EA Sports UFC 4 arrives August 15 worldwide and to mark its release, EA Sports is inviting fight fans to watch some big names step into the virtual octagon. Just like the UFC 4 roster is full of big names and fighters, the EA Sports UFC Virtual Fight Card Live packs a serious punch when it comes to star power.

First up, we have Instagram’s Behzinga against former NFLer and sports personality Spice Adams. Next, a pair of matches for the wrestling fans — the Bella Twins will face off against one another and Kenny Omega will be taking on Twitch streamer Lirik. After that, UFC legend Max Holloway will take on comedian Hannibal Buress in a fight that promises lots of punches and punchlines. Then UFC superstar Jorge Masvidal will take on rapper Action Bronson in a bid for NYC vs Miami bragging rights. And last but not least, a Hollywood heavyweight in Idris Elba takes on a real heavyweight from the boxing world, Tyson Fury, in a battle of Brits you won’t want to miss.

In addition to all of these great virtual fights, there will be exclusive information about EA Sports UFC 4, newly released footage and videos, and appearances by other surprise celebrities — plus viewers at home will have a chance to win swag and prizes by watching and interacting on social media.

It’s EA Sports UFC Virtual Fight Card Live, and it all goes down starting Friday, August 14 at 7:30 PM ET on ESPN2, the UFC Twitch channel, and on the UFC YouTube page. We’ll see you at the Octagon! 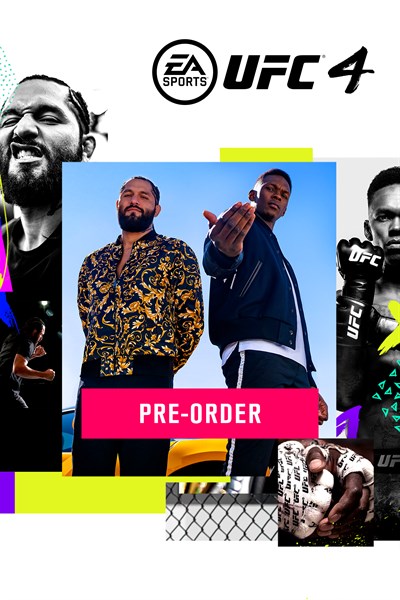 ☆☆☆☆☆ 198
★★★★★
Get it now
Shape Your Legend in EA SPORTS™ UFC® 4 Pre-Order EA SPORTS UFC 4 today and receive: – Tyson Fury – Anthony Joshua – Backyard Customization Pack – Jean Print Shorts – Backyard Camo Shirt – Backyard MMA Gloves – Skull Cap – Gold Chain – Kumite Customization Pack – Kumite Gladiator Shorts – Kumite Cobra Shirt – Rope Gloves – Cobra Mask – Kumite Necklace In EA SPORTS UFC 4 the fighter you become is shaped by your fight style, your achievements, and your personality. Develop and customize your character through a unified progression system across all modes. Go from unknown amateur to UFC superstar in the new Career Mode, experience the origins of combat sports in two all-new environments; The Kumite and The Backyard, or challenge the world in new Blitz Battles or Online World Championships to become the undisputed champ. In gameplay, fluid clinch-to-strike combinations offer more responsive and authentic stand-up gameplay, while overhauled takedown and ground mechanics deliver more control in those key phases of the fight. No matter how, or where, you play EA SPORTS UFC 4 puts ‘you’ at the center of every fight. CONDITIONS AND RESTRICTIONS APPLY. SEE https://www.ea.com/games/ufc/offer-disclaimers FOR DETAILS.