To celebrate the release of Rover Wars: Battle for Mars, Sakari Games is throwing a massive online competition with streamers battling it out for glory — and some nice goodies on the side. Join us in the fun by cheering on your favorite players and scoring some loot in the process. Go to www.roverwars-release.be for more information.

How does it work? Well, when the time is right (10 a.m. PST), you just show up at our Twitch channel and find yourself represented as a tiny robot on the stands. You decide what’s your favorite team and who will benefit from extra firepower because of your support. Lean back, break out the popcorn and see the explosive action play out before your eyes.

The competitors are a rowdy, fun bunch from the Belgian streaming community. Belgian? Yes! Sakari Games are a Belgian studio located in the lovely city of Antwerp. Especially during these times, we like to support the locals and rest assured that they love the cartoony death and destruction of Rover Wars just as much as you. By the way, you don’t have to be on the stands. You can also join the interactive chat and show your support that way.

So let me tell you about Rover Wars: Battle for Mars. It’s what we like to call a “casual-fast-paced-real-time-co-op-strategy-couch-party-game.” It’s like a MOBA and RTS-game had a baby. A hyperactive, highly explosive baby. The goal? To destroy your opponent’s base. To do that you need an army. With resources you collect on the battlefield you can build three types of factories. These factories poop out minions that will find their way to your opponent’s buildings and destroy them.

Sounds easy enough right? Right! You don’t have to spend hours learning all the intricacies of the mechanics, jump right in the explosive cocktail of action and strategy. Find the tactics that work for you and keep an eye on your resources. Will you use them all for new factories or will you save enough to unleash the devastating Death Ray? It’s up to you!

Rover Wars was clearly developed for intense, adrenaline filled battles that last for half an hour to an hour. With it’s neat local multiplayer system it allows up to 8 players to join the game. To avoid couch conflicts you can always call on the brilliant AI to battle cooperatively. To spice things up (and to annoy your friends) you can even switch teams or add some AI during a match! There’s also a campaign mode for the solitary gamer.

So join the online launch event and check out the action. If you like what you see you can start your own Rover Wars today. See you on the battlefield! 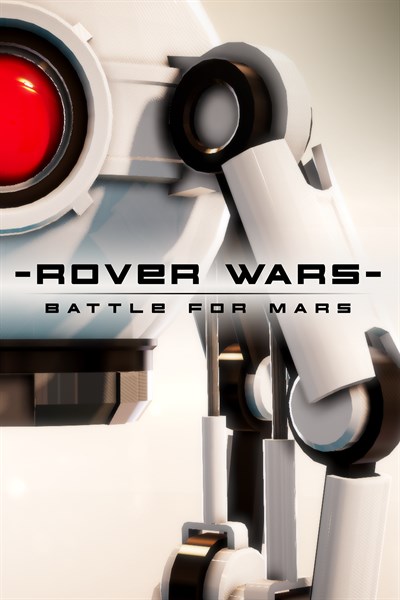 ☆☆☆☆☆ 20
★★★★★
$6.99
Get it now
Xbox One X Enhanced
If you are up for a casual yet spicy cocktail of action and strategy, but not planning to spend hours learning how to play, then Rover Wars might just be your thing. You jump straight into the action with your little Rover to start building factories and hurting enemy units. The tactics in the game are in resource management and the placement of factories. Factories poop out minions that will find their way to the enemy facilities and destroy them. Once you destroy the enemy base, you win. simple. Rover Wars has a neat local multiplayer system. It allows up to 8 users to join the game. To avoid couch conflicts we implemented some brilliant AI to battle cooperatively. There are always 2 teams and each side has a maximum of 4 Rovers. During battle, players can even switch teams or add some AI.