Arthurian legends tell of the Queen of Avalon. She is a powerful enchantress, once a healer and ally to King Arthur and a disciple of Merlin. However, as those tales were told throughout different times and places, the enchantress became more sinister, fueled by revenge.

Morgan Le Fay is an expert of dark magic and as her powers grew, so did her desire for control. She turned against the Pendragon family, and with magic that could manipulate one’s body and mind she became a fearsome enemy who could slay any knight.

Morgan Le Fay has been watching as Arthur and Merlin rise among the ranks of the Olympians, and she is not about to let them gain more followers without a challenge. The time has come for Morgan Le Fay to take the throne.

Morgan Le Fay is a ranged mage with some unique gameplay features that stem from her lore — with a few twists. First and foremost, she is a dark magic caster – etching powerful sigils to damage and suffer her enemies. Much like her teacher Merlin, Morgan Le Fay has an ability that allows for casting three different kinds of magic: Mind, Body, and Soul. This ability pairs with skills of conjuring wildfire and summoning a dragon apparition, just as you’d expect from a talented sorceress.

Then we added a twist. Instead of a more stereotyped design, we added heavier armor and a magical sword to make sure Morgan Le Fay was battle(ground) ready. In her mythology, there is a story where Morgan Le Fay tried to steal Excalibur. In our interpretation, she wields the evil twin to Excalibur. This magical sword that floats, or can be wielded by hand, has multiple different empowered states: creating a weapon worthy of standing against Excalibur while fitting Morgan Le Fay’s style of dark, emblazoned magic.

This update also includes the final chapters of the Talons of Tyranny Event, the Independence Chest featuring Dread President Cthulhu and The Eagle’s Elbow Camazotz, and the Gecko Guardian Bundle. Connect with nature in mind and soul with the meditative Gecko Guardian Ymir Skin. Plus: unlock the Gecko Guardian Avatar and 400 Gems.

We hope that you enjoy the newest Goddess in Smite as well as all the other great content that the team has worked on. See you on the battleground! 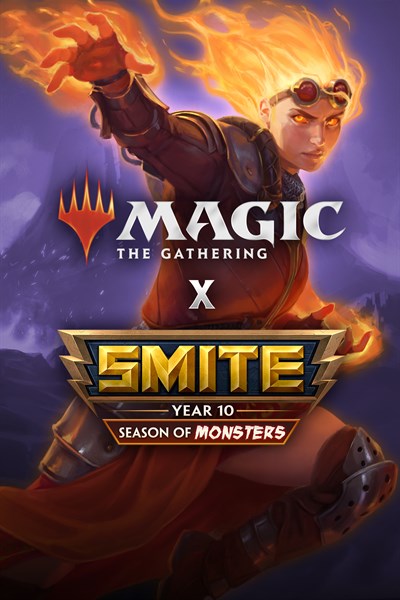 ☆☆☆☆☆ 1506
★★★★★
Get it now
Xbox One X Enhanced
Enter the Battleground of the Gods Join 35+ million players in SMITE, the world’s most popular action multiplayer online battle arena. Become a legend of myth, enter the Battleground of the Gods, and play FREE now! 100+ Gods Unleash each deity’s unique strategies, legendary weapons, and earth-shattering powers. Rain lightning down upon your foes as Zeus or strike from the sky as Thor. Which God will you choose?" Unique Perspective Unlike other MOBAs, SMITE puts you directly onto the battlefield with a third-person action viewpoint. From blind-side ambushes to aimed shots, a new pantheon of strategic possibilities awaits. © 2012 – 2023 Hi-Rez Studios, Inc. "SMITE", "Battleground of the Gods", "Titan Forge Games", and "Hi-Rez Studios" are trademarks or registered trademarks of Hi-Rez Studios, Inc. in the U.S. and/or other countries. All trademarks and copyright material are property of their respective owners. All rights reserved. Magic: The Gathering, it’s logo, and all characters’ names and distinctive likenesses are property of Wizards of the Coast LLC. ©2022 Wizards. All Rights Reserved.