One of the biggest benefits of all that power in the hardware is giving developers the ability to make games that are Xbox Series X|S Optimized. This means that they’ve taken full advantage of the unique capabilities of Xbox Series X|S, both for new titles built natively using the Xbox Series X|S development environment as well as previously released titles that have been rebuilt specifically for the console. In our Inside Xbox Series X Optimized series, these creators will share the behind-the-scenes accounts of how they’re optimizing their titles for Xbox Series X|S and what that means for the future of gaming. Today, we’ll be chatting with 4A Games about optimizing Metro Exodus Enhanced Edition for Xbox Series X|S, available now.

Q: What excites you most about developing and bringing an Xbox Series X|S Optimized version of Metro Exodus to life on next-generation hardware?

A: Since the original release of Metro Exodus and the introduction of real time ray tracing to gaming, where we pioneered RTGI with our friends at Nivida, we’ve been all-in for a fully ray traced future. The new Xbox Series X|S hardware allows us to bring that vision to our console fans for the first time which we’re really excited about.

Players will be able to experience Metro Exodus in 4K/60 on Xbox Series X with the next evolution of our RT tech – a significant step up from the original PC release – with every light source ray traced, emissive lights including fire, and optimized specifically for the Xbox hardware. Building this upgrade for the Xbox version has also given us critical insight for building our next experiences to fully take advantage of this new hardware, and we’re excited to bring the Metro franchise to new audiences looking for a tech showcase that really shows of the power of the new generation of Xbox hardware.

Q: In addition to benefiting from the power and performance of Xbox Series X|S for quicker load times etc. what Xbox Series X|S features were you most excited to explore leveraging in the development of Metro Exodus Enhanced Edition?

A: Having ray tracing support on consoles is a game changer. It was a game changer on PC and now that we can bring this new tech to console gamers, it changes how we develop games from the ground up. We see ray tracing as the future and now that Xbox has made it accessible to their gamers, everyone wins. We get to continue to push the envelope for what’s possible as developers, and gamers get to enjoy better, more realistic experiences.

Ray tracing won’t only help with visuals as it has already – the development community, 4A Games included, is already working on ways to expand on this new tech. Quicker load times from the new SSD is also a huge benefit to players of large games, particularly games with large or dense environments that typically need a lot of resources to load. We’ve managed to get a dramatic reduction in load times for Metro Exodus, up to 80% in some cases when loading full chapters, or a 3-4x improvement in best cases and all quick load times (returning from death) should be reduced to 10 seconds or less, in some cases nearly instant.

Q: How will these enhancements impact a player’s experience with Metro Exodus Enhanced Edition?

A: Console players can now experience Metro Exodus in a way that was previously only possible for enthusiast PC players who owned Ray Tracing capable video cards – 4K, rock solid smooth 60fps, and full ray tracing throughout. The new capabilities of the Xbox Series X|S allow us to bring these previously exclusive features to more players for the most immersive and smooth experience.

Q: Why did your development team choose to focus on as enhancement areas for Metro Exodus Enhanced Edition?

A: We had two key goals: Full ray tracing and 60fps. As we see ray tracing as the future, this priority should be obvious. We’ve been all-in on ray tracing from the beginning and we wanted to bring this tech to our console fans now that the hardware is there. Metro Exodus took the last generation hardware and stretched it to the max, literally we squeezed out the last bits of resource we possibly could, but it meant the game had to run at 30fps.

Now that we have a lot more power to work with, giving players a smooth 60fps was really important to us to ensure that the play experience was now as solid as it could be. Included in maxing out the capabilities of the last generation, was the load times. We acknowledge that our load times were not ideal on the gen8 hardware, especially when you compared to load times on most PC configurations out there. The new SSDs have allowed us to drastically improve load times to bring them much more in line with what most PC players were capable of experiencing – up to 80% better in some cases, and all quick load (ie: after death, reload in-level) times are less than 10 seconds, some instant.

Q: How do you expect fans of Metro Exodus Enhanced Edition will respond to playing it on Xbox Series X|S with these optimizations?

A: It is a transformative experience. It’s never been a better time to replay, especially if you only got one ending last time… hint hint.

A: Xbox Series X has been nothing short of great, especially for all the things we wanted to do with this upgrade as it is a clear upgrade from all versions of Gen8 hardware. We’re also happy with the results on Xbox Series S and how we were able to balance our goals for this console, prioritizing Ray Tracing and 60fps, and we’ve managed to accomplish both on the Xbox Series S.

Q: Which enhancement were you most excited about to explore leveraging for Metro Exodus Enhanced Edition on Xbox Series X|S?

Q: What does Smart Delivery mean for your game and how you’re bringing Metro Exodus Enhanced Edition to fans?

A: If you already own Metro Exodus on Xbox One, you get all the enhancements for free on your Xbox Series X|S seamlessly. It’s a great system and really rewards players who jumped in Day 1.  Players will be able to seamlessly continue their chapter progress on the Xbox Series X|S without additional steps, start a new save slot and play through again for a different ending, or they can even start a new save slot unlock all chapters to mess around and see the improvements in later levels.

A: Our future titles are being built with a brand-new lighting pipeline that puts ray tracing first and that was not possible two years ago when we originally released Metro Exodus. Having developed this upgrade for the Xbox Series X|S, we got a bit of a trial run in for seeing what this new hardware is capable of, which is a luxury these days and will help us a lot to know what we are able to do for our future titles and how we can do it.  We have more upgrades coming to our engine in the future and knowing from the start what we have available to us is invaluable. 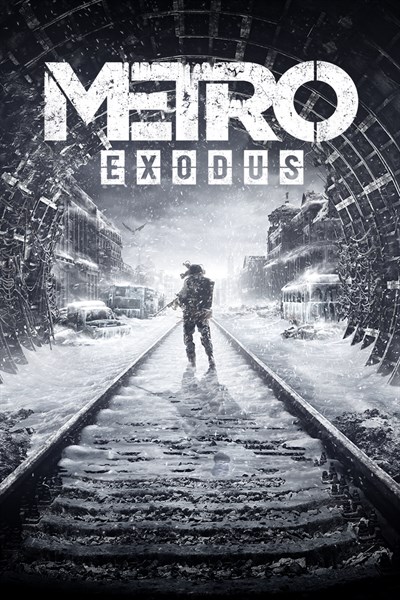 ☆☆☆☆☆ 440
★★★★★
$29.99
Get it now
Xbox One X Enhanced
Metro Exodus is an epic, story-driven first person shooter from 4A Games that blends deadly combat and stealth with exploration and survival horror in one of the most immersive game worlds ever created. Explore the Russian wilderness across vast, non-linear levels and follow a thrilling story-line that spans an entire year through spring, summer and autumn to the depths of nuclear winter. Inspired by the novels of Dmitry Glukhovsky, Metro Exodus continues Artyom’s story in the greatest Metro adventure yet. Embark on an incredible journey – board the Aurora, a heavily modified steam locomotive, and join a handful of survivors as they search for a new life in the East. Experience Sandbox Survival – a gripping story links together classic Metro gameplay with new huge, non-linear levels. A beautiful, hostile world – discover the post-apocalyptic Russian wilderness, brought to life with stunning day / night cycles and dynamic weather. Deadly combat and stealth – scavenge and craft in the field to customize your arsenal of hand-made weaponry, and engage human and mutant foes in thrilling tactical combat. Your choices determine your comrades’ fate – not all your companions will survive the journey; your decisions have consequence in a gripping storyline that offers massive re-playability. The ultimate in atmosphere and immersion – a flickering candle in the darkness; a ragged gasp as your gasmask frosts over; the howl of a mutant on the night wind – Metro will immerse and terrify you like no other game…