For those of you who weren’t already set to put your quarter on the machine, Capcom Fighting Collection features ten different fighting games straight from the arcade, including two Darkstalkers games never released outside of Japan. Each game also supports online play with rollback netcode, making it easy to put your skills to the test and prove you’re the best around.

Pre-ordering will also get you a combo of bonuses, including 18 music remixes by artists including Cap-Jams, Knxwledge, Mndsgn, Keizomachine!, Olive Oil, and Matt Cab. Plus, exclusive new illustrations by Yuri Kataiwa, Sakutamo, Ryuji Higurashi, Tamio, and Chisato Mita are included, featuring various characters from each game in the collection in each artist’s trademark style!

We’ve got more information on all ten games included in Capcom Fighting Collection here. Today, we’re talking about two absolute gems in this collection. It’s all fun and games until someone gets an 8-chain. Puzzled by that one? Well, let’s get you up to speed with…

For many, this game needs no introduction, but for those who aren’t familiar, Super Puzzle Fighter II Turbo takes familiar faces from Street Fighter, Darkstalkers, and a few other Capcom fighting games, and smashes them together in… a puzzle game!

Instead of directly attacking your opponent, you’re dropping gems on a board to crush your opponent. When a Crash Gem appears, matching it to the same color will smash all the connected gems of that color as an attack, complete with your chibi-fied character unleashing their own unique moves to match. In classic puzzle game style, the person whose stack reaches the top of the screen will lose the round… and in classic fighting game style, whoever wins two bouts first wins the match! It’s brains over brawn in this one, so you’ll need to carefully position individual gem drops to create even larger gems, use cascading Crash Gems to trigger combos, and send plenty of Counter Gems over to your opponent before they have a chance to retaliate!

Each character has their own pattern of Counter Gems that they send to an opponent, so picking the right character for your strategy is key. Playing against the CPU will also display unique – and typically outlandish – story introductions and endings for each character. Where will Ken’s quest for fortune and fame lead him? Can Felicia make it to the Broadway stage? Will Ryu find the answer in the heart of (puzzle) battle? There’s only one way to find out!

Legend has it that a certain master of Saikyo-style is playable, too, though picking him as your character might have you seeing red.

Love the chibi aesthetic of Super Puzzle Fighter II Turbo, but miss the fighting? You can get the best of both worlds thanks to Super Gem Fighter Mini Mix! Featuring a roster of miniaturized characters returning from Puzzle Fighter as well as a few newcomers, Gem Fighter is a total mix-up of fighting game flair and absurd additions to everything you think you know about head-to-head gameplay.

In traditional fighting game style, you’ll have access to a punch button, a kick button, and a variety of special moves… but that’s where the similarities end. Combos can be executed with a single button or a mix of punches and kicks, allowing you to string together attacks while your character goes through a wild variety of animations and even costume changes!

Each attack that connects with an opponent also sends gems flying around the screen. Picking up gems will power up your special abilities and can have unique effects on moves as well, such as transforming Ryu’s shoryuken into a stunning electric uppercut. You’ll also want to keep an eye out for health-restoring items, orbs you can toss at opponents, and all sorts of Capcom references in character animations, KOs, background elements, and more. With gems flying everywhere, items that can turn a match around, and moves that power up over the course of a match, it’s a game that fighters of all skill levels can enjoy!

That’s all for now, but if you’re ready to put that quarter on the machine with an “I got next,” be sure to pre-order Capcom Fighting Collection so you’re ready to crush it on June 24 when the 10-game collection drops on the Xbox Store! 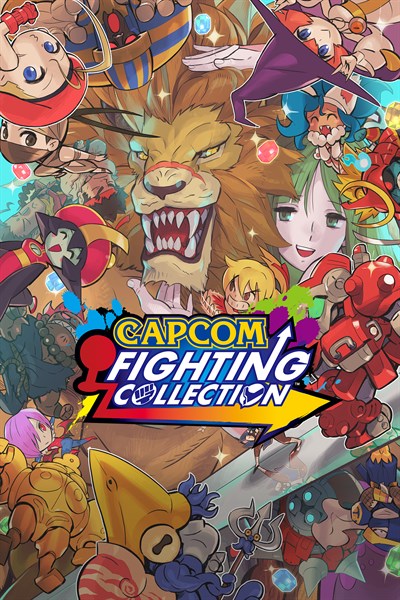 ☆☆☆☆☆ 33
★★★★★
$39.99
Get it now
Ten of Capcom's most popular arcade games in one epic collection! A wide variety of titles are included from iconic series such as Street Fighter and Darkstalkers, Cyberbots, and the first home console port of Red Earth! And of course, all titles support online play! This is the perfect collection for both arcade veterans who remember the titles, and those who want to get into them for the first time! ■ Fully-featured online modes Players can aim to top the global leaderboards in ranked matches, or create a lobby with friends for casual games or just spectate some exciting matches. Supported with a robust Rollback netcode which offers a stable and smooth online experience. ■ First-timers welcome Beginner-friendly features such as training mode and one-button special move control options are included. You can also save and load any time for a quick do-over! ■ Additional content: The Museum This archive features more than 500 illustrations and development materials across the 10 included titles. It also includes concept art that has never been shown to the public before, and behind-the-scenes materials that give a glimpse into the development process. Not only that, you can listen to over 400 music tracks recorded from the arcade versions of each title.  Included game titles (Japanese and English versions selectable for most titles *1) Darkstalkers: The Night Warriors Night Warriors: Darkstalkers’ Revenge Vampire Savior: The Lord of Vampire Vampire Hunter 2: Darkstalkers’ Revenge Vampire Savior 2: The Lord of Vampire Hyper Street Fighter II: The Anniversary Edition Super Puzzle Fighter II Turbo Super Gem Fighter Mini Mix Cyberbots: Full Metal Madness Red Earth (*1 Vampire Hunter 2: Darkstalkers’ Revenge and Vampire Savior 2: The Lord of Vampire are Japanese versions only) Early purchasers will get the following bonus content. Enjoy additional original content created by some great artists! Museum Bonus Content Each will be downloaded to the in-game "Museum". 5 exclusive new illustrations by: Chisato Mita Yuri Kataiwa Ryuji Higurashi Tamio SAKUTAMO 18 remixed music tracks by: CAP-JAMS (8 tracks) Knxwledge (6 tracks) Mndsgn (1 track) KEIZOmachine! (1 track) Olive Oil (1 track) Matt Cab (1 track) Capcom Arcade 2nd Stadium: Three Wonders As a bonus title, get Three Wonders for the second Capcom Arcade Stadium title, featuring a recreated arcade full of authentic cabinets to play. Coming soon with a new lineup of masterpieces! *It is required to download "Capcom Arcade 2nd Stadium" (free download) in order to access Capcom Arcade 2nd Stadium: Three Wonders. *Players can get this bonus content if they purchase before September 30, 2022 23:59 PT. Capcom Arcade 2nd Stadium rated TEEN with Blood and Gore, Mild Language, Partial Nudity, Suggestive Themes, Use of Tobacco, Violence / In-Game Purchases