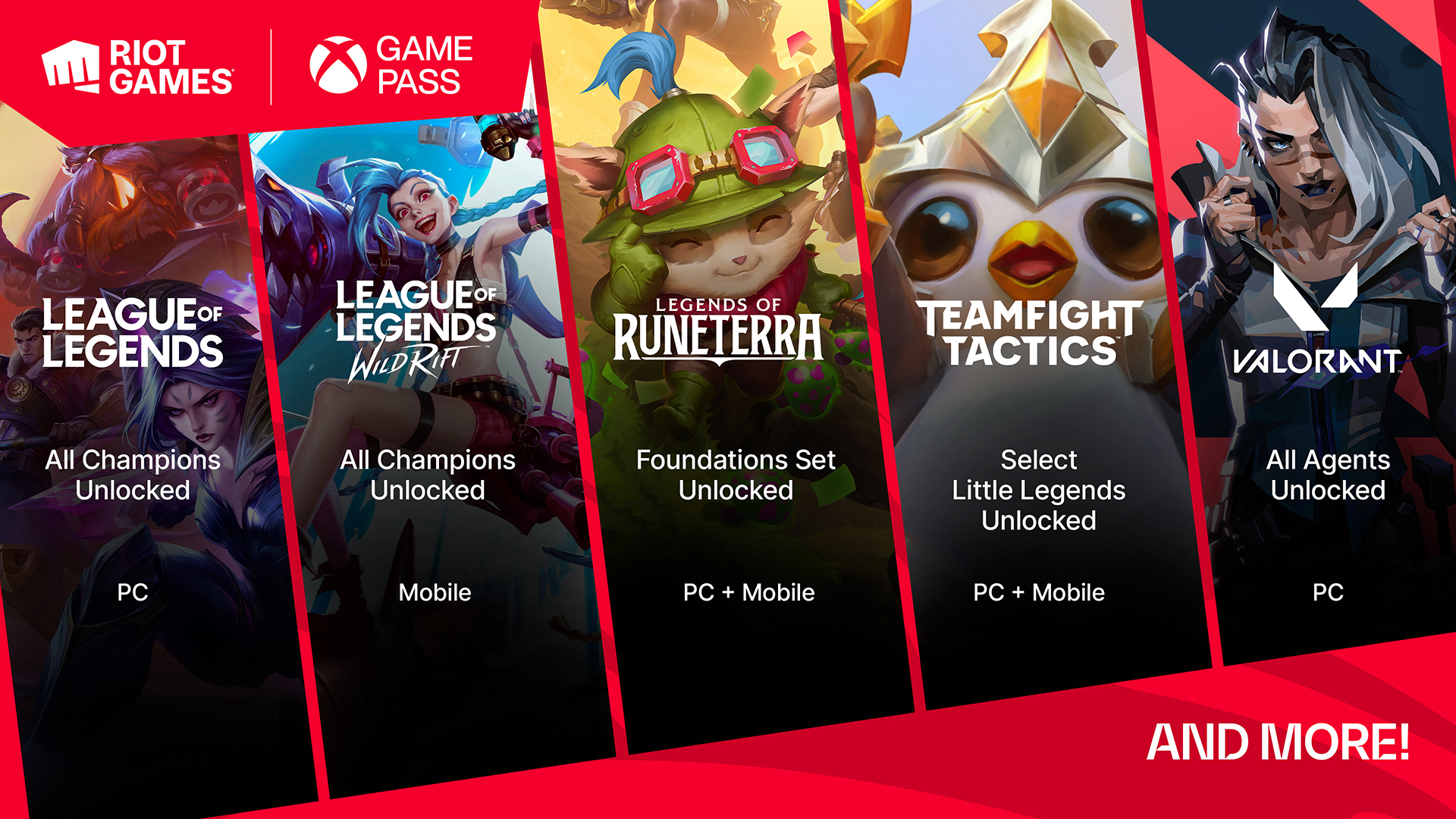 The Riot Games and Xbox communities are coming together to bring amazing content for Game Pass members.

Today, Riot Games and Xbox announced that Riot’s biggest titles are coming to Game Pass this winter. We’re bringing together two of the biggest communities in gaming onto one platform.

In a first for Game Pass, the partnership extends beyond Riot’s PC games to include Riot’s mobile-only and mobile-accessible titles. All Game Pass members will be able to play:

One of the most-played competitive games in the world. A mainstay of the MOBA genre, in League, two teams of five powerful champions face off to destroy each other’s base in a game that blends speed, strategy, and intensity. With Game Pass, members will unlock all 160+ champions plus get day-one access to each new champion as it’s released.

Built from the ground-up for mobile, League of Legends: Wild Rift brings the classic 5v5 MOBA gameplay of League of Legends to mobile devices, with fresh controls and a streamlined feel designed for touchscreens. Game Pass members will unlock all 80+ champions plus grant day-one access to every new champion.

In this strategy card game, skill defines your success. Mix and match iconic champions, allies, and regions of Runeterra to unlock unique card synergies and outplay your opponent. With the unlocked Foundations Set, Game Pass members get a head start on this free-to-play friendly PVP card game.

TFT is an auto-battler strategy game where players combine League champions and items in limitless formations to defeat the seven other players in a match. Game Pass members will get access to a rotation of Tier One Little Legend avatars.

Blend sharp gunplay and game-changing tactical abilities in Valorant, Riot’s fast-growing 5v5 character-based tactical shooter. Take on foes across Competitive and Unranked modes as well as Deathmatch and Spike Rush. Game Pass members will unlock all 18 agents and get access to all new agents on day one.

We’ve always respected Xbox’s relentless push to drive gaming forward, and we’re proud to add our games to the Xbox catalog through Game Pass. We’re also thrilled to welcome Xbox players into Riot’s ecosystem of diverse and passionate gamers across the world.

In the coming months, we’ll share more about the partnership and how members can access the Game Pass content. For more information on Riot’s biggest titles coming to Game Pass, stay tuned to riotgames.com and Xbox Wire.