Wait no more! Last month, we promised to bring the first episode of Hulu’s new original series “The Awesomes” first to Xbox, before it launched anywhere else (including Hulu.com and Hulu Plus), and today we’re making good on that promise. More than that, we’re making it free…to everyone. In addition to making it available to anyone with an Xbox 360 and internet connection in the U.S., we’ve made it super easy to find on the Xbox Live dashboard. All you need to do is sign-in to Xbox Live any time during the next week, click on the big “The Awesomes” tile, and it will take you directly to the episode – no need to have Hulu Plus installed. The highly anticipated show is all Xbox’s until it’s made available to the rest of the world via Hulu Plus on Aug. 1. I have to say, the full episode is pretty funny. I got a sneak peek at Comic-Con last week (more on that below), which is no surprise since it’s co-created by two really funny guys: Seth Meyers (“Saturday Night Live”) and Michael Shoemaker (“Saturday Night Live” and “Late Night with Jimmy Fallon”).

For those that haven’t heard, “The Awesomes” is an animated series for adults about the greatest superhero team ever – after all the good members quit. With the voice talents of current and past SNL stars and other talented cast members, including Seth Meyers, Bill Hader, Kenan Thompson, Taran Killam, Josh Meyers, Bobby Moynihan, and Rashida Jones, the show introduces a group of not-so-super heroes who just might find a way to save the world.

In addition to getting a chance to watch a full episode at Comic-Con, Xbox partnered with Hulu on the show’s launch event. Below is a quick recap, with some pretty funny moments with Seth Meyers: 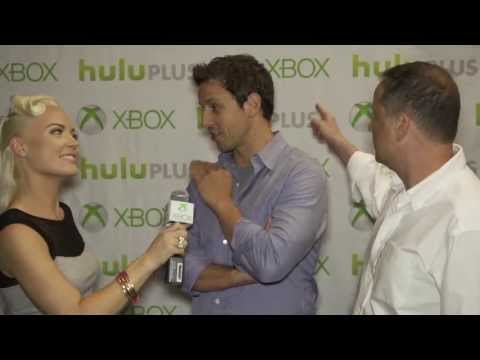