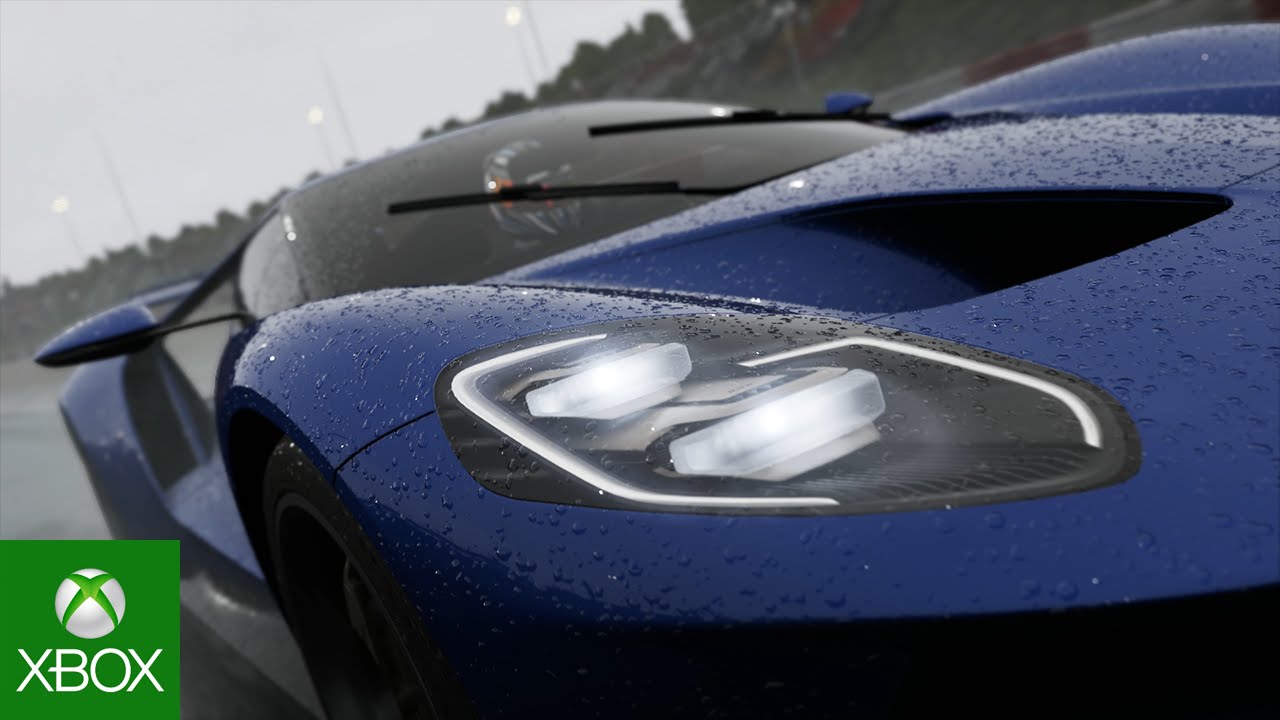 We’ve all been there. You’re in a rush to get to work in the morning, and you figure you’ve got 20 minutes to spare. You haven’t bothered to check the weather forecast, though – big mistake. The second you throw open the door, you’re hit with a deluge of drops from above.

Reality hits: This is gonna take a lot longer than 20 minutes.

Now imagine trying to build the same type of battle you face during a rainy commute into Forza Motorsport 6, a high-powered racing simulation. It’s an extraordinarily complicated process to integrate the speed and power of the vehicles with the physics of falling raindrops, water spray exploding from the sides of competitors, and the brutal collision when tires meet a deep puddle in the middle of the road.

Yes, wet-weather driving is a science… quite literally. Not only do the developers at Turn 10 Studios have five Forza entries under their belts, but they also need to deal with 140 days of rain per year while driving to their Seattle-area office. Now – thanks to the power of the Xbox One, the foundation that Playground Games built in Forza Horizon 2, and an insane amount of research from Turn 10 – the premier driving simulator is finally getting wet. In Forza Motorsport 6, players will get a taste of what it’s like to fight the elements as an elite racer taking control of the latest high-tech supercars.

And make no mistake: It’s a tough task, even for the best of the best. When the track gets wet, the challenge ramps up… and it’s not necessarily about how fast you are. It’s about how well you can navigate the inclement conditions with a car on either side – and a flooded track heading straight at you.

For the veterans at Turn 10, however, it wasn’t about checking off a list of wet-weather features. It was about implementing the right ones to properly impart the feelings and emotions of wet-weather racing. Put simply, it can be a harrowing experience, which Forza Motorsport 6 captures with the reliance on squinting at brake lights through the deluge or dealing with furiously swishing windshield wipers in first-person cockpit mode. In inclement conditions, you don’t simply win a race. You survive.

It’s also important to remember that Forza is a simulation at heart, so if you simply plow into one of the game’s fully simulated 3D puddles like it’s a soggy decoration, you’ll spin out immediately. Turn 10 went all-out here, researching the game’s 148 different drivable surfaces based on how they absorb water and what sort of traction they provide when they’re wet – grass, gravel, rumble strips, tarmac, cement, asphalt, dirt, and so many more. Turn 10 created different values for “wet” and “dry” for each one of these surfaces, and that difference shows throughout a race. You’ll hydroplane as you skid across asphalt, and struggle to escape when you’re trapped in the mud.

All rain droplets are physically simulated and velocity-based, and the dynamic rain adjusts with the direction of the car. You’ll have to brake earlier and be careful accelerating out of corners, which can cause oversteering in the rain. These new challenges even extend to Drivatars, which need to learn to avoid puddles based on player tendencies. On their own, these A.I. racers don’t always know how to handle them, which illustrates just how well Turn 10 has changed the rules of the race in Forza Motorsport 6.

And when you come across a portion of the raceway that’s been partially flooded, you’ll have to figure it out on the fly. Should you aim to avoid the water altogether? Should you slow down? If so, how much? And how about your competitors on the road? How are they handling the wet-weather hazards, and can you exploit their strategies in any way? Of course, there are times when puddles will cover entire portions of a track, in which case you’ve got no choice but to challenge them head-on. Forza players will learn the best tactics in the coming weeks and months, but it’s quite a task with 24 cars on the track at 60 frames per second.

So how did Turn 10 manage to make wet-weather conditions so authentic in Forza Motorsport 6? They looked at archived real-life race footage, talked to professional drivers, and measured the tracks themselves. The team even went to Brands Hatch in Southeast England – a Forza Motorsport 6 raceway known for its exceedingly gloomy days – and captured what the track was like in a torrential downpour.

Turn 10 also made sure that their vehicles’ tires performed accurately in wet-weather conditions: Wide tires hydroplane more, while thinner tires sink into the water. And with 460 vehicles in total, that means a ton of choices for players to experiment with on different courses. You may find that the winning racing line on a clear sunny day at Le Mans will send you into the barriers when the skies open up.

Of course, the folks at Turn 10 can do all the research possible, but they still don’t have hands-on, professional experience on race day. That’s why they brought in Josef Newgarden, an IndyCar driver from CFH Racing, who’d won the 2015 Honda Indy Toronto in wet-weather conditions just days before he visited the studio. Newgarden was immensely impressed with what he saw and played, and he said that even the simulator he trains to prepare for races on doesn’t have a built-in wet-weather simulator.

Forza has always delivered authentic vehicles and courses, but with Forza Motorsport 6, players are finally getting that same level of detail in the racing conditions themselves – take it from Josef Newgarden himself.