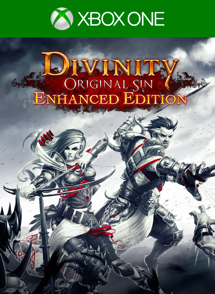 Game Description: XBOX ONE GAME EXPECTED TO RELEASE ON 10/27/2015. YOU MAY DOWNLOAD THE GAME FROM XBOX LIVE BEFORE THEN, BUT IT WILL NOT BE PLAYABLE UNTIL 12:01 AM EST ON THE RELEASE DATE.

Divinity: Original Sin returns with a host of new and enhanced content. Larian’s succinctly cooperative adventure receives a console make-over with a new intuitive user-interface and dynamic split-screen for co-op, as well as a plethora of new content; quests, combat-styles, locations, changes to the crafting system and story situations breathe new life into the already expansive world of Rivellon. Easing a new generation into the world of cRPGs, Original Sin: Enhanced Edition features isometric, party-based gameplay, turn based combat, and hours of fully voiced and remastered dialogue in a story that will have you embroiled in a fantasy world of free exploration thanks to a new split-screen friendly UI. Pre-Order and receive Grumio’s Forgotten Trick Bag.