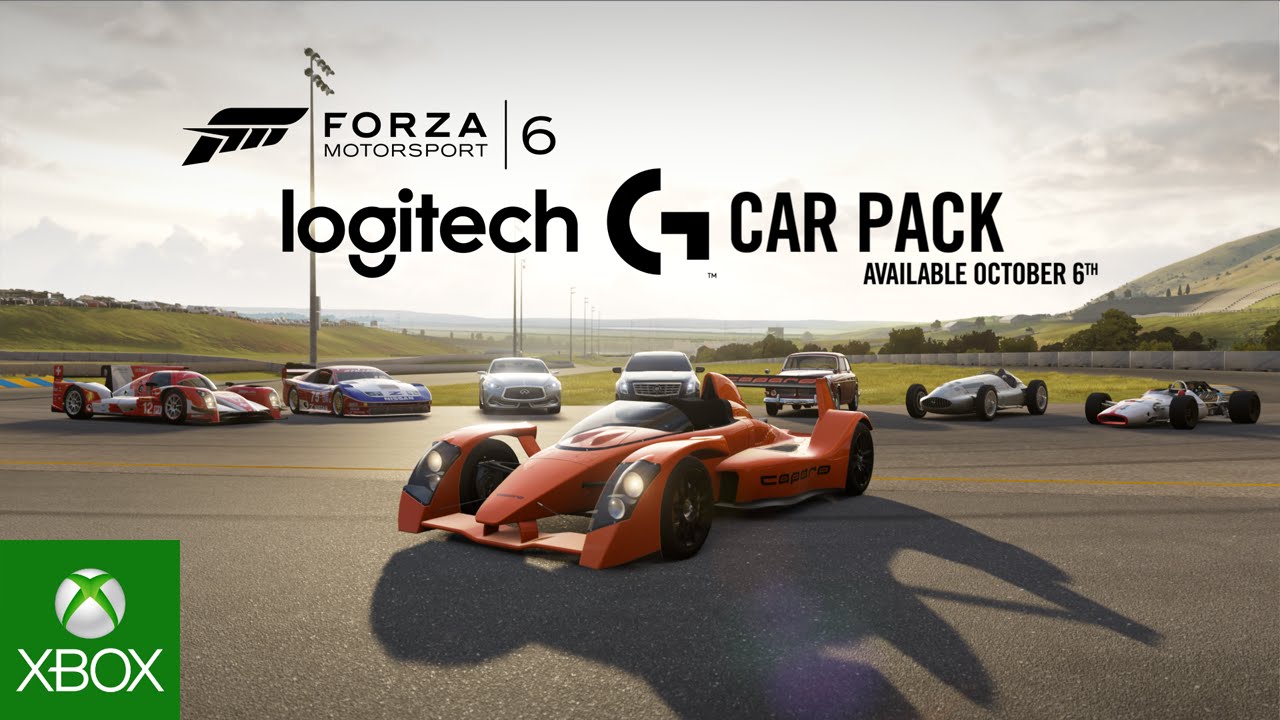 Since September, gamers have been conquering the pavement in Forza Motorsport 6, the most beautiful and comprehensive racing game of this generation. If you haven’t had a chance to play the game, now is a great time to jump in with race fans from all over the world. As we head into another great month of racing, we’re excited to announce that beginning today, the Logitech G Car Pack is available as the next great add-on pack for Forza Motorsport 6. With seven incredible cars that have each carved their own place in motorsport history, the pack offers a new way to enjoy the best racing experience on Xbox One.

Leading the pack is an ultimate track toy – the 2013 Caparo T1, which is just begging to tackle the circuits of Forza Motorsport 6. In addition, we have four different eras of historic racing represented, with the 1939 Mercedes-Benz W154 (a pre-WWII Grand Prix champion), the 1967 Honda RA300 known as the “Hondola,” a turbocharged Nissan IMSA racer from the 1990s, and one of the latest Le Mans prototype cars.

The remaining cars of the pack offer equally unique driving experiences. The 1967 Volvo 123GT has its own on- and off-road race-bred roots and the 2013 Cadillac XTS Limousine – well, we know you’ll have fun with it.

The Logitech G Car Pack is just the first great pack of monthly DLC cars that players can expect in Forza Motorsport 6. If you want to be on top of all the latest car content in the game, there’s no better way than the Forza Motorsport 6 Car Pass, which brings you six monthly car packs with seven cars each. That’s 42 amazing cars total, all waiting to be collected, customized and raced, for one low price!

As a reminder, Logitech’s new G920 Driving Force Racing Wheel is also now available for Xbox One. We’ve been enjoying this new wheel for a little while now, both around the office and at Xbox events this summer, including the Forza Fuel Challenge, which put the top Forza gamer head-to-head against Audi factory driver Benoît Tréluyer.

To celebrate the release of the Logitech G Car Pack for Forza Motorsport 6, we’re holding a special contest in association with our partners at Logitech. All you have to do is create a video in Forza Motorsport 6 with one or more of the cars from the Logitech G Car Pack, then post it to YouTube. From there, let us know about the video by linking to it on Twitter and using the hashtag #LogitechGForza6.

The video with the most views at the end of the contest period, November 6, will be declared the first place winner, with the second-most viewed video winning second place, and so on. The creators of the top ten videos in this contest will be eligible for a slew of awesome prizes from our friends at Logitech:

Owners of the Forza Motorsport 6 Car Pass will receive the Logitech G Car Pack at no additional charge. Everyone else can purchase the pack separately for $7 or buy cars from the pack individually from the Xbox Live Store or through the Forza Hub app for Xbox One.

At a glance, the Caparo T1 is space age, looking like it could blast into the atmosphere at any moment. If not for its multiple wings and foils creating downforce, the T1 could certainly achieve flight. As the 3.5-liter turbo-charged V8 spins up to 10,500 rpm, you might just think it’s the scream of a pure turbine engine rocketing you to Formula One speeds. The T1 is not far from the cars of F1. Underneath its thin carbon fiber skin, Caparo’s masterpiece is nothing short of an open-wheel racecar with an extra seat. The T1 is the brainchild of a pair of engineers who heavily contributed to the development of the McLaren F1. Their goal was to build a Formula One car that could be driven on the street, but the Caparo T1 is more at home on any track with its ultimate track toy brethren. Be sure to hit the Forza Motorsport 6 Rivals mode specially designed for the T1 once you’ve added the pack to your garage.

The storied history of Mercedes-Benz racing was cemented by cars called the “Silver Arrows,” pre-war racers like the W154 whose aluminum-skinned bodies flashed through the European racing circuits. This was an era of racing greats like the “Rainmaster” Rudolf Caracciola, who piloted one of the W154s. The W154 was the product of a rule change in the European Championship that excluded cars over 3.0 liters with a supercharger. Rather than just build a new engine, Mercedes built a new car: the W154. 1939 was the second year for the W154, which now had a two-stage supercharger on its massive 12-cylinder engine that made around 475 hp. Throughout 1939, the three and sometimes four W154s qualified 1-2-3 and took home numerous Grand Prix wins. Take the W154 around the Nürburgring in the rain – if it doesn’t give you a great respect for what the racers of the past accomplished, nothing will.

IMSA banned turbos following the 1994 season, so this 300ZX is the last of the series’ turbocharged racing Nissans. Steve Millen drove the #75 to victories throughout the 1994 season, less than a year after nearly losing his life in a wreck at Watkins Glen. Millen’s prowess behind the wheel combined with the incredible handling and power of the 300ZX made the duo a formidable weapon. Not much of the production 300ZX exists in this bespoke racecar, but the taillights, highly-modified heads and the block (cast in aluminum rather than iron) are there. After winning at the 24 Hours of Daytona, then later at Sebring, the Cunningham race team took the #75 and #76 to Le Mans where they won their class, but were unable to claim overall victory due to mechanical issues that were resolved in pit lane. Millen retired after the next season, following another near-fatal accident. He then meticulously rebuilt the #75 and races it these days at events like the Monterrey Historics.

The Swiss team Rebellion Racing has proven that a privateer can compete with the big factory teams. Over and above winning most of the races in the 2014 Le Mans Prototype (LMP) privateer class, Rebellion Racing showed up at the 24 Hours of Le Mans and took the #12 to a fourth overall finish. Prototype racing is the top level of sports car racing and when you race these cars for six to 24 hours, it puts them to the ultimate test. Again and again, the #12 and the Rebellion Racing team have proven they have what it takes to run with the best prototypes and racing teams in the world.

Dubbed the “Hondola” by motorsport press due to the collaboration between Honda and Lola’s Eric Broadley, this racing antiquity holds a unique place in motorsport history. The RA300 won its first ever Formula One race at the Italian Grand Prix in 1967 and did so in a curious manner. Driven by John Surtees, the RA300 performed soundly throughout the race and was holding third place. On the last lap, race leader Jim Clark ran out of fuel and sputtered to the sideline and second place Jack Braham ran wide letting Surtees get by. That lap led to the RA300’s only win and the only lap it would ever lead. Powering the car was a specially designed 48-valve V12 spitting out around 400 hp and capable of spinning the tires loose at 100 mph. The mark the RA300 made in racing history was brief, but its beauty is timeless.

Volvo may be most renowned for its safety and reliability, but the brand did more than dip its foot into the pool of motorsport. Race-prepped 122s, known as “Amazons” in their homeland of Sweden and sisterships to the 123GT in body, took home class wins in touring car races at the ‘Ring and Brands Hatch and first place in a score of the top rally championships of the era. The 123GT capitalized on that legacy and brought performance to the production model. While more than 5,000 models were planned, only around 1,500 were built. In the 123GT, you got a high-compression straight-four with dual SU carburetors delivering roughly 115 hp. To rein in the additional power, the 123GT came with front-disc brakes and a stiff suspension. Volvo didn’t scrimp on the accoutrements either; Recaro seats, fog and driving lights, a large tachometer and plenty of custom trim make the model standout.

One advantage this Cadillac XTS Limousine has is its length. You are not going to just fly by this vehicle. It’s long. When toting around VIPs, you need a limousine and that’s where this rig comes in. Plunk down in its luxurious interior and watch a movie while Jeeves puts in a few laps or use it as a canvas for an elongated livery. With 300 horsepower in the stock version (and don’t forget you can upgrade this thing with a NASCAR engine), it’s no slouch. If you want to practice your cornering skills, the Limo will give you a new perspective on watching out behind you. Simply put, this is one hulking and fancy piece of machinery that has no business on the track. All the more reason to have it in Forza Motorsport 6 we say.

Once you’ve checked out the car pack, visit ForzaMotorsport.net to learn more about the latest content update for Forza Motorsport 6, including some notable improvements to game features and corrections to a number of cars and tracks.