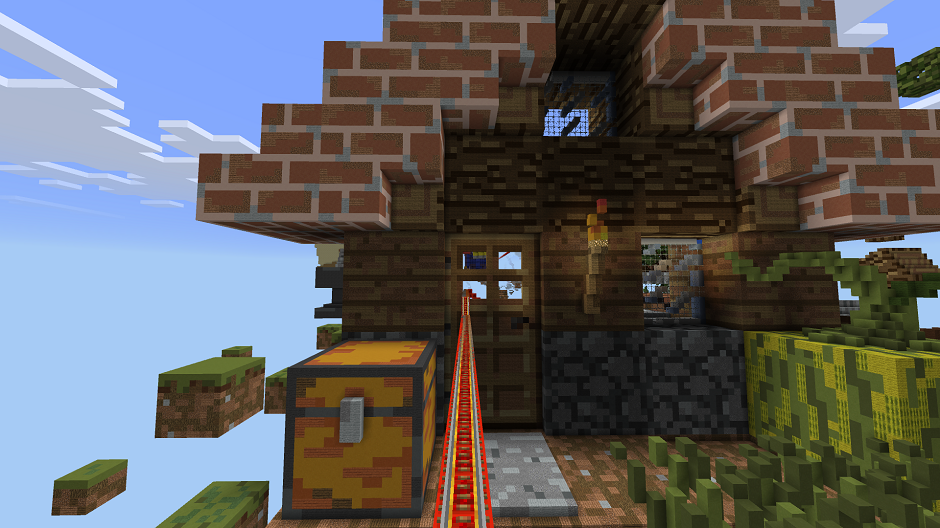 What a year it has been! This morning we celebrated the first anniversary of Minecraft: Windows 10 Edition Beta. Since the Windows 10 Edition released last July we have committed over 12,000 code check-ins and fixed over 6000 bugs. All that work has resulted in 15 updates with dozens of new features for you, with lots more to come.

Over the last year, zombie villagers got upgraded wardrobes, while rabbits got new coats and headed out to the desert and snow biomes. Our squid learned how to flee and our cauldrons learned how to dye armor. Somewhere along the way our baby zombies even learned how to ride chickens, (…um, watch out for that!) Acacia villages started popping up in your worlds and rumor has it that shears will even show you the true face of an unsuspecting snow golem.

While playing multiplayer with Pocket Edition, we have let you travel to the nether, sail around in new boats, and build things with the full range of redstone capabilities plus some new tweaks. We hope you are having fun taking advantage of the new block moving and observer block behavior in your redstone builds. New mobs abound with each release; horses and rabbits and ocelots, oh my! New DLC content has helped you become Biome Settlers, Redstone Specialists and make your villages look like cities with the recently released texture packs. Today we released a brand new Villains skin pack, and last month Realms made it easy for players on VR, Pocket Edition and Windows 10 to play together in persistent worlds which change and grow, even while you are away.

This is just the beginning. In the next few weeks, we are adding Oculus Rift support to the Windows 10 Edition Beta in a free update as our thank-you for your continued support over the past year. If you own Windows 10 Edition and an Oculus Rift, you can jump right in and experience Minecraft in a whole new way. And, if playing around with VR Minecraft sounds excellent to you and you haven’t upgraded your PC to Windows 10 yet, don’t worry- there’s still time. To upgrade to Windows 10 before the free offer ends July 29, visit Windows.com.

It’s been a fun year for us so far, and we hope you are having fun with us! To celebrate, we’re releasing this roller coaster map, available for free download at https://aka.ms/win10anniversary. Check it out in the video trailer above!  Thank you for playing.