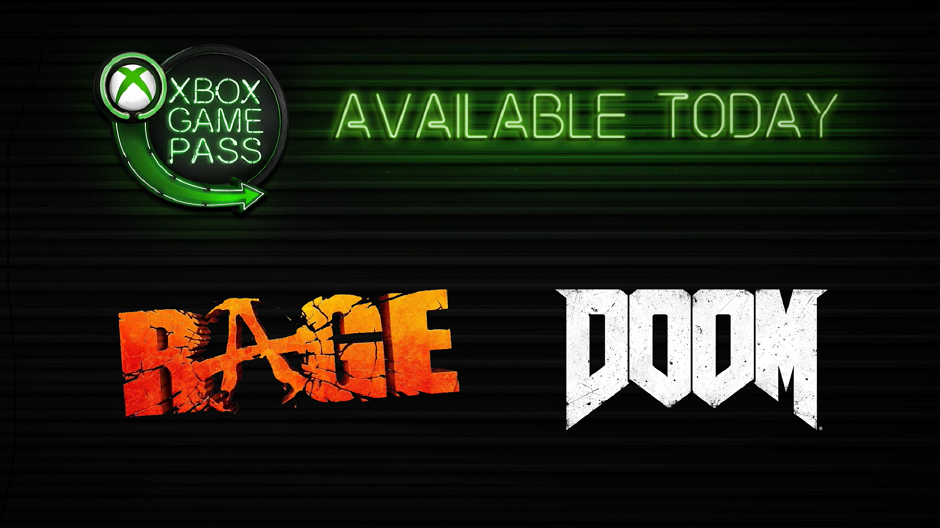 Xbox Game Pass members! It’s time to wake from hibernation and save the future with two incredible sci-fi shooters making their way to Xbox Game Pass today. Emerge from your underground shelter and enter a post-apocalyptic future in Rage, and wake from a centuries-old possessed sleep as the Doom Slayer to get a dose of demon-hunting action in the critically-acclaimed, fan-heralded first-person shooter Doom.

These two modern shooter classics join the more than 100 great games already included in your Xbox Game Pass membership. If you’ve yet to sign up for Xbox Game Pass, start a 14-day free trial today by clicking here. Now, let’s learn more about these games…

After a cataclysmic event nearly destroys the planet, you’ll emerge from cryosleep to a world long lost to law and order, to one that welcomes chaos and despair in id Software’s Rage. In this open-world shooter, you’ll venture out into this “new” world taking on quests, upgrading and driving your vehicle across desolate and foreboding landscapes, and engage in some epic gunplay that the celebrated game studio is so well known for. And with the pre-E3 announcement that Rage 2 is coming in the Spring of 2019, now’s the best time to return to its roots.

Today’s news is also a very special time for id Software as well, as the original Rage was always considered a passion project for the team; especially for Tim Willits, studio head of id Software. They’re incredibly excited that a new generation of gamers will have a chance to experience one of their favorite creations, available now on Xbox Game Pass for members to enjoy – and for those who’ve played it before, a little refresher of Rage wouldn’t hurt.

The granddaddy of shooters returns with guns blazing and demon killing on its mind. In 2016, id Software re-defined the word “reboot” with Doom, putting us back in the boots of one of gaming’s most iconic heroes: The Doom Slayer.

After being unearthed from a mysterious crypt on the planet Mars, you’ll quickly get back to work slaying hellish demons, wielding incredibly destructive weapons, and executing brutal melee attacks as you work to keep the invasion from Hell at bay – and uncover what sinister secrets the Union Aerospace Corporation (UAV) has locked away.

And once you’re done demon slaying, hop online to engage in some classic multiplayer matches, or build your own competitive maps to share with the larger Doom community thanks to the innovative SnapMap tool.

With over 100 great games available for one low monthly price, including highly-anticipated new Xbox One exclusives the day they’re released, plus more games added all the time, Xbox Game Pass gives you the ultimate freedom to play. If you haven’t tried Xbox Game Pass yet, you can start your 14-day free trial today by clicking here.