With gamescom and IFA now behind us, we’re taking a look at some of the hottest Windows gaming hardware announcements across various events—bringing them all into one, easy place for you to read. The last few weeks have seen a handful of new gaming laptops, GPUs, monitors and more announced for PC gamers of all varieties. Check out the list below to see what new hardware announced you’re most looking forward to! 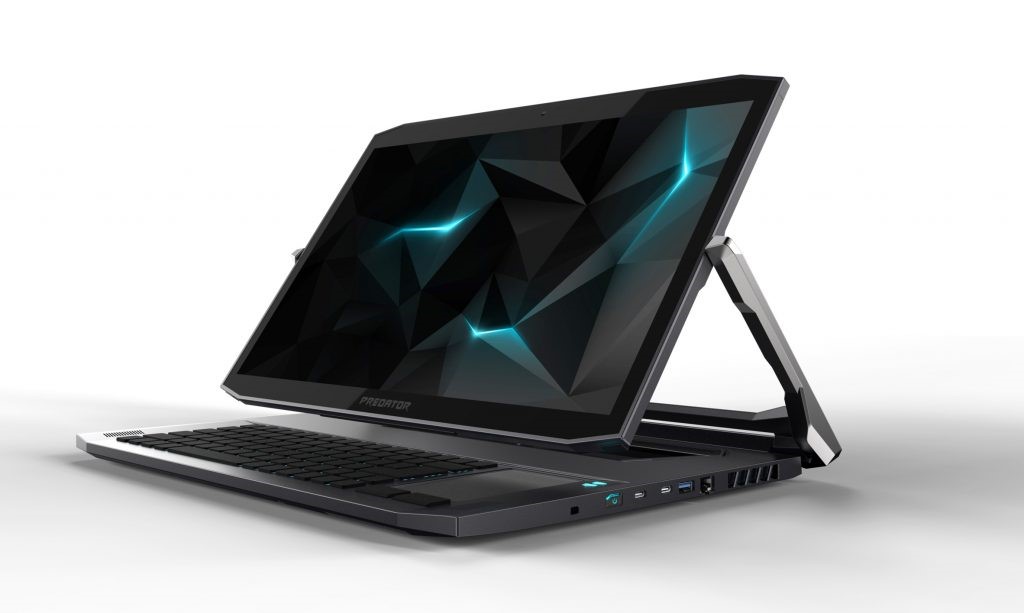 The newly refreshed Acer Predator Triton 900 gaming rig sports the latest 8th Generation Intel Core i7 processor for ultimate power and speed, while the laptop’s hinge pivots the screen to fit whatever angle you’d like to game at. With the garage door, you can insert an Xbox controller dongle to play Xbox games seamlessly, and a custom-engineered dual-fan keeps things cool while the RGB backlit keyboard and overclocking capabilities customize your gaming experience. A testament to Lenovo engineering and innovation, the Lenovo Legion Y530 15.6-inch FHD display gaming laptop is thermally optimized to run cooler and quieter with a full-sized white backlit keyboard. At 24 mm thin and 2.3 kg light, it’s been redesigned to deliver the ideal balance between epic gaming performance and practical portability. It also comes with powerful NVIDIA graphics, DDR4 memory and more, all optimally cooled via a re-engineered dual-channel cooling system.

The Lenovo Legion T730 is a 28-liter desktop that gives you the style and power you demand in a gaming tower, thanks to customizable RGB LED system lighting, a transparent side panel, optional liquid cooling, and extreme processing and graphics power with overclocking options to completely immerse you in your favorite titles. The space-saving Lenovo Legion C730 is a striking 19L cube with fully loaded overclocked components – boosted by the GeForce RTX 2070 and RTX 2080 GPU upgrades. Looking for a notebook to enable you to keep gaming-on-the-go, but capturing the appeal of your inner creator? Look no further. The P65’s high-performance specifications are comparable to MSI’s top-of-the-line gaming offerings. It features Intel’s latest 8th Generation Core i7 processor and up to an NVIDIA GeForce GTX 1070 Max-Q GPU, allowing for fast rendering times and multitasking. The P65 has up to almost three times more graphical performance than leading competitor in its category. And it uses MSI’s Cooler Boost Trinity, the same system found in the company’s gaming laptops, to keep the notebook cool even during intense workloads.

With its ultra-light aluminum chassis, the P65 weighs just 4.14 pounds and measures 0.69 inches thick. At the same time, the slim design does not sacrifice battery life. The P65 has an 82Whr battery for up to more than 9 hours of regular use.

At launch, the P65 will be available in both silver and a limited-edition white. The White Limited Edition shares many of the same specifications as the Silver Edition but comes with an NVIDIA GeForce GTX 1070 Max-Q GPU, Hi-Res Audio, and Thunderbolt 3. At launch, the Silver Edition will be available with either an NVIDIA GeForce GTX 1060 Max-Q or GTX 1050 Ti. The White Limited Edition also includes an extended one-year warranty and protective laptop sleeve.

At gamescom in Cologne, Germany, OMEN by HP unveiled new hardware and mobile software innovations for gaming enthusiasts. The OMEN Obelisk is the latest addition to the company’s desktop gaming family. Also announced are new features for the OMEN Mindframe Headset – the world’s first headset with active earcup cooling technology – to add comfort and audio benefits for both competitive play and streaming.

Gamers are always hungry for more power—such as graphics cards and memory. The OMEN Obelisk will be one of the first systems to carry the NVIDIA GeForce RTX 20 Series of GPUs by way of the NVIDIA GeForce RTX 2080, powered by all-new NVIDIA Turing architecture, giving gamers access to the world’s ultimate gaming architecture. The integration of HyperX high-performance memory within the OMEN Obelisk is another critical part of engineering a desktop to utilize the latest GPUs, RAM and other components through an industry-standard upgrade path vital to gaming at the highest levels, both now and in the future. The OMEN Obelisk Desktop addition to the family of OMEN Desktops has been engineered with peak performance and customization so PCs can keep up with the latest in gaming. With a DIY-friendly, industry-standard upgrade path, along with options for the latest graphics and processor architectures, gamers can continually achieve the performance they expect.

Top features of the OMEN Obelisk are detailed in HP’s press release and include world-class power and storage, latest series of NVIDIA GPUs, HyperX integration, strategic cooling with extensive venting that takes advantage of thoughtfully placed components to generate optimal airflow, and a customizable and clean design.

Speaking of top features, the forthcoming OMEN Mindframe Headset is the world’s first headset with active earcup cooling by way of HP’s patented thermoelectric driven Frostcap technology. It has been built with comfort in mind, while also delivering top-notch sound quality. The OMEN by HP team has made further additions prior to launch, including noise cancellation, real-time audible feedback via sidetone to take advantage of noise cancellation, and new fabric cups for improved breathability.

Builders can choose from a variety of RGB accessories to express their creativity and build the perfect lighting for their gaming PC. All HUE 2 accessories require a HUE 2 RGB controller, purchased separately in one of the HUE 2 kits. The new HUE 2 family of products will be available in North America in mid to late August, and in the rest of the world in late August. Read more here. The new Alienware Aurora gaming desktop, designed for VR experiences, and currently the designated training PC for Team Liquid, is both a proven powerhouse for gaming professionals as well as a complete package for gaming beginners and veterans who need significant performance and upgradability under a reliable, high-quality chassis.

For gamers looking for a mid-tower desktop, the new Alienware Aurora is ready for current Oculus VR or HTC/VIVE requirements and can also support higher performance configurations for the near future’s more demanding VR, as well as 4K gaming. Gamers can choose from a wide variety of upgradability options, spanning many performance and budgetary considerations.

Inspired by the Alienware Area-51, the external design of the system includes AlienFX customizable lighting and has incorporated various ergonomic features for user-handling and component access. Its internal arrangement and fan positioning delivers ambient air towards the priority components with exhausts at the top and rear of the system to deliver maximum performance. With up to 8th Gen Intel Core i9 k-Series processors, the Alienware 15 and 17 are engineered with an improved thermal solution and a thin, hinge-forward design to extract the maximum performance from top-of-the-line components.

The design introduces premium materials such as anodized aluminum, magnesium alloy, steel-reinforcements and copper thermal management to ensure a level of stiffness, rigidity, thinness and high-quality feel – all without sacrificing gaming performance. You can also get to internal components easier through a new bottom door mechanism.

With an upgraded Alienware TactX keyboard, with per key RBG LED, Alienware 15 and 17 now support n-key rollover, enabling more than 108-key commands for maximum actions per minute. It’s the only keyboard on a laptop with 2.2mm of key travel, allowing for rapid response for any keystroke. Reinforced with a steel back plate for rigidity and uniform feedback, it’s guaranteed to stay functional for up to 10 million keystrokes.

These monitors support AMD FreeSync for smooth gameplay and give you the flexibility to game with the No-Sync fast refresh option on your existing hardware. You can also personalize and preset up to three gaming profiles, in addition to three factory preset modes, with a gamer-geared menu. Both monitors are distinguished by metallic paint in recon-blue to complement Dell gaming PCs for unified look and gaming experience.

The all-new gaming monitors provide maximum reliability with Dell Premium Panel Exchange, which allows a free panel replacement during the Limited Hardware Warranty period even if only one bright pixel is found.