If you’re a fan of Disney, Final Fantasy, or RPGs, get ready – we have a lot of very exciting news to share. Like… a lot. During the Microsoft X019 event in London, we announced that the full Kingdom Hearts saga is making its way to Xbox One in 2020!

It’s something we know Xbox owners have been asking for, so we’re happy to announce that two compilations of games will be available: Kingdom Hearts 1.5 + 2.5 ReMix and Kingdom Hearts HD 2.8 Final Chapter Prologue.

But that’s not all. We’ve also released a demo for the most recent game in the series – Kingdom Hearts III – for Xbox One. It’s available on the Microsoft Store from today – and you can download it now!

The final bit of news is that the digital version of Kingdom Hearts III is currently 67% off on the Microsoft Store – so if you like what you play in the demo, it’s an ideal time to upgrade to the full game.

It’s possible that some of you may be yet to experience the Kingdom Hearts series. Perhaps you’re wondering what all the fuss is about.

Well, imagine if you could team up with Aladdin, Donald Duck, and Goofy to save Agrabah from the evil Jafar. Or sail the seas with Jack Sparrow – sorry Captain Jack Sparrow – on the hunt for pirate treasure.

Or battle shadowy threats while Merlin from “The Sword in the Stone”rubs shoulders with Squall Leonhart from Final Fantasy VIII Remastered.

The series has already made an appearance on Xbox One with Kingdom Hearts III (reminder: demo now available), and with the release of the two new compilations, Xbox One players can experience where it all began.

As for what’s in the compilations…

This compilation lets you play through the earliest games in the series, fully remastered with improved HD visuals, controls, and music. Here’s what’s included:

Along with his friends Donald and Goofy, Sora travels across Disney worlds, encounters beloved icons like Simba, Aladdin and Belle, and battles the Heartless – shadowy creatures born from the darkness in people’s hearts.

This pack also contains the excellent Kingdom Hearts Birth by Sleep. It takes place years before Sora’s adventures, puts you in control of three Keyblade wielders – Terra, Ventus, and Aqua, and shines a light on the series main villain Xehanort (fun fact – voiced by the late, great Leonard Nimoy here).

It contains the following:

Kingdom Hearts Dream Drop Distance HD focuses on Sora and his friend Riku, as they attempt to improve their skills through an exam known as the Mark of Mastery. Spoilers: it doesn’t go to plan.

Finally, “Kingdom Hearts Back Cover” is a feature length movie that reveals some fascinating secrets about the fabled Keyblade Masters.

All that’s coming to Xbox in 2020, but if you want to give the series a try right now, a demo of Kingdom Hearts III is now available to download onto your Xbox One. It contains segments from two of the game’s worlds: Olympus and Toy Box.

In Olympus, Sora, Donald, and Goofy meet up with Hercules and help him handle an attack by Hades that threatens the gods themselves. One particularly cool thing is that any progress you make in this section of the demo carries over to the main game!

The second world in the demo is based on “Toy Story,” and introduces Sora to Woody and Buzz. Not only can you explore Andy’s Room – meticulously recreated from the movies – you’ll also visit entertainment superstore Galaxy Toys.

And, as mentioned, if you like what you play, you can also pick up the digital version of Kingdom Hearts III from the Microsoft Store at a massive limited-time discount of 67% off the standard price.

We’ll have more news about Kingdom Hearts on Xbox One in the coming months, so make sure you follow @KingdomHearts on social media and stay tuned here to Xbox Wire to get all the announcements. 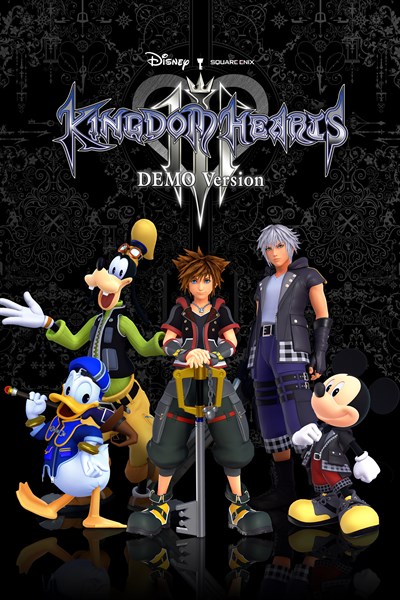 ☆☆☆☆☆ 54
★★★★★
Get it now
The demo of the latest entry in the KINGDOM HEARTS series. Having learned that all their struggles thus far were engineered by Master Xehanort in his plot to start another Keyblade War, Sora and his friends continue their search for seven guardians of light capable of standing against the coming darkness. King Mickey and Riku seek out Keyblade veterans from the past, while Sora, Donald, and Goofy begin a new odyssey across Disney worlds to claim the "power of waking." Wiser from his many adventures, Sora is about to face his greatest challenge yet. For the first time in KINGDOM HEARTS III, Sora will travel across Pixar and other exciting new Disney worlds that lend the story a grander scale than ever before seen in the series. The battle system reaches new heights as well with thrilling action, rideable theme park attractions, and spectacular team-up moves with Disney's beloved characters. KINGDOM HEARTS inspires and entertains unlike anything else out there. Don't miss this brand new installment. (The demo contains two stories: one from the game's opening sequence to the introduction of Olympus, and one that covers the first half of the Toy Box adventure. The save data of the former can be transferred to the full version of the game.)