You kick back and relax with a cup of tea. Your hospital’s looking pretty sharp: you’ve got a reception desk, you’ve built a doctor’s office… things are running rather well.

But no more than two sips into your overly milky beverage, you realize that this isn’t exactly a normal hospital. The cup slips from your hand, tumbling inexorably towards your new carpet. Your mouth, agape. A patient suffering from Cubism has just walked in looking like a Picasso painting.

This, my friends and new acquaintances, is Two Point Hospital. An unusual healthcare sim to say the least; one that’s been loved by critics and players alike and is now heading straight to your couch –it’s coming to Xbox One February 25.

That’s why we’re pleased to say we’ve also designed a great control scheme that makes it even quicker and easier to build and manage your hospital. Jump into build menus in milliseconds. Handle staff hiring and finances with just a couple of button presses. We’ve got you covered.

The camera system has also been reworked to handle twin-sticks, meaning you’ll be gliding your virtual eyes around the hospital with simplicity and ease.

Manage Your Very Own Hospital

Two Point Hospital is a game where you build and manage all aspects of a healthcare institution. You’ll build rooms, place objects and decorate your hospitals with a variety of lovely items and then fling open the doors to cure some very wild illnesses.

But this isn’t your standard doctors-and-nurses fare. You’ll be dealing with the likes of Light-headedness (patients with giant lightbulbs for heads), Premature Mummification (your patients are wrapped in bandages) and hundreds of other unusual ailments.

To cure these patients, you’ll need to feed them into a variety of “cure machines”, highly-specialized and finely calibrated pieces of equipment. To cure Cubism, for example, your doctors will supervise the shaking apart of their individual cubes into a funnel, watch your patient be pumped into a new skin and finally baked in a small chamber before being released afresh with a comical ping.

You’ll also need to keep an eye on your finances. Splurge the cash, and you might have to take out a loan to cover your bills. But hire, train and promote the right staff, scale your hospital in the right way and keep an eye on the prices of your cures (and snack machines) and you might find yourself in charge of a fine, award-winning healthcare empire expanding across Two Point County.

And what a place Two Point County is! Imagine the whole world in a single place. Hot and humid jungles, the cold north, an industrial megatropolis: it’s all here. With each region, you’ll find yourself dealing with new challenges and new region-specific diseases, meaning your playthrough will unfold in interesting ways!

As Two Point Hospital is a management sim, anything can happen in your hospitals, too! One particularly fraught incident, captured for life on our studio livestreams, involved a health inspector coming to visit. After a wonderful tour of the facilities, he approached one of our corridors only for us to realize that a patient had gone to the toilet… uh… outside of the toilet.

The sausage-like crime was in clear view, and in only seconds he’d clap eyes on it himself. We did the only thing we could. We urgently hired a janitor and gave him one job and one job only – deal with the lumpy misdemeanor in corridor 3.

Sadly, he slipped in the deed just as the health inspector rounded the corner. We’d been caught in the act, and our hospital prestige suffered as a result. But you can’t say we didn’t try.

If you’d like to get your hands on Two Point Hospital, you’ll be able to enjoy it for yourself on February 25, 2020. You can pre-order Two Point Hospital digitally on the Microsoft Store, with two expansions included at launch! Or you can play on console with your Xbox Game Pass membership on the same day as the global release.

With that, we’ll leave you to fix the tea stain on your carpet. Just remember: it could be worse! 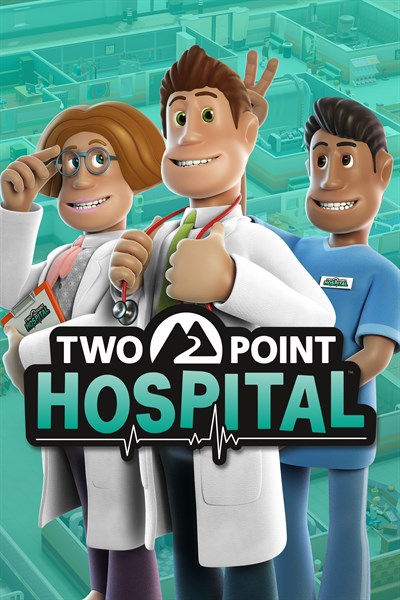 ☆☆☆☆☆ 165
★★★★★
Get it now
Xbox One X Enhanced
Xbox Game Pass
*FREE UPDATE ALERT! Here it is! Sandbox: Freeplay mode is OUT NOW* BUILD, CURE and IMPROVE! Design stunning hospitals, decorate them as you like, cure very unusual illnesses and manage troublesome staff as you spread your budding healthcare organization across Two Point County. Two Point Hospital includes two DLC – "Bigfoot" and "Pebberley Island." Design and build your own hospital Build up a hospital from nothing to a masterpiece as you design the most beautiful – or functional – healthcare operation in the whole of Two Point County. Cure unusual illnesses Don’t expect Two Point County to be populated with your usual types of patients. In this world, you’ll experience Two Point's trademark quirky illnesses; from Light-headedness to Cubism – each requiring their very own special type of treatment machine. The County's the limit Your first hospital is where it begins, but what next?