As I was resurrected back at the starship Javelin thanks to the Bio-Replication Chamber, I made a quick mental note about the Giant Bombegranate plant: “Explodes when kicked.”

This trial and error approach to exploration in the upcoming Journey to the Savage Planet, launching January 28 on Xbox One, is comical and not-quite-as frustrating as I’d expect thanks to the inherent entertainment that comes with a “What happens if I touch…” or “Is this cliff too high to jump off?” methodology of charting an alien world. Not to mention the comedic violence that occurs when I was encouraged to follow the game’s chaotic rule of space exploration: shoot first, analyze later.

Planet AR-Y 26, where I have mysteriously crash landed, is like one giant puzzle for the player to solve. As an astronaut for Kindred Aerospace, which touts itself as the fourth-best interstellar exploration company, it’s up to me to catalog and explore every inch of this strange, new planet to determine its suitability for future colonization. And everything I need to survive on this hostile world can be obtained by scanning, shooting, and collecting the native fauna and flora.

Low on health? I can equip the trusty Nomad Pistol and shoot a Vitality Plant to have it spew yellow jellybean-like capsules to refill health. Need to upgrade equipment? I’ll just shoot creatures like the owl-like Valley Pufferbird to collect such vital elements as aluminum, carbon, or plasma. Through investigative scanning (and shooting) I soon learned which creatures drop the resources I needed to help me on my journey.

Then it was a matter of returning to the Javelin to use the onboard 3D printer to craft upgrades that can do everything from improve the damage of my pistol to construct a Proton Tether (grappling hook) that let me traverse previously unreachable areas by latching onto the perfectly named Grapple Flowers.

As I explored more of the world, I discovered portals that permitted me to fast travel across various areas of the planet. Which was incredibly helpful, as I’d found there was a lot of backtracking to the Javelin in the early going to craft upgrades and deposit resources. And should I die on my adventure, I was resurrected (sorry, bio-replicated) back at the Javelin with the opportunity to go back and uncover my loot. Pro tip: You get some bonus resources should you find and bury your old body.

Accompanying me on this journey was an artificial intelligence named E.K.O., a sarcastic and wise-cracking companion that helped plot waypoints of interest and narrated my adventure; your astronaut has a non-speaking role outside of a few grunts and mumbles. This narration really came into play very early on, as I discovered some alien-made structures, indicating that another species lived (lives?) on this planet. Only by exploring more of the planet and uncovering other alien-made structures could I determine their fate, something the company overlords at Kindred Aerospace are very, very interested in knowing more about.

Part of the lore-building of Journey to the Savage Planet includes a series of tape-recorded commercials that play on heavy rotation onboard the Javelin which channel the best parts of absurdist shows like “Tim and Eric Awesome Show, Great Job!” and “I Think You Should Leave”. Some of these cover Kindred’s other endeavors, from the GROB (food paste in a can!) that doubles as bait for the alien creatures, to Brain Wipes that are available in a variety of styles, including apathetic, happy, or sociopathic. It’s all quite weird, but I dig it. This is clearly a very bizarre, hyper-capitalist company you’re working for and the feeling I get is that they’ve spread themselves too thin. So being able to lay claim to the discovery of an alien civilization would do wonders to their bottom line. Maybe even bump them up to third-best interstellar exploration company! Time will tell.

There’s still plenty more for me to explore and discover across this savage planet, along with solving the unfolding mystery of not only Kindred’s intent but the status of the alien life that appears to have abandoned this place a long, long time ago. I can feel the metaphorical hooks digging in to keep playing Journey to the Savage Planet, which is already shaping up to be one of 2020’s early surprises. Keep your eyes on this one, or play it when it releases next week on Xbox One. 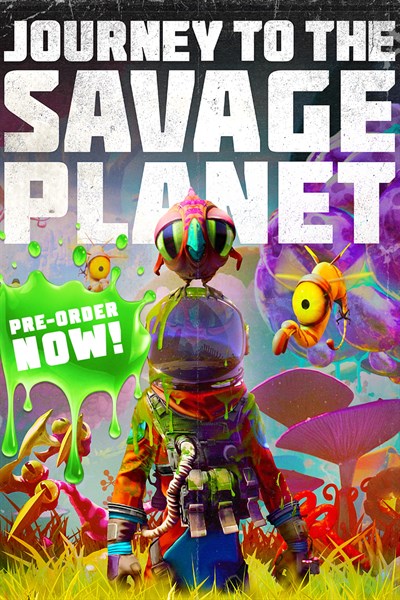 ☆☆☆☆☆ 16
★★★★★
Get it now
Pre-order Journey to the Savage Planet now to receive: – Martin Tweed Bobblehead (Corporate Gift) – the perfect complement to your Javelin habitat, programmed with a variety of motivational quotes and phrases to turn that frown upside down. – Kindred Aerospace Pistol Charm (Corporate Gift) – gives players an increased chance of better loot drops while equipped. Not to mention, a celebration of its prestigious designation as the 4th Best Interstellar Exploration company! Welcome to the Pioneer Program! In this upbeat & colorful, co-op adventure game you play as the newest recruit to Kindred Aerospace. Dropped onto an uncharted planet with little equipment and no real plan, you must explore, catalog alien flora and fauna and determine if this planet is fit for human habitation. But perhaps you are not the first to set foot here… Onward to adventure! Good luck – and mind the goo!