Hi! My name’s Dmitry. I’m one of the Quest Hunter developers. My little daughter came up to me while I was testing a new chapter of the game and asked: “What kind of witch is that?” or “Daddy, who’s this knight?” and I start reading the dialogues between the game characters to her as if it was a book. And after the dialogues, she asks me to find the treasure and break a couple of trees. That was about a year ago when Quest Hunter was going from early access to release on PC.

Today my daughter’s sitting next to me, gamepad in her hands, and we’re clearing out the dungeon together. She still can’t read and I’m in charge of the dialogues, but she tends to be better in commanding the battle. Apparently, we make a good party on Xbox.

Quest Hunter is really a game for everyone. We set a low entry threshold for players of a young age, and at the same time, we involve advanced gamers. If you like RPGs and are looking for a new experience with your kids, this game is for you!

If you’re afraid of windows with a bunch of parameters and characteristics and if you have no idea how to approach tons of dialogues and characters – this game is for you! Quest Hunter is a perfect entry point to a wonderful genre of role-playing games.

And advanced players will certainly appreciate things like influence on the game’s plot in dialogues, the light humor, random generated dungeons, co-op story mode, cross-platform play, and of course hunting for treasure. I’m very proud that Quest Hunter arrives on Xbox One today! 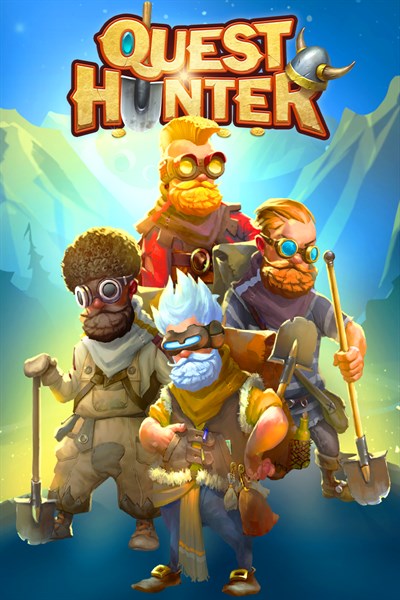 ☆☆☆☆☆ 26
★★★★★
$29.99
Get it now
Xbox One X Enhanced
Quest Hunter is an isometric action-RPG where your choice drives the story. Find tons of treasures and secrets, solve puzzles, equip your character, level up your skills and finish off enemy bosses. Play on the couch, alone or with friends, or make it an online party for up to four players! Basic Features + Story-driven RPG: influence the storyline, choosing the answers in the dialogues. Untangle the insidious plans of your enemies and bring them out into the open. Save the world from the eternal darkness! + Cooperative mode: play the game online with your friends, or on couch on one screen (Up to 4 players). Fight against evil shoulder to shoulder or make a mass grave in the enemy’s lair! + Random generated dungeons: try your luck, see if you can find the way out of the dungeon. Where could it be this time? Who’s waiting for you around the corner? + Quests and puzzles: move, turn, light, switch over, dig up… In short, solve a variety of quests and puzzles. Search for treasure maps to become the richest man in the camp! + Skills and super powers: upgrade the character attributes and explore new skills. Become an invincible killing machine and turn your enemies into dust! + Weapons, armors and items: find, create and upgrade your weapon and armor. Cook potions or make bombs. Take a shovel and a straw hat or a sharp blade and a helmet – it’s up to you to decide! + Monsters and bosses: mysterious beasts from the darkness – light the torch and they will scatter away. Insidious bandits – give them your money and you’ll stay alive. Cunning bosses – find your approach to them! + Treasure and trophies: stuff your pockets with trophies of your defeated enemies. Find all stashes and hiding places. Dig up all the treasures of the Dark World! + Cross-play in co-op mode is available for all platforms! And remember: you are safe only by the light of the torch!