Fury Unleashed, the roguelite run and gun taking place inside comic books, is now available for Xbox One. On that occasion, I wanted introduce the game’s unique combo system to you. Fury, the titular hero of the story that players take control of, can take a form of anything from a human to beings straight from both fantasy and science-fiction settings. But the looks don’t matter here, as each one of hero’s incarnation is capable of the same thing; obliterating anything that stands in his, hers, or its way, thanks largely to an ability to build a combo, that grants different gameplay-related boons.

Awesome Games Studio’s latest title was always planned, to be a game, that tries its best to convey the feeling of being an action hero of an over-the-top comic book series. To achieve this goal, different means were taken over the span of the game’s production. From making sure the controls are responsive, and the gunplay feels powerful, to securing a hardcore accompaniment soundtrack from the industry’s veterans. None of those would make the feeling complete though, without a well-crafted incentive for the player to play fast, aggressive, and brave. That is where the game’s combo system comes into the spotlight.

What is a combo? A mysterious little bag of secrets? There is nothing cryptic about the term; it is simply a number, which conveys, how many set things were made repeatedly within a certain time span. Sometimes, it also refers to a combination of moves used by a fighting game character. Usually, players are used to combo counters being a simple addition, that doesn’t change much in terms of gameplay, but grants some bonus score or helps a bit in completing certain tasks.

Fury’s combo meter isn’t just a bonus meter, it’s a means to both survive and obliterate anything that stands in the players’ way. In Fury Unleashed, combo relates to how many enemies were defeated close to each other. That means, that kills made build up a number, which has to be sustained by further take-outs, which in case of this game, could seemingly have no end. The clock’s ticking though, and if the combo is not sustained for some time, it stops, returning the number, no matter how big it was, back to zero. Still, there is no need to worry, as the game offers different ways for it not to happen.

First of all, generating the combo grants players different bonuses, both offensively and defensively. The current combo might be broken by taking damage, but by advancing in the skill-tree, the hero gains an ability to directly convert combo points into shields, that fully blocks the incoming damage, as well as protects players’ point streak. Other combo perks include things like increased weapon reload speed, or higher drop chance of healing orbs. There is also an in-game currency drop multiplier tied to the combo meter, making so even if the player fails the current run, the reward will be worth the mayhem caused.

Because of how this system is built, I believe the game to be a roguelite, that successfully promotes the more aggressive playstyle, instead of encouraging more careful play, which this genre is known of. All the enemies and bosses in the game have patterns, that ensure the player won’t receive an unfair hit, so with enough time and practice, it is fully possible to complete the game from start to finish on a single combo! But, that won’t be easy. Usually, at the start, gaining a combo of 20 might be seen as a challenge. With some time spend, it might look like 50 is a default number, and with enough persistence and skill, players will be able to hunt the toughest achievements, like scoring a combo of 500. As the game has just launched for Xbox One, I hope that I’ve encouraged you to give it a shot! 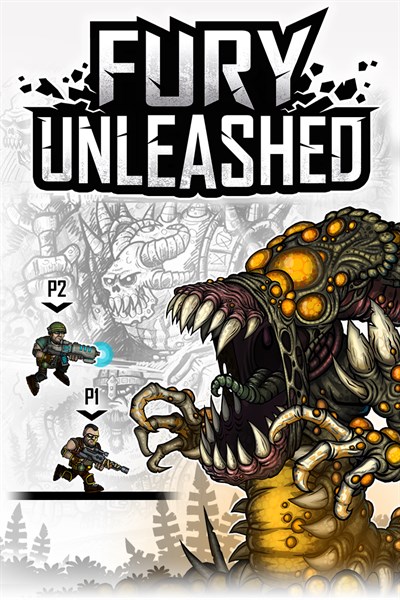 ☆☆☆☆☆ 67
★★★★★
$19.99
Get it now
Xbox One X Enhanced
Fury Unleashed is a combo-driven rougelite action platformer – each kill you make increases your combo. Hit certain thresholds and your damage resistance and healing powers will kick in! It's a game you can even beat in one ultimate combo. Are you up to the task? ABOUT FURY UNLEASHED Fury Unleashed was created by combining inspiration from modern roguelite platformers, like Dead Cells and Rogue Legacy, with nostalgic memories of old-school platformers, like Contra and Metal Slug. We have spent five years polishing our creation to make sure that your experience with the game will be as memorable as the aforementioned titles and we wholeheartedly believe that you won't be disappointed. MAIN FEATURES • Ever-changing comic book – Explore the pages of a living comic book where ink is your most valuable resource and each room is a comic panel. Find out why is John Kowalsky, creator of acclaimed Fury Unleashed series, having a creativity crisis and see if you can help him deal with it. • Gameplay-impacting combo system – Kill enemies quickly enough to unleash your fury and rip through everything in your way without getting injured. Learn to play flawlessly and beat the entire game in one, epic combo! • Game customization options – Choose either challenging Hard mode, which will put your skills to the test – or Easy mode, where you can adjust the difficulty parameters any way you want. Beat the Hard mode to unlock access to even harder Incredible and Legendary modes. Disable blood and gore if you don't like it, or if there are young children around. Go solo or bring in a friend for a local co-op session. • Choose your hero's skills to match your playstyle and modify their appearance to your liking! • Roguelite with soft permadeath – Discover worlds created by a mix of hand-designed levels and procedural generation algorithms. Choose the best items to assist you in your playthrough and unlock permanent upgrades when you'll die for your subsequent runs. • Ravishing environments – Play through the pages of visually distinctive comic books and dive into the creator's sketchbook. Master each enemy's behavior patterns and overcome a total of 40 bosses. All that accompanied by epic soundtrack composed by Adam Skorupa and Krzysztof Wierzynkiewicz, the creators of music for The Witcher, Bulletstorm and Shadow Warrior.