Greetings everyone! I am super excited to let you know that our award-winning old-school first-person shooter, Ion Fury, is now available on Xbox One! Ion Fury is a true successor to classic shooters such as Duke Nukem 3D, Shadow Warrior, and Blood. It brings all the beloved features of the ‘90s shooters fused with modern touches such as headshots, locational damage, modern physics, widescreen, and controller support.

After its successful launch on PC last Summer, and many content updates, new features, polishing, fixes, and awards that followed, it’s now time to bring all the fast-paced fun to Xbox One! And our excitement is through the roof, since Ion Fury is the first game ever, developed on the classic “Build Engine” (known from many ‘90s shooters such as Duke Nukem 3D, Blood, and Shadow Warrior), to be released on Xbox One.

A cyber-cultist army led by Doctor Jadus Heskel marches on Neo D.C., seizing the city with violence and terrorism. Follow corporal Shelly “Bombshell” Harrison, leader of the Global Defense Force, on her quest to bring down the deranged Dr. Heskel and put a stop to the havoc that he and his minions have created.

Sprint through a cyberpunk city filled with gigantic explosions, numerous secrets and hidden areas, and eradicate everyone and everything in your way. Wield her ever-faithful 18-round triple-barreled revolver, Loverboy, and duck and weave through the streets. Paint the city red with dual fire-spitting Penetrator submachine guns, perform fancy trick shots with Bowling Bombs, wreak havoc with the all-powerful Ion Bow, or level the block with Clusterpucks.

Ion Fury promises a frenzy action packed old-school experience that will constantly keep you on your toes. Get the game now on Xbox One and start blasting like it’s 1996! 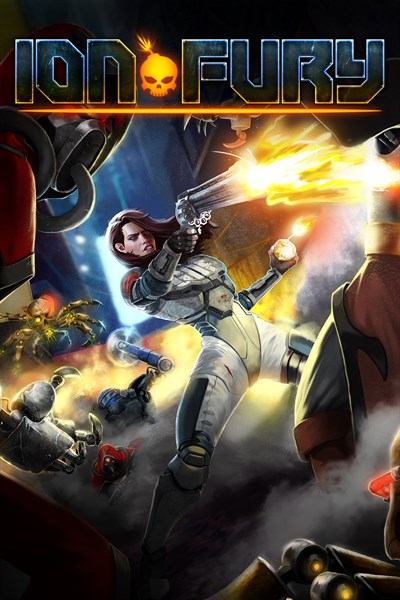 ☆☆☆☆☆ 120
★★★★★
$24.99
Get it now
Xbox One X Enhanced
Shelly “Bombshell” Harrison takes on a quest to slay evil transhumanist mastermind Dr. Jadus Heskel in the streets of Neo DC. She leaves a trail of carnage throughout huge, multi-path levels filled with gigantic explosions, more secret areas than we can count, and inhuman foes behind every corner. There’s no regenerating health here; stop taking cover and start running and gunning. Shelly’s crusade to take down Heskel’s army will see her leave destruction in her wake with a wide arsenal of weapons, complete with alternate fire modes and different ammo types. Ion Fury laughs at the idea of mandatory checkpoints and straight paths through shooting galleries. But, just because this is a true old-school first-person shooter doesn’t mean we've ignored all the good new stuff the last two decades have brought. Headshots? Hell yeah. More physics and interactivity? You betcha. 3DRealms, Voidpoint and 1C Entertainment have taken the best of both worlds and cooked it all into a bloody stew. Features: • The true successor to classic shooters such as Duke Nukem 3D, Shadow Warrior, and Blood. • Experience the original BUILD engine on steroids, pumped up and ready to rock again after 20 years! • Duck, jump, climb, swim, and blast your way through 7 exciting zones packed with multiple levels of mayhem! • A beautiful game world assembled from thousands of hand-crafted textures and sprites • An awe-inspiring arsenal of devastating weapons, including multiple ammo types and alternate fire modes. Tri-barreled revolvers, grenade launchers, and heat-seeking smart bombs are your best friends! • The classic '90s FPS action you love, meshed with modern inventions like locational damage and seamless level transitions • ZERO PROCEDURAL GENERATION. All levels are hand made and full of multiple paths, cool effects, and complex set pieces! • Thumping soundtrack comprised of true tracked module music, in authentic FastTracker 2 format