My name is Jakub Cisło and I’m the developer behind Project Warlock – a fast-paced, retro shooter inspired by cult-classics such as the original Doom, Hexen, Heretic, or Blood. I’m super excited to let you know that my game is releasing on Xbox One on 12th of June and today I wanted to share a few interesting bits of trivia from behind the scenes and the story of bringing my passion project to life.

I started the project when I was still in high school

I started working on Project Warlock (back then called Exitium 3D) when I was just 17. If you’re thinking I must have been pretty inexperienced then, you’re absolutely right. I had a good idea of the direction I wanted to take the game in, but I lacked the knowledge and skills to make it all happen straight away. And so, on my way to becoming a full-fledged game developer there were tons of hiccups, learning on my own mistakes, and uncountable hours of on-line tutorials. All of this in the midst of high-school chaos, exams, and college applications. It’s safe to say that it was a pretty wild time to work on a game.

Project Warlock probably wouldn’t have existed if not for my dad. He himself a gamer, grew up watching the fascinating evolution of video games, he instilled that passion in me very early on. When I was a kid, he introduced me to all sorts of games, but one type grasped my attention the most – shooters. Classical, retro, pixelated, 2.5D shooters, to be precise. I watched intently over his shoulder as he played Doom, Hexen, Blood, or Heretic and I instantly fell in love with the fast-paced action, dungeons, monsters and guns. When I later played the games myself I knew that I wanted to recreate those feelings in a new, distilled form for other players worldwide.

That’s right. When the game was still in its early stages, I realized that I cannot move much further without securing sufficient funding to buy the necessary tools to create Project Warlock. That’s when I’ve decided to turn to the internet communities, who are as passionate as I am about indie games and their development. I set out with an ambitious goal of gathering the astounding sum of 90 euros. Crazy, I know. But what’s even crazier is my campaign surpassed my wildest dreams and I managed to get 205 euros. Now I was unstoppable.

At first, levels were drawn on a torn-out piece of paper

Humble beginnings are the best beginnings! It was around the time I managed to bring a few very talented guys on to the project with me. We knew that designing over 60 unique levels is going to be very tricky. We had to recreate the maze-like levels from the classic shooters, filled with secret areas, hidden buttons and ammo stashes. Me and Iain Lockhart have put a lot of effort into mapping out intertwining levels in a way that would be true to our inspirations, while at the same time intuitive and flowing for modern players. It took quite a while and lots of paper, but the environments of Project Warlock were laid out. All that was left was to translate them into the digital world. I still have some of the crumbled-up, chaotically scribbled, original drawings.

There are 38 guns in Project Warlock

At the core of every good shooter game are its guns, the tools of trade of every badass protagonist since time immemorial. It took a lot of thought and time, but it was worth it. Project Warlock features 12 base guns, each with 2 distinct upgrade options changing and tweaking the playstyle to your liking. On top of that, there are 2 unique weapons for even more options to deal massive damage. If that wasn’t enough, the game also features 8 spells, to raise even more hell.

You can upgrade and customize your character

I felt that even though the classic shooters were perfect as they were, they could use a tweak or two. To bring the genre into a more modern setting, I’ve decided to allow the players to adjust their character to fit their playstyle, by adding a leveling system, which allows them to allocate experience points into different stats and unlock perks that make the character grow as you play.

Hopefully, these pieces of trivia helped ignite the flame of passion in your heart, whether it be looking to make your own game or simply enjoying some good, old-fashioned retro shooter action. Thanks for reading and be sure to check out the game when it launches on Xbox One on June 12! 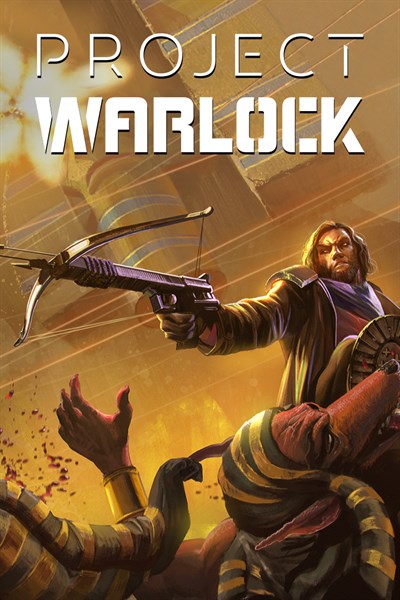 ☆☆☆☆☆ 76
★★★★★
$14.99
Get it now
One man and his guns. Become a mysterious Warlock who embarks onto a dangerous mission to eradicate all evil. Put your finger on the trigger and travel through time and space to wreak havoc like in the golden days of fast paced, adrenaline-pumping first person shooters, hooking you for hours of super fun carnage. Let’s rock and roll! Explore 60 vast levels in five settings, from frozen Antarctic base to the sands of Egypt to the medieval castles’ courts and graveyards. Find keys to unlock passages, reveal secret caches with ammo and gold, use lifts and hidden buttons to access new areas. Finally descend to hell to face the ultimate challenge and emerge victorious. Combat tons of enemies from flying demons to five-storeys robots, splashing walls and floors with their blood and chunks. Dodge bullets and projectiles, figure out strategies and weapons that work best against each of the nasty villains. Learn their moves and stay one step ahead to survive through the levels. Face megabosses in vast final arenas to complete each world. Expand your arsenal with new weapons found along your way. From powerful blades to massive guns, collect and develop your favourite gear and master the craft of carnage. Reach into vast arsenal of 38 types of weapons and learn their secret tricks to deliver maximum damage, fast! Grab ammo and spit out series of bullets, walls of flames, and bursts of magic shots to bring down enemies foolish enough to stand in your way. Develop your hero the way you like, by assigning upgrade points and perks to the favourite skills between each level. Develop and upgrade spells and weapons to create your unique character through the game, and use their powers to master the game in higher difficulty modes.