We’re excited to let all of you know that the sequel of Verdun, Tannenberg, is coming to Xbox One on July 24! Tannenberg is the second game in the WWI Game Series that we’re releasing.

We remastered our WWI FPS Verdun last December doing all the work in-house and focusing on making the player’s experience even more intense. Because Tannenberg and Verdun both run on the same underlying engine, we also wanted to ensure both games would meet the requirements for Xbox One X Enhanced status. The Verdun remaster update saw some great success on Xbox One, so it was a no-brainer for us to go on and do the development work for Tannenberg on Xbox One ourselves as well.  Since the remaster, Verdun has been making the most of the awesome power of the Xbox One, and we can assure you that Tannenberg will as well! We even added a brand new map to the game as well, set at the fortified town of Przemyśl – site of the longest siege of the First World War!

In Tannenberg players can experience the massive battles of the Eastern Front in WWI with up to 40 players fighting for control of key sectors on the battlefield, each one offering a distinct strategic advantage. The fighting between the Russian Empire, Germany and their allies offers a fresh experience for first person shooter players and history enthusiasts alike. It’s also very different from the gritty trench warfare that typified the Western Front as depicted in our first game Verdun. The battles on the Eastern Front take place on a much wider scale and over more varied terrain, with a lot more focus on maneuver warfare. As history enthusiasts, creating Tannenberg was a fascinating chance to dive into a side of the war that doesn’t see as much coverage as the Western Front.

Assault the Przemyśl fortress in a new map at release!

Development took a little longer than expected, especially as we wanted the game to be Xbox One X Enhanced as well. As a thank you for the patience of the Xbox community, we’ve added an exciting new map to the game: Przemyśl. The fortified city of Przemyśl became infamous in WWI as the scene of one of the longest sieges in the First World War, which resulted in a spectacular loss for the Austrian-Hungarian army against the besieging Russian troops. The Russian victory was short lived, as a German offensive brought forward super heavy mortars which devastated the fortress. This new map adds even more variety to Tannenberg, which already contains battlefields ranging from the swamps of Latvia and vast Polish plains all the way to Roumanian mountain peaks.

Tannenberg and Verdun are part of our WWI Game Series. These authentic WWI first-person shooters let players choose from a plethora of different squads that took part in the Great War as they try to capture or defend the varied landscapes of the Eastern Front, including many of the smaller nations who participated in the war yet are rarely included.

Extra effort has been put into recreating the atmosphere of the Eastern Front, with the same level of detail and accuracy seen in Verdun. A lot of research has been put into the uniforms, gear and weapons in order to get the tiniest details right. The maps are filled with realistic props and terrain layouts based on the actual locations; from the forests of Galicia to the Polish villages that were subjected to brutal scorched earth tactics and more!

So what can you expect?

We took the opportunity to add to the intensity and feel of the game in order to make optimal use of the added graphical processing power of the Xbox One. Across large maps players can participate in 40 player battles, with up to 20 bots to help fill the roster out. The gore effects (which are optional) will be of the same level that we offer in the Verdun console version in order to keep the game performance nice and smooth.

Pre-order with a discount!

In order to enlist more soldiers for the Eastern Front, we have a special 10% pre-order discount for the Tannenberg Xbox One release. We hope to see you in the forests and on the steppes of the East on July 24! 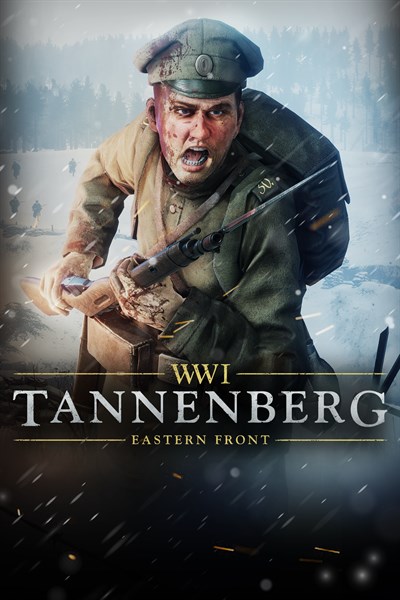 ☆☆☆☆☆ 155
★★★★★
$19.99
Get it now
Xbox One X Enhanced
Tannenberg brings the massive battles of the Eastern Front in WW1 to life with 40 players fighting for control of key sectors of the battlefield, each one offering a distinct strategic advantage. Warfare between the Russian Empire, Germany, and their allies offers a fresh experience for first person shooter players and history aficionados alike. There are seven squads, 50+ weapons, nine large maps that give players tactical freedom, and a 40 player game mode with full AI bot support so you can experience epic battles at any time! Everything has been recreated with the same attention to detail seen in Verdun, the first entry in the WW1 Game Series. WW1 ON THE EASTERN FRONT This historical game takes place across the lakes, forests, mountains and snowy plains of the Eastern Front – it was inspired by the Battle of Tannenberg in 1914, one of the most iconic encirclement battles in history. Players will be able to master a range of authentically modelled equipment brought to the field by Russian Frontovik and Cossack squads, Latvian Riflemen, the Roumanians, or join the Central Powers to serve in an Austro-Hungarian K.u.K. squad, German Infanterie, or the Bulgarians. Tannenberg offers several game modes – including the exciting Maneuver game mode reflecting the nature of war on the Eastern Front, as 40 players battle across large maps where the objectives and battle lines are always shifting. Survive the deadly battles by working together with your four man squad and utilizing your distinctive skills. There is a wealth of historical detail including realistic WW1 weaponry, authentic uniforms, horrendous gore, and maps based on real battlefields. The WW1 Game Series currently includes Tannenberg, Verdun (set on the Western Front) and the upcoming Isonzo, which is set on the Italian Front. We recreate the atmosphere of the Eastern Front with the same level of accuracy as seen in Verdun. Extensive research has been conducted, with uniforms recreated to the tiniest detail and weapons modelled to exact references. The maps use realistic props and terrain layouts based on locations from the hilly forests of Galicia to a Polish village subjected to scorched earth tactics. AUTHENTIC WORLD WAR 1 SETTING It’s all-out war on the Eastern Front! From artillery barrages and poison gas to the deadly heavy machine gun and hard-hitting rifle, there are many weapons to master. The battlefield is a dangerous place, and a little thought will help you stay alive – lead your shots, keep your eyes open, and be ready to engage in ferocious close combat at any moment. Tannenberg’s Maneuver game mode captures the essence of warfare on the Eastern Front, with 40 players, large open maps, and the freedom to choose which sectors you will attack and defend. Just make sure you don’t get outflanked and encircled before you can do the same to your enemies! Gore and blood can be disabled completely with an in-game setting.