Grab your board — it’s time to hit the park. Developed by Vicarious Visions, Tony Hawk’s Pro Skater 1 and 2 is now live on the Xbox Store.

Radically remastered for Xbox One and in stunning 4k resolution on Xbox One X, this remaster takes players back to the skateboarding world of the late ‘90s with the levels, pro skaters, tricks, modes, and songs from the original games, plus new skaters, music tracks, and more.

Tony Hawk is back. Let’s look at some of the highlights:

Pick a Legend or Create Your Own

Prefer your own look? Select Create-A-Skater and pick their name, hometown, and skating style, and customize their look and their trick set. Whatever your style is, you’re covered. Your skater will gradually improve as you grab stat point collectibles in each skate park, boosting their ability scores.

Riding solo? Jump into a Free Skate or timed Single Session. Once you’ve had some practice, achieve your goals and earn medals in Tours, featuring the Tony Hawk Pro Skater and Tony Hawk Pro Skater 2 remastered career experiences. Then, post up your best times in Speed Run, a new experience featuring park leaderboards that pit you up against friends and the rest of the skating world.

Have your own park design in mind? Check out Create-A-Park, a robust level editor that gives you the tools to create parks as simple or ridiculous as you like.

Compete Online and On the Couch

For those with an Xbox Live Gold subscription, you can join up to seven other players for online play and compete in some iconic multiplayer modes.

That includes the traditional Score and Combo Challenges, time-based Trick Attacks, and Combo Mambo, where the skater with the highest combo score wins. You can also assert park dominance in Graffiti, where the winner is whoever tags the most objects in a skate park, done by performing the highest scoring trick on them.

Ready to compete for glory, or would you rather chill with the crew? In the casual Jams playlist, the top four skaters win each mode, while only the top player wins in competitive playlist games. Both playlists feature their own leaderboards, and players get the chance to warm up in Free Skate before the competition starts.

Stay tuned for a fall update to online multiplayer, which will add private sessions and other party features like leader promotion and party migration.

The franchise’s classic local two-player split-screen multiplayer also returns, where outside of online competitive modes, you can load up Tag to see who can gain enough speed via tricks and combos to avoid being “it” before the timer hits zero. Or, you can kick it old school in H-O-R-S-E, where skaters can make some sick lines and see if their friend can hit it just as well, or bail under pressure.

See you at the park! 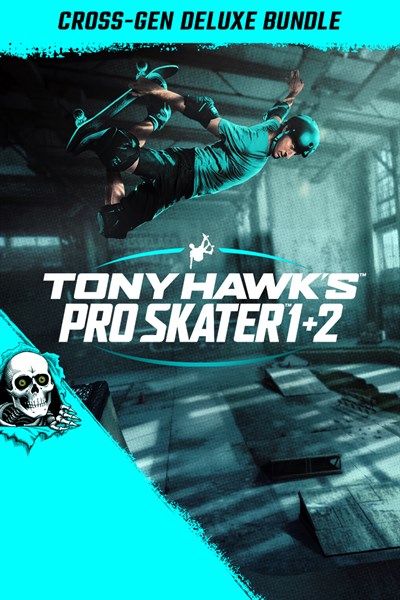 ☆☆☆☆☆ 229
★★★★★
Get it now
Xbox One X Enhanced
Buy this digital Xbox One version of Tony Hawk's™ Pro Skater™ 1 + 2 from the Xbox Store and download the Xbox Series X|S version on March 26th at no extra cost. The Cross-Gen Deluxe Bundle includes: – Cross-Gen Deluxe Bundle of Tony Hawk's™ Pro Skater™ 1 + 2 — Includes Xbox One and Xbox Series X|S version of the game when it launches on March 26th – Digital Deluxe Edition Content: — ‘The Ripper’ skater from Powell-Peralta® — Unique retro outfits for Tony Hawk, Steve Caballero and Rodney Mullen — Unique retro content for the Create-A-Skater mode Drop back in with the most iconic skateboarding games ever made. Play Tony Hawk’s™ Pro Skater™ & Tony Hawk’s™ Pro Skater™ 2 in one epic collection, rebuilt from the ground up in incredible HD. All the pro skaters, levels and tricks are back and fully-remastered, plus more. Certain elements and functionality require internet connection and Xbox Live Gold subscription, sold separately. Storage requirements subject to change. Mandatory updates may be required to play. Downloadable content may be made available to purchase. Activision makes no guarantee regarding the availability of online play or features and may modify or discontinue those at its discretion without notice. Using the software constitutes acceptance of the Software License & Service Agreement and Privacy Policy available at support.activision.com/license. © 2020-2021 Activision Publishing Inc. ACTIVISION and PRO SKATER are trademarks of Activision Publishing, Inc. Tony Hawk is a registered trademark of Tony Hawk, Inc. All other trademarks and trade names are property of their respective owners.