The cult RPG that redefined intense, customizable combat is back and better than ever! Kingdoms of Amalur: Re-Reckoning delivers new zone level calculations, changes to loot generation rules, the removal of level lock, major improvements to visual presentation plus a whole new difficulty mode. Did I mention that we packed all the DLC into the game, as well? We’re talking countless hours of iconic gameplay in one, faithfully remastered RPG.

Kingdoms of Amalur is a beloved RPG experience, especially for the teams at THQ Nordic and Kaiko who have been preparing the remaster for the current generation of gaming PC’s and consoles. That said, we felt there were opportunities to improve the player experience beyond the more obvious graphical upgrades.

Among these changes is the all new, Very Hard mode. We feel this will be very well received by players familiar with Kingdoms of Amalur. We have created a series of brand new challenges for the experts out there to sink their teeth into.

We also felt that Level Lock and Zone Level Calculation needed to be addressed. The original game determined the skill level of a zone upon the player first entering and that level was then stored in a save file. In Re-Reckoning, we’re able to calculate the player level every time the player enters or re-enters the zone. As it relates to changes to Zone Level Calculation, the original game had all zones marked with a minimum and maximum level. Upon entering a level, the current player level was clamped into this minimum/maximum range and stored as the player’s skill level.

We now use the current difficulty level as a means to determine the skill level before clamping into the minimum/maximum range. On Casual difficulty, the skill level is reduced a bit; on Hard and Very Hard, it is increased. We also increased the maximum values for Hard and Very Hard difficulty settings. The XP gain has been reduced to cater to the increased level of enemies and we made sure that XP is not increased when playing on harder difficulties due to the effect of beating higher level enemies. The result of all of this is that you can still out-level zones – which is desirable if it doesn‘t happen too quick. It is part of the power fantasy to be able to come back to initial zones and be overpowered.

The loot system received a complete overhaul. Loot containers now only store their generated loot when they are opened. In the original, loot containers stored loot when entering a zone and were generated to the current player level. Loot generation rules were also altered so players will more often get items that fit their characters skillset. Loot is mostly randomly generated but we increased the weights of loot to more closely match the players skill lineup. We also added a virtual counter that increases the chance of better loot drops when you didn‘t find anything good.

These quality of life enhancements are presented with improved textures that more than double Kingdom of Amalur: Re-Reckoning’s resolution. Players can also look forward to improved lighting and new shadow implementation.

It’s time for RPG players to rule Amalur like never before! 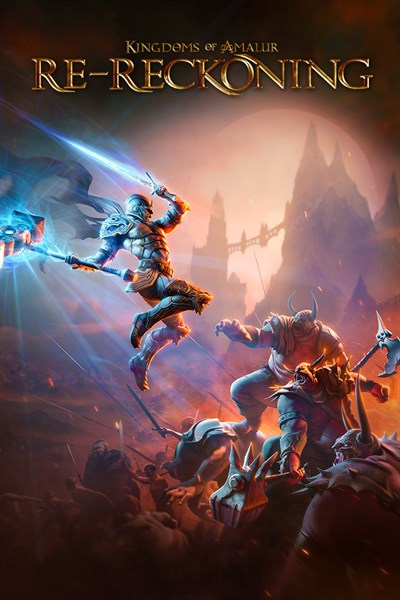 ☆☆☆☆☆ 235
★★★★★
$39.99 $17.99
Get it now
The hit RPG returns! From the minds of the bestselling author R.A. Salvatore, Spawn creator Todd McFarlane, and Elder Scrolls IV: Oblivion lead designer Ken Rolston, comes Kingdoms of Amalur: Re-Reckoning. Remastered with stunning visuals and refined gameplay Re-Reckoning delivers intense, customizable RPG combat inside a sprawling game world. ———- Uncover the secrets of Amalur, from the vibrant city of Rathir to the vast region of Dalentarth to the grim dungeons of the Brigand Hall Caverns. Rescue a world torn apart by a vicious war and control the keys to immortality as the first warrior ever to be resurrected from the grips of death.