Fallout 76’s latest patch is now available on Xbox One, and it’s a big one. Complete with a new Season, a new daily repeatable missions, Legendary Perks, and a rebalanced combat across the game, Patch 22 packs a punch. Learn more about the highlights you’ll find in this new patch below.

The biggest update coming in Patch 22 is a complete game-changer. The One Wasteland system adds a brand-new level of freedom to how you explore Appalachia. With this new system you can traverse the wasteland however you want, whenever you want and with whomever you want, even if you’re a newcomer to the game. Previously, new or low-lever players might have faced serious difficulty if they ventured too far away from the early game area, encountering creatures way too difficult for them to handle. But with One Wasteland, those creatures will level set to each individual player.

“One Wasteland is our name for re-balancing the game to make is so that low level players have a less difficult experience at the beginning of their Fallout 76 adventure, and so that higher level players continue to be challenged,” explains Project Lead Jeff Gardiner. “New players will now be able to explore the wasteland of West Virginia without the difficulty spikes that they would previously encounter. For Veterans, they’ll be able to go back to several previous areas of the game and find new challenges. And both types of player will be able to group together to build, quest, and tackle events, as monsters are leveled in real-time to compensate for any level differences. A low-level player will be fighting a low-level monster, while a high-level player a high-level monster.”

This flexibility will also allow lower-level players to take on more active roles in Events and various activities throughout the wasteland as they travel with higher-level teammates. Everyone gets to shine, and everyone gets a balanced challenge, no matter their level.

Gardiner explains that this update was based on a desire they had very early on in the development process. “When we first launch 76 we endeavored to have a more level playing experience,” he says. “But with our unlimited leveling system, and crazy build and weapon combinations, that did not turn out to be the case.  We originally leveled a zone based on a banded range, but it depended on the first character in the zone. Meaning a zone could be level 20 to 60, which is great if you’re the first player in. However, if you came in after someone else, the zone would level to them. This meant that it was often punishing for low level players who came into that zone behind someone who was much more experienced at the game.”

The second Season also kicks off with Patch 22, and features a new S.C.O.R.E.board and awesome new rewards. In Season 2, you’ll Join the true American champion, Armor Ace, and his patriotic Power Patrol on their march to freedom across the globe to defeat the Subjugator!

As with The Legendary Run, there will be 100 ranks for you to achieve during our second Season. As you rank up, you’ll unlock tons of rewards including:

“There were lots of lessons to learn during Season 1, and we were thrilled with the level of player engagement and feedback that we got in the inaugural season,” says Senior Economist James Phillips. “One of the key areas we tried to improve throughout Season 1 and now into Season 2 is the amount of S.C.O.R.E. available to be earned through the Daily and Weekly Challenges. We added variety of double S.C.O.R.E. Events and extra challenges, and we permanently increased the amount of daily challenges to give players more options to progress to Rank 100.  That being said, we heard continued feedback on players wanting more of the S.C.O.R.E. to be moved into Weekly Challenges instead of Dailies, so in Season 2 we are increasing the number of Weeklies in response and moving some of the S.C.O.R.E. earned from Daily Challenges to Weekly Challenges.”

Looking to get even more out of your Perks? Legendary Perks are coming as part of Patch 22 and will allow players to start unlocking additional power gains and prestige at level 50. Starting at level 50 players will unlock slots for Legendary Perks, and each Legendary Perk will have four upgradeable ranks, which you can reach by scrapping unwanted Perk cards. These new Perks live in their own category within the S.P.E.C.I.A.L. menu and aren’t tied to S.P.E.C.I.A.L. stats.

Some of the Legendary Perks include:

In addition, you might also get a Legendary boost to your S.P.E.C.I.A.L. stats, that give you bonus points in a specific stat as well as bonus Perk Points for that stat. These Legendary Perks will also increase as you rank them up. For example, if you have rank 3 Legendary Strength, you’ll get +3 Strength and +3 Strength Perk Points. (Perk Points cap at 15.)

Legendary Perk slots are unlockable at an account level and can be used by any character under that account, regardless of level, but they are only unlockable by the highest-level character on that account. Once you start unlocking slots, you can have an unlimited number of them. However, unlocking additional Legendary Perk slots takes exponentially larger amounts of time after the first one.

Also coming in Patch 22 is the brand-new Daily Ops system, which offers a replayable element and exciting rewards to dungeon run experience. With Daily Ops, you’ll be able to return to locations you’ve already explored and experience them in a brand-new way with randomized enemies and objectives.

“Our first Daily Ops game mode is called Uplink, which challenges the player to survive in proximity of Uplink devices against aggressive enemy hordes,” says Lead Level Designer Steve Massey. “With future game modes, we want to change up the gameplay so you’re not just fighting in a different room but you’re having a dramatically different gameplay experience. For our second game mode we’re looking into emphasizing stealth and sniper gameplay with fewer but more powerful enemies. Our goal with various randomizations is to make different players feel like the ‘hero’ for the day. Some days you’ll feel like the combination was made specifically for you, and others you may have to group up with friends or Public Teams to get the top tier.”

In addition to randomized enemies and objectives, the foes you face will also have their own unique twists, thanks to the new Enemy Mutation system, which as Massey explains it, functions as “a parallel to the mutations that players can get. They give every enemy you face a superpower that forces you to change play patterns, think creatively and group up to succeed. Enemies can explode on death, freeze you with their attacks, be cloaked when not attacking, or only be killable by a melee attack. Additionally, each game mode features a default mutation that compliments the mode and dramatically changes the way the combat scenarios play out.”

And Daily Ops will just keep evolving, with new Enemy Mutations, new rewards, new game modes and new locations. The team at Bethesda Game Studios will continue listening to player feedback to help drive the future of Fallout 76, and now that feedback will extend to Daily Ops.

“We will be adding plenty of new and existing dungeon locations to Daily Ops over time, with our goal being that every new dungeon will support the current mode Uplink as well as all future modes,” says Massey. “In addition to popular locations like West Tek and Wendigo Cave, we’re looking into adding community requests like the Raider Arena version of Watoga Civic Center. In terms of launch locations, we’re especially excited about re-introducing Vault 94 to the world as a Daily Ops location, as well as allowing exploration of this location outside of Daily Ops to players who want to explore it at their leisure and discover the story of the vault.” 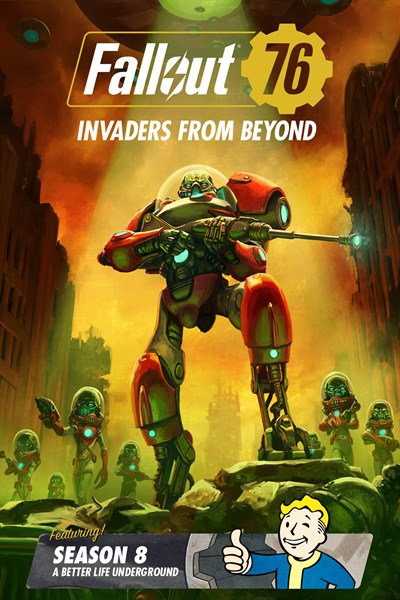 ☆☆☆☆☆ 737
★★★★★
$39.99 $31.99
Get it now
Xbox One X Enhanced
Xbox Game Pass
Bethesda Game Studios, the award-winning creators of Skyrim and Fallout 4, welcome you to Fallout 76. Twenty-five years after the bombs fall, you and your fellow Vault Dwellers—chosen from the nation’s best and brightest – emerge into post-nuclear America on Reclamation Day, 2102. Play solo or join together as you explore, quest, build, and triumph against the wasteland’s greatest threats. Explore a vast wasteland, devastated by nuclear war, in this open-world multiplayer addition to the Fallout story. Experience the largest, most dynamic world ever created in the legendary Fallout universe. Immersive Questlines and Engaging Characters Uncover the secrets of West Virginia by playing through an immersive main quest, starting from the moment you leave Vault 76. Befriend or betray new neighbors who have come to rebuild, and experience Appalachia through the eyes of its residents. Seasonal Scoreboard Progress through a season with a completely free set of rewards like consumables, C.A.M.P. items and more, by completing limited-time challenges. Multiplayer Roleplaying Create your character with the S.P.E.C.I.A.L system and forge your own path and reputation in a new and untamed wasteland with hundreds of locations. Whether you journey alone or with friends, a new and unique Fallout adventure awaits. Mountain Splendorland The story lives and breathes through the world of Fallout 76, which brings to life six distinct West Virginia regions. From the forests of Appalachia to the noxious crimson expanses of the Cranberry Bog, each area offers its own risks and rewards. A New American Dream Use the all-new Construction and Assembly Mobile Platform (C.A.M.P.) to build and craft anywhere in the world. Your C.A.M.P. will provide much-needed shelter, supplies, and safety. You can even set up shop to trade goods with other survivors. Fallout Worlds Play unique adventures in Appalachia with Fallout Worlds, which is an evolving set of features that give players the capability to play Fallout 76 in unique ways with customizable settings.