The universe stands at the brink of destruction and the only savior up to the task carries a double-barrel shotgun and a whole lotta contempt for demons. Become the legendary Doom Slayer and strike fear into the ranks of Hell itself in Doom Eternal: The Ancient Gods – Part One, now available on Xbox One!

Travel across dimensions as you fight to restore balance to the cosmos, tackling every demonic threat that dares stand in your way in this single-player expansion to Doom Eternal’s award-winning campaign. As a new threat emerges from the chaos, it’s not just Earth’s fate that hangs in the balance…

The Ancient Gods – Part One comes as part of the Year One Pass, included in the Deluxe Edition of Doom Eternal or available for digital purchase separately in the Microsoft Store for Xbox.

Need to brush up on your demon slaying technique? Xbox Game Pass members can play the base game Doom Eternal on the Xbox One family of devices today. Be sure to also join the Slayers Club for the latest news, community events and even a chance to earn exclusive in-game content for Doom Eternal, just by being a fan of Doom! 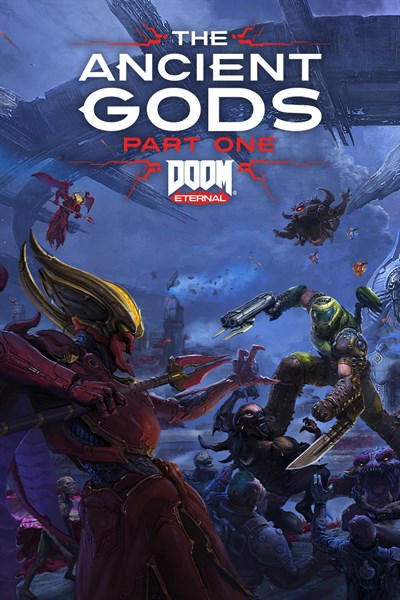 ☆☆☆☆☆ 1362
★★★★★
$19.99 $17.99
Get it now
The Ancient Gods – Part One is the first campaign expansion for the critically acclaimed DOOM Eternal. Your war is not over… The legions of Hell have razed the heavens, threatening to expand across dimensions. Battle your way back to Urdak and decide the fate of the cosmos. Your mission is now your own. NEW MISSION Experience a new mission in your eternal fight against evil. Unleash your vengeance and face your greatest test; restore order to the heavens and unearth the corruption that has thrown the universe into chaos. NEW LOCATIONS From the decks of the UAC Atlantica on Earth to the Blood Swamps of Hell to the demon-infested Urdak, you will visit epic new locations to battle the armies of Hell. NEW ENEMIES Change your tactics as you face Hell’s newest threats that add more depth and challenge to combat. Face the demon buffing Spirit and the deadly Blood Maykr.