It’s been quite a year for ARKS in Phantasy Star Online 2! When PSO2 launched in North America back in March, we promised to bring eight years of content to the game at a breakneck pace. Despite the many unexpected complications that 2020 has brought, we have been keeping that promise to our players, and this latest (huge!) content update is the next step in that process. We want to give a ginormous, heartfelt thanks to all the ARKS who have joined us this year, and we hope you’re looking forward to even more PSO2 goodness in 2021. For now, let’s get acquainted with Episode 6!

As of today, Phantasy Star Online 2’s Episode 6 has officially launched worldwide on Xbox One and Windows 10 PC. This is the final chapter of PSO2’s epic story, which has taken us across the galaxy, to an alternate version of Earth, to the high fantasy realm of Omega, and finally back to the Oracle Fleet for a final showdown. If ARKS has any hope of victory, they’ll need to work together with allies old and new to defeat Shiva and her Armada of Annihilation!

You can download the game now for free on the Microsoft Store.

Returning home after their success in the Alternate Dimension: Omega, a new foe appears. Known as The Goddess of Annihilation, the mysterious Shiva declares all-out war on ARKS. With an enormous fleet of spacecraft, empowered monsters, and heavily armored foes called Luminmech, Shiva’s power in the universe is undeniable. However, the heroes of Fleet Oracle have several aces up their sleeves, including the AIS Vega, a powerful and highly maneuverable mech suit capable of going toe-to-toe with Shiva’s forces. Who will claim victory? It’s up to ARKS to save the day!

Not one, but two new classes join the game today! Critical new additions in Episode 6, the Phantom and Etoile classes bring brand new fighting styles and abilities to the ARKS ranks.

Similar to the Hero class introduced in Episode 5, the Phantom is a master of all forms of combat, including melee, ranged, and magic. However, unlike the Hero, the Phantom relies on agility and flowing movement with the katana, the rifle, and the rod. This new class also gains explosive damage potential when attacking the same enemy multiple times thanks to the “Phantom Marker” feature. If you enjoyed playing as a Hero but wished it had just a bit more edge (and Scythes!), the Phantom is for you!

The Etoile is a unique class to PSO2, in that its focus is supporting party members, rather than their own offensive or defensive capabilities. Equipped with support skills that recharge HP and PP, as well as those that reduce the casting times of their allies, the Etoile is a welcome and valued member in any group. However, the Etoile is not without martial abilities of its own, wielding the double saber, soaring blades, and wand weapon types in unique ways from other classes. The Etoile is a long-awaited class for many PSO2 veterans, and we’re happy to finally put it in the players’ hands!

Along with her Armada, Shiva brings new, more powerful enemies to the planets of Naverious, Lillipa, Wopal, and Harukotan. These locations will now offer UH (Ultra Hard) missions called “Risk Exploration” on a cycling basis. While these missions are available, classic enemies will appear in an “Ultra Enemy” form, with new powers and evolutions. Return to older locations to experience these reimagined fights!

Christmas Has Come to PSO2

It turns out Santa’s sleigh works in space, as Christmas has come to PSO2! Players are able to earn unique, Christmas-themed weapon camos such as the Cariboom (a rifle camo that looks suspiciously like a stuffed reindeer) and the Snowman Cannon (a launcher camo that is exactly what it sounds like). Not to mention, a Santa Rappy Mag Evolution Device! What’s more, the “Merry Christmas On Ice” Urgent Quest offers players powerful weapon rewards for completing the holiday-themed mission. And what ho-ho-holiday celebration would be complete without ARKS’ favorite diva? Quna will be back on the stage of Fleet Oracle to perform the “Eternal Encore (Christmas Version)” show!

More details about Episode 6 can be found at PSO2.com. For additional up-to-the-minute details and updates, players can follow @play_PSO2 on Twitter, @PSO2Official on Facebook and @play_pso2 on Instagram. Stay safe and we will see you in the game! 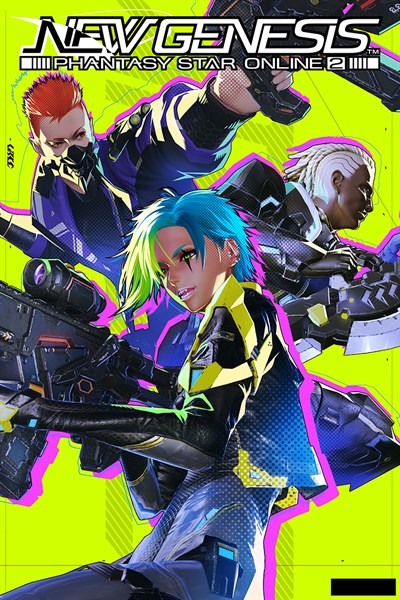 ☆☆☆☆☆ 716
★★★★★
Get it now
Xbox One X Enhanced
Phantasy Star Online 2 New Genesis, the latest chapter in the Phantasy Star Online 2 series, is here at last! It's time to jump into adventures beyond imagination! This new adventure takes place on a vast open field! Up to 32 people can enjoy the adventure in a new world with beautifully-evolved graphics! The simple and intuitive controls developed in the series up to now have also evolved! A new dimension of battle with a variety of powerful enemies awaits! The new actions Photon Dash and Photon Glide allow you to traverse across the vast open field with ease! Of course, the ultimate in character creation has also evolved. Create your own main character that will be unique throughout the world, and head out to a new adventure! ・The core game is Free-to-Play, but there is certain paid content that can be purchased. ・The Phantasy Star Online 2 New Genesis game that can be downloaded with this content is the same as that included in other editions. You do not have to download this if it is already installed. ・Proceeding with play in Phantasy Star Online 2 New Genesis will allow you to play Phantasy Star Online 2. ・Please log in with an administrator account to play this game.