Hello there! Thank you to the entire Xbox community for embracing Dirt 5 since its launch in November last year on Xbox Series X|S and Xbox One. It’s already been one heck of a ride, and the entire Codemasters team has loved seeing your racing antics, photo mode shots, livery designs, and playgrounds creations. Seeing as you’ve given us all of that, it only seems fair to give you something in return, right?

Today marks the first content drop for Dirt 5 of 2021, and we’re kicking things off in a big way with a major game update and content pack. Enough of me blabbering on — let’s get into the fun stuff, and offer up some tips on how to really get the most out of everything coming your way from today…

First up: Say hello to the Energy Content Pack, stuffed full of new items and options for multiple modes. Four new cars join our eclectic off-road garage, headlined by the incredible Porsche Taycan Turbo S — an electrifying supercar with over 700bhp! The Taycan is joined by another European beast, the Alpine A110 Sports X, and they’re flanked by a pair of legendary American trucks, ready for any off-road challenge: the Chevrolet Silverado 1500 and GMC Sierra Pre-Runner.

But the cars are the just the start. The Energy Content Pack adds 25 new career events to conquer, with two new sponsor options holding the key to more new content and customisation options. Bespoke liveries, new player profile options, and custom livery patterns are yours to discover and show off as your progress through the new career thread.

Next, the new Junkyard Playgrounds update, adding more variety and possibilities to Dirt 5’s custom arena creator mode. Over 20 new items are yours to use in this pack, from rusted scraps, to discarded appliances, to a fire-breathing dinosaur structure made of scrap metal. Yes, you read that right! The fresh batch of themed objects can be used together, and with all other existing playgrounds items, in your custom designs.

It’s not just the Energy Content Pack and Junkyard Playgrounds update content that we’ve added today, though. Update 3.00 for Dirt 5 is also going live today, featuring free offerings for all players! Take to the track sporting new liveries for three new cars, all classic and iconic designs for the Ford RS200, Ford Escort RS Cosworth, and Peugeot 205 T16 Evo 2. On top of that, we’ve added a third playgrounds location: Italy joins South Africa and Arizona, and the first to feature a two-tier arena, opening more ways to get creative.

Update 3.00 is available to download now for all players, which includes the new liveries and playgrounds options. For the Energy Content Pack, if you own the Dirt 5 Amplified Edition, or grabbed the Dirt 5 – Year One Update after the game’s launch, the content will be automatically added to your game, whilst base edition players can purchase it now from the Xbox Store.

How to Get the Most from Dirt 5’s New Content

So that’s the key details on the new content – but how do you make the most of it? Whether you’re a career completionist, a playgrounds designer, or a time trial leaderboard leader, we’ve got something new for you to get behind the wheel of.

For the additional career content, it’s as simple as it gets. Head to career from the main menu and a new option, “Energy,” will be available. Head there to find a fresh thread of 25 events to conquer – all-new races with different combinations of car classes, locations, and dynamic weather conditions. Many of the events will include the ability to select one of the four new cars to race with. Alongside the action, the sponsors tab is there to allow you to select either of the two new options. You can switch between sponsors at any time, but if you want to unlock all the new items, make sure to have both Xite and MadCroc as your sponsor for a good run of races each, and those rewards will flow!

The four new cars are spread across two different classes: the Porsche Taycan and Alpine A110 are in Rally GT, whilst the duo of American power trucks are in Pre-Runners. As for the cars with new official liveries, the Ford RS200 and Peugeot 205 are in 80s Rally, and the Ford Escort RS Cosworth is in the 90s Rally class. All these classes are represented in career and the updated playlist of online multiplayer events – and of course, in arcade and time trial events, you can use any car class to your heart’s content. TL;DR – whichever way you play Dirt 5, you’ll get plenty of new experiences through the new content.

Playgrounds will of course be full of new opportunities, the moment you jump into Dirt 5 with the new content. Right now, you can check out amazing playgrounds using both the new location and junkyard items, to spark some inspiration before making and sharing your own.

Kicking Off a Year of Dirt 5 Deliveries

As recently announced, Dirt 5 will join the Xbox Game Pass library on February 25! XGP members will have access to the game with Update 3.00 installed, meaning the new playgrounds options, liveries, and more will be waiting for you. We can’t wait to welcome more of the Xbox community into the bold racing world of Dirt 5. Enjoy yourself and let loose, people!

And… breathe. As you can see, there’s plenty to get stuck into with the new Dirt 5 goodies and Update 3.00, which will also tweak and refine all aspects of the game, based on reports and feedback from our community. We’re starting the year as we mean to go on; content drops, free stuff, new options, and further improvements will keep coming throughout 2021, and that starts right now with the Energy Content Pack and Junkyard Playgrounds Pack. Ready to race? 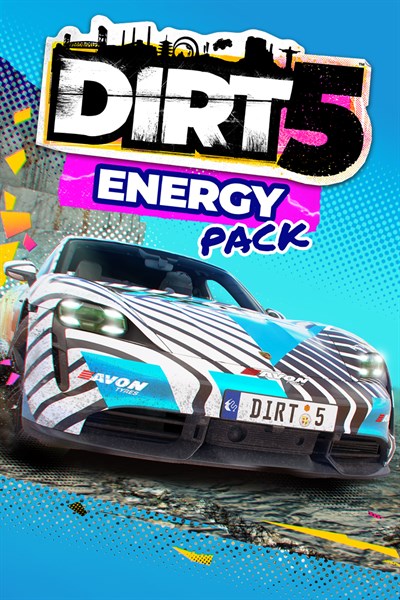 ☆☆☆☆☆ 2
★★★★★
$12.49 $11.24
Get it now
"Legends of the American and European automotive scenes are represented in the four new cars as part of the Energy Content Pack. West of the Atlantic, the Chevrolet Silverado 1500 and GMC Sierra PreRunner burst onto the scene – two trucks with immense power, adapted to survive the most extreme conditions. To the east, we find the eye-catching Alpine A110 Sports X – an experimental effort by the iconic French manufacturer, combining sportiness and ruggedness to conquer all routes. The same can be said of the Porsche Taycan Turbo S, a revolutionary electric monster, generating well over 700bhp to mix futuristic power with precision engineering – perfect to let loose around DIRT 5’s varied global routes. All four cars are playable in all game modes – including in Career, where we’re adding another 25 bespoke events for you to take on, many of which using classes which feature the four new cars in DIRT 5. Head to Brazil, New York, South Africa, Nepal and more destinations to take part in new scenarios, including dynamic and extreme weather conditions to overcome. Two new exclusive sponsor options will also be available in Career – Xite and MadCroc – and completing the new events when signed to these sponsors will unlock new personalisation items, such as bespoke liveries, stickers, lanyards, and custom livery editor options." To use the content within this pack, you must own DIRT 5. This pack is included as an entitlement for Amplified Edition and Year One Upgrade / Edition owners.

☆☆☆☆☆ 182
★★★★★
$59.99 $47.99
Get it now
PC Game Pass
Xbox Game Pass
Let Loose Whilst respecting the heritage and retaining the DNA of the franchise, DIRT 5 writes a new chapter in the legacy of DIRT – bolder and braver than ever before. New features, new innovations and a fresh approach make DIRT 5 a hub of off-road racing, style and culture, where you can constantly create highlight-reel moments. Blaze a Trail Across the Globe Take a trip around the world to and race on over 70+ unique routes across 10 different global locations in stunning, dynamic environments. From racing on the frozen East River in New York, to under the Christ the Redeemer in Brazil, to shining by the Northern Lights at Norway, take on opponents, the terrain and extreme, everchanging conditions. Push The Limits with Incredible Cars Get behind the wheel of an eclectic and exciting roster of cars. Conquer the toughest of terrain with boulder-beating machines, take iconic rally cars to new locations, or feel the power of 900bhp sprint cars. Rallycross, GT, unlimited trucks, buggies and muscle cars complete the ultimate off-road garage. Own the Spotlight in a Star-Studded Career Under the tutelage of an icon, all eyes are on you to become the new star of an amplified world of off-road racing. Earn sponsorships and unique rewards, conquer all locations, and take on a fierce rival in our biggest ever Career. Compete or Co-Operate in Off-Road Action Local split-screen up to four players on offline modes, including Career, makes DIRT 5 the perfect couch multiplayer racing game as you battle for position with your friends. Online, throw down in curated race playlists for up to 12 players, and compete in innovative objective-based modes. Create, Share and Discover with Playgrounds For the first time in a DIRT game, you can now create your own Gymkhana, Smash Attack and Time Attack challenges and share them online with friends and the DIRT community. Game leverages Smart Delivery allowing access to both the Xbox One title on 3rd November and the Xbox Series X|S title on 10th November.