Tons of exciting announcements for Fallout 76 were unveiled during the Xbox & Bethesda Games Showcase. Should you be a veteran denizen of Appalachia or a brand-new Vault Dweller, there’s so much to look forward coming to the wasteland. From new quests to Free Play Days and sales, check out our roundup of what’s on the way to Fallout 76!

Decide the Fate of the Brotherhood in Steel Reign

Save Appalachia from an unknown threat – and the Brotherhood of Steel from themselves – in Steel Reign, a new questline coming July 7 in a free update for all Fallout 76 players!

As seen in the Steel Down questline, the Appalachian Brotherhood is stretching thin as they struggle to protect the region. Travel to new locations, uncover new secrets and navigate the rift between Paladin Rahmani and Knight Shin, shaping the future of the Brotherhood itself.

From June 15 to July 6, assist the Brotherhood of Steel during the Coming Storm event. During this event, players can complete challenges and earn special loot leading up to the Steel Reign questline!

Venture Outside of West Virginia with Expeditions: The Pitt

Ready to embark on your adventure for the first time? Xbox Live Gold and Xbox Game Pass Ultimate members can enjoy the Fallout 76 experience for free during Free Play Days! Until June 16, play the game for free and carry over your progress by purchasing the Base or Deluxe edition of the game – both on sale alongside the Recruitment Bundle in the Microsoft Store for a limited time! To learn more, check out this article. Learn some useful tips and tricks to Fallout 76 with our beginner’s guide here.

Keep up to date on Appalachia’s latest happenings by following the official Fallout Twitter account, or visit Fallout.com for the latest news, Atomic Shop updates and even Inside The Vault content directly from Bethesda Game Studios! 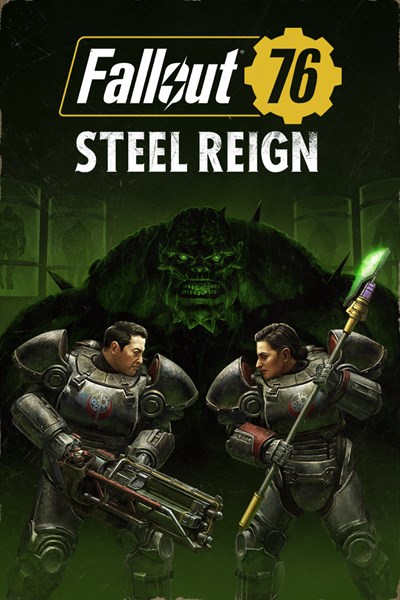 ☆☆☆☆☆ 618
★★★★★
$39.99
Get it now
Xbox One X Enhanced
Steel Reign brings the conclusion of the Brotherhood of Steel storyline. You arrive back at Fort Atlas to find the tensions between Paladin Rahmani and Knight Shin have reached a boiling point. After swarms of Super Mutants start to appear and people are reported missing, how will you guide the Brotherhood? Will you take the side of justice or will you remain committed to duty? Free for Fallout 76 Players. The Steel Reign update includes: · New Questline – Choose what direction the Brotherhood of Steel will take and solve the mysteries behind the appearance of the Super Mutants · New Locations and Gear – Unlock unique gear and explore new locations as you uncover what's been happening in Appalachia · Season 5 Scoreboard – K.D. Inkwell is back in Escape from the 42nd Century! Rank up to unlock new rewards including C.A.M.P. items, cosmetics, and more. · Legendary Crafting – Put those Legendary Modules to work and create your own 1, 2, & 3-star legendary items, right from the comfort of your own C.A.M.P.