One of the biggest benefits of all that power in the hardware is giving developers the ability to make games that are Xbox Series X|S Optimized. This means that they’ve taken full advantage of the unique capabilities of Xbox Series X|S, both for new titles built natively using the Xbox Series X|S development environment as well as previously released titles that have been rebuilt specifically for the console. In our Inside Xbox Series X Optimized series, these creators will share the behind-the-scenes accounts of how they’re optimizing their titles for Xbox Series X|S and what that means for the future of gaming. Today, we’ll be chatting with Assistant Producer at Rebellion Thomas Waterhouse-Biggins about optimizing Sniper Elite 4 for Xbox Series X|S.

Q: What excites you most about developing and bringing Sniper Elite 4 to life on next-generation hardware?
A: Sniper Elite 4 is a game we’re immensely proud of as a studio and it’s exciting to be able to return to it to further improve the experience. We are now able to run the game at 4K at 60fps thanks to the next generation hardware, giving players a smoother and sharper experience. The title was FPS Boost enabled thanks to Microsoft, which it gave us a great starting point to build upon for a next generation version of Sniper Elite 4. After we had worked on Zombie Army 4 for Xbox Series X|S, we knew we could go even further to bring additional benefits for players.

Q: In addition to benefiting from the power and performance of Xbox Series X|S for quicker load times etc. what Xbox Series X|S features were you most excited to explore leveraging in the development of Sniper Elite 4?
A: When we first got the game running at a better frame rate and resolution, it was a very cool moment but we wanted to see how else we could improve the game. This led us to implementing a technique called Contrast Sharpening. On top of the resolution increase, this new feature creates an even clearer image and shows a great level of detail. In addition, the extra power allowed us to maintain the detail of the environment and objects even when at a distance. This is a huge bonus for the open levels and the variety of vistas found across the game.

Q: How will these enhancements impact a player’s experience with Sniper Elite 4?
A: With the game taking place in Italy, we were really able to take advantage of the amazing looking locations there when creating the levels. The power of the Xbox Series X|S allows us to show these locations at their best, from the sunny fishing town of Bitanti Village to the thick forest of Regilino Viaduct. We took a more open world approach to the level design for Sniper Elite 4 and it’s exciting to see these landscapes running at 4K while sticking to a solid 60fps.

Q: Why did your development team choose to focus on increase resolution and higher frame rates as enhancement areas for Sniper Elite 4?
A: Sniping is a core part of the experience in the game and thanks to increased frame rate and higher resolution, it has never felt better. The frame rate improvements increase the responsiveness, which in turn allows for even more precise shots. The increased resolution makes it easier to survey the open areas and pinpoint enemies, as well as see all the gory detail in the bullet cams. The end result is that it is now even more satisfying to pull off the perfect shot.

Q: How do you expect fans of Sniper Elite 4 will respond to playing it on Xbox Series X|S with these enhancements?
A: Our fans come to the series for authentic World War II sniping action and the enhancements only add to that experience. Whether that’s playing through the campaign, jumping online with a friend for some co-op action, or taking on the world in a variety of competitive multiplayer modes; all players will benefit when playing on Xbox Series X|S.

Q: What is it like developing on Xbox Series X|S?
A: The initial process of getting the game up and running on the new hardware was both quick and easy. Thanks to our experience with Zombie Army 4 earlier in the year, we knew that we could comfortably add these improvements. It wasn’t long before we could see the benefits of the faster loading times with increased frame rate and resolution and what that would mean for players. The ease of development from Zombie Army 4 meant we couldn’t resist going back and revisiting Sniper Elite 4.

Q: Which enhancement were you most excited about to explore leveraging for Sniper Elite 4 on Xbox Series X|S?
A: It’s difficult to say, thanks to the improved loading you can jump into the large levels much quicker and during gameplay, the levels look amazing and the controls are much smoother. Personally it was great seeing the enhancements come together to improve the bullet cams. We always enjoy all the amazing sniping shots that players achieve and people’s reactions to the bullet cam. Therefore, it’s great to be able to give players an even better version.

Q: What does Xbox Series X|S development enable in current or future projects that you could not have achieved with the previous generation of consoles?
A: With each new game in the Sniper Elite series, we’ve pushed ourselves to improve and evolve the gameplay to ensure we deliver the ultimate sniping experience. Xbox Series X|S gives us the chance to take further steps forward for the series and we can’t wait to take full advantage of the consoles in our future titles. 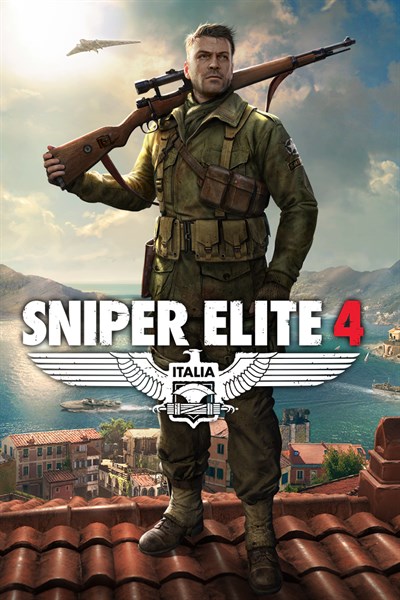 ☆☆☆☆☆ 281
★★★★★
$59.99
Get it now
Discover unrivalled sniping freedom in the largest and most advanced World War 2 shooter ever built. Experience tactical third-person combat, gameplay choice and epic longshots across gigantic levels as you liberate wartime Italy from the grip of Fascism. Set in the aftermath of its award-winning predecessor, Sniper Elite 4 transports players across the beautiful Italian peninsula, from sun-drenched Mediterranean coastal towns, to ancient forests, mountain valleys and colossal Nazi megastructures. Covert agent and elite marksman Karl Fairburne must fight alongside the brave men and women of the Italian Resistance and defeat a terrifying new threat with the potential to halt the Allied fightback in Europe before it’s even begun. EXPANSIVE CAMPAIGN Encounter hours of gripping gameplay in huge campaign levels with hundreds of enemies, vehicles and high-ranking Nazi officers to hunt. Forge your own path to your objectives, uncover new sniper nests, find secret side missions, collectibles and more! AWARD-WINNING SNIPING Experience genre-defining rifle ballistics where snipers must take account of wind, gravity and heart rate to land satisfying shots over hundreds of meters. EXTENSIVE ARSENAL Adapt seamlessly to any combat situation with an impressive array of iconic World War 2 sniper rifles, pistols, submachine guns, heavy weapons, traps, grenades and explosives. DEEP CUSTOMISATION Hone your combat effectiveness by upgrading skills and tweaking key weapon traits such as scope magnification, muzzle velocity and stability. Create and edit custom loadouts for any encounter. SLICK TRAVERSALS AND TAKEDOWNS Climb, hang, shimmy and leap your way across the game’s vast environments to get the drop on enemies and deliver killing blows from behind cover, hanging over ledges and more! ACCLAIMED X-RAY KILL CAMS Sniper Elite’s acclaimed X-ray Kill Camera returns with all-new visuals and features, now framing your most impressive melee attacks and explosive trap kills in bone-cracking detail. TACTICAL CO-OP Play the entire campaign online with another player or jump into dedicated co-operative game modes for up to 4 players. THRILLING MULTIPLAYER Take Sniper Elite’s trademark sharpshooting into unique competitive play for up to 12 players in 7 modes across 6 custom-designed maps. Even more modes and maps will be released FREE after launch!