Today, Team17 are releasing the long-awaited Epic Chef on Xbox One! Epic Chef is a story-driven adventure game flavoured with life-sim farming, and crafting elements, blended into one delicious dish via an interactive cooking experience – all served with a side of humour and elaborate cast of characters. From humble beginnings you will build a farm, grow delectable ingredients, craft machinery, and cook your way to becoming the most Epic Chef in Ambrosia!

Check out our mouth-watering launch trailer below:

The world of Epic Chef is one full of lively NPCs, of cutthroats, brigands, pirates and friends. We happened to stumble across a missive detailing astute observations of Zest and the activities of Ambrosia, a travel blog of sorts.

When arriving in Ambrosia, the first thing that really catches the attention isn’t the rats scuttling about the port, (which are ever so quick to be picked up by the nearest Ambrosian for a tasty snack), but the plethora of restaurants which adorn the streets; from bijou eateries and restaurant fronts to decadent displays of grandeur. One thing is clear, Ambrosia is a place where the culinary arts are as important as your own kin.

And did I stumble into a treat! Two chefs engaged in culinary battle right before my eyes, with a judge proceeding before the two artisans to deem their dishes worthy or not, they chopped, stirred and sauteed like their very lives depended on it. I was informed by locals that Culinary Chef Battles are a regular occurrence in Ambrosia, and the winner who beats all other Chefs is crowned the Epic Chef, complete with the most grandiose of crowns. Exciting! I look forward to seeing more of these culinary battles during my time in Ambrosia.

After stumbling through a few restaurants and chatting with locals once more, they informed me of a new spirited young chef named Zest who had recently arrived and moved into, and I quote, “The Haunted Mansion at the edge of town”. Apparently, a pioneer by trade, he had taken it upon himself to begin repairing and building up the house, even going as far to convert the nearby land into his own farm.

As I arrived at the farm, I couldn’t believe my own eyes as, amongst the numerous vegetables and well-grown produce, I stood face to face with not only a giant turtle but also a unicorn! My admiration and adoration were soon left fleeting as the unicorn was catapulted through the air and into a machine which I could only describe as a modified mincer. Apparently, such rare creatures are common livestock here in Ambrosia, and every part of them is used in the pursuit of their culinary heights… including their muck.

Far out from the port town harbour of Ambrosia, I spied a boat-full of fisherman, casting their nets and rods wide in order to fish up the tastiest of fish, crustaceans and molluscs. Again, all of this was just in pursuit of culinary heights as back on shore, as the octopus was quickly slung into an oven and cooked into what you see below. I’ve even heard tell of them using freshly cut logs as the base of exotic dishes! You certainly can’t argue that Ambrosian’s aren’t resourceful!

The team at Infinigon have gone above and beyond in their pursuit of culinary mastery, and Epic Chef will feature over 100,000 combinations of dishes, with 27,000 having unique visuals! Whether you’re fishing, growing or taking part in livestock care, just about anything can be used to create a delicacy of delectable dishes, well… depending on your taste!

We hope to see your very own restaurant grown and flourish in Ambrosia when Epic Chef launches today on Xbox One, and for the first week of launch we have an exclusive 10% launch discount for all users, with an extra 10% discount for those who own any Overcooked game, or My Time at Portia! 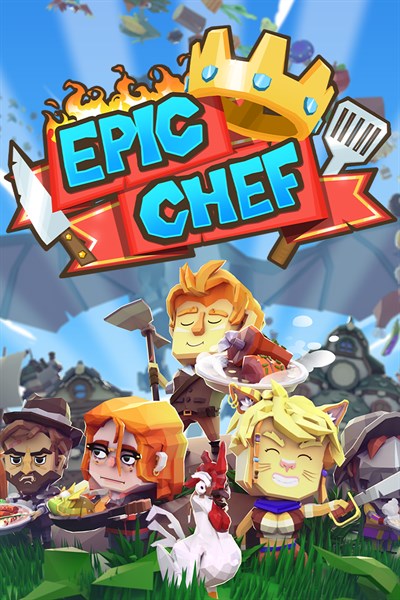 ☆☆☆☆☆ 44
★★★★★
$24.99
Get it now
Free Trial
Epic Chef is a story-driven adventure game flavoured with life-sim farming, and crafting elements, blended together into one delicious dish via an interactive cooking experience – all served with a side of humour and elaborate cast of characters inspired by classics such as Mister Ajikko, or the writing of Sir Terry Pratchett. Grab your spatula and start on your journey to become… Epic Chef! Get ready to embark on a culinary quest unlike any other as you take on the role of Zest; from humble beginnings you will build a farm, grow delectable ingredients, craft machinery and cook your way to becoming the most Epic Chef in Ambrosia! COOKING MASTERCHEF In Epic Chef you will combine ingredients, stirring and tossing with culinary precision to bring out the flavour elements of Vigor, Sophistication and Spirit in your dishes. This forms the core of the cooking experience that you must master in order to become the very best chef in Ambrosia. DELICIOUS DISHES Dish synergy and ingredient properties combine with a dynamic recipe creation system, meaning that you can experiment with thousands of different combinations to create a unique menu of decadent delights. Serving Rats with Tomatoes and Potatoes? Don't you mean Tomato Souffle and Vermin Slices in Starchy Cream?! INTENSE CHEF BATTLES Take on bitter rival chefs in epic culinary clashes to see who is crowned cooking king of Ambrosia! Dishes are scored on a variety of things from ingredients, to flavours, strength and more, with no two judges having the same taste. Become an even greater chef by utilising the addition of sauces to alter the properties of your dishes and influence the judges to win their favour. HOMEGROWN N' HOMEMADE Live off your land by growing foods such as fruit and vegetables, gather resources to craft specialised machinery that can process your ingredients further, and even create new recipe components whilst you tend to an eclectic mix of animal livestock from cows to unicorns! And don't forget to repair and customise your dilapidated (and slightly haunted) villa! VISIT AMBROSIA Welcome to Ambrosia, a place of gastronomic delight and agriculture wonder, renowned the world over. You are free to explore all that Ambrosia has to offer, from winding narrow streets to lush green fields, from quaint restaurants to bustling taverns, all full to the brim with 'friendly' locals eager to meet you.