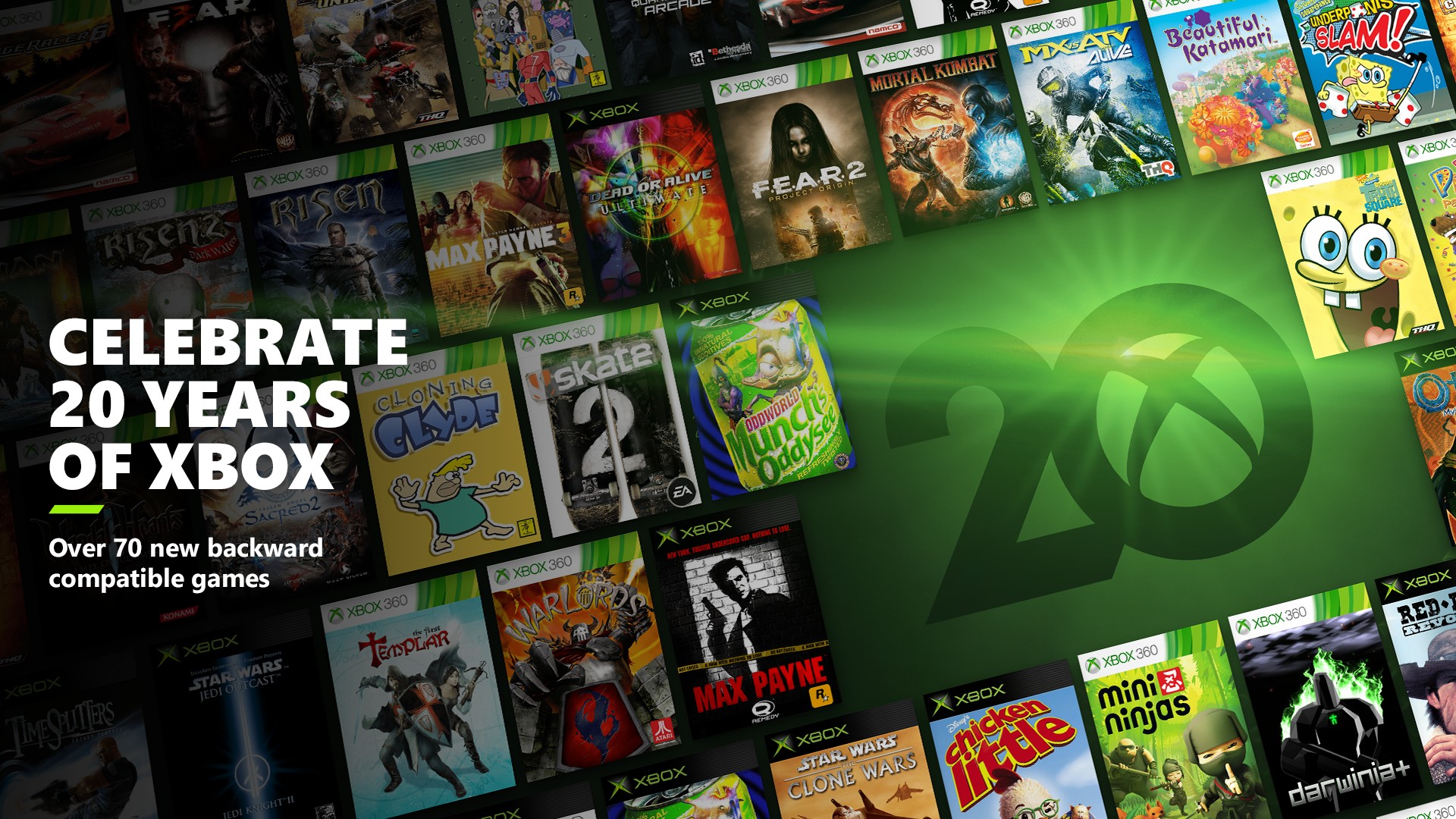 At Xbox, we believe in celebrating gaming and preserving its legacy. No other art form offers the opportunity to be immersed in expansive universes through the combination of stunning visuals, evocative music, emotion-driven storytelling and interactive, living worlds. Since 2015, the backward compatibility program for Xbox One and Xbox Series X|S has made it possible for gamers around the globe to discover and replay thousands of games spanning our 20-year history.

Xbox is also defined by a passionate community that has been with us for every step of our journey – a community that continues to help shape our future. You asked for more games to be added to the backward compatibility catalog, from top-tier blockbusters to cult classics. And we heard you.

Today, we’re excited to add 70+ Xbox 360 and original Xbox games to our backward compatibility catalog in celebration of our 20th anniversary. This includes many of your top requested favorites including:

You can play these games today if you own them on disc or digitally, and the vast majority can be purchased digitally by new players in the Microsoft Store starting later today.

A core tenet since the very beginning of the backward compatibility program has been to not only preserve the games you know and love, but also to enhance them using the latest technology so they look and play better than ever before while still staying true to the original creator’s vision. With Xbox Series X|S, we introduced innovations and improvements such as FPS Boost, Auto HDR, and faster loading times, which breathed new life into classic titles.

Players can easily toggle FPS Boost as well as Auto HDR on or off under the “Manage Game” section for any title. You decide how you want to experience your favorite games, whether in their original form or enhanced with Auto HDR and FPS Boost enabled.

Thank You to the Xbox Community

This latest and final addition of 70+ titles to the backwards compatibility program was only possible through the passion and feedback from the community. Your constant requests for specific titles and enhancements encouraged the Backwards Compatibility team to partner with the original creators to preserve thousands of games from over four generations of Xbox. While we continue to stay focused on preserving and enhancing the art form of games, we have reached the limit of our ability to bring new games to the catalog from the past due to licensing, legal and technical constraints. Thank you for being part of this journey with us.

Together, we’ve celebrated our passion for incredible games and proven the importance of preserving our legacy for future generations of gamers. By empowering players to play the games they want, with the people they want, on the devices they want regardless of where they were originally created, we continue to enable new generations of gamers to experience great games and franchises from the past. Compatibility and game preservation are core to the DNA of Team Xbox and our community, and we are excited to explore new ways to preserve our history and bring the catalog of the thousands of titles available in the Xbox ecosystem to more players via new innovations such as Xbox Cloud Gaming and future platforms.

Check out the full list of today’s titles here.

To check out the thousands of games that are playable on Xbox Series X and Series S, visit xbox.com.