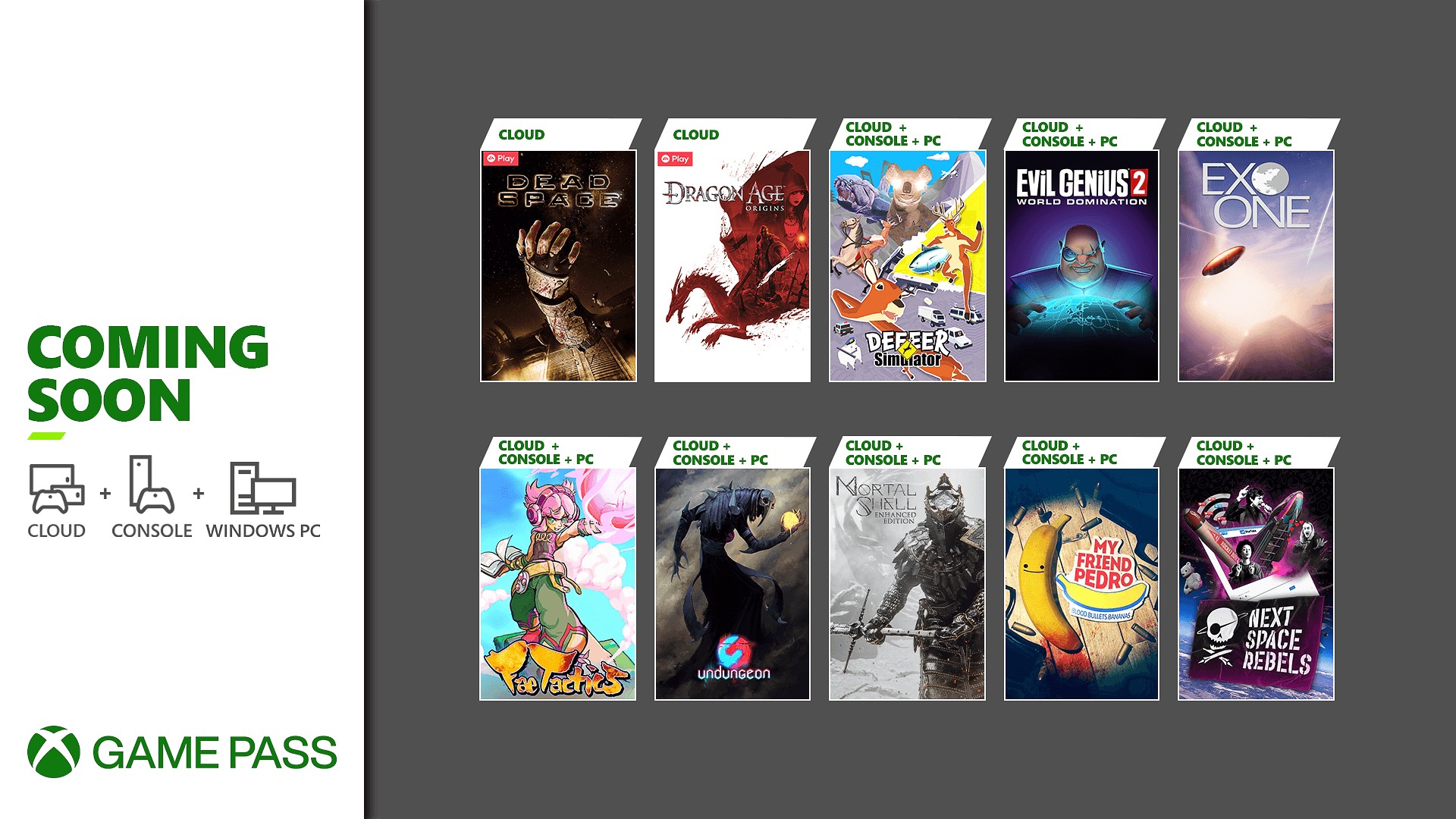 Welcome friends! There are a bunch of games coming to the library soon, including new [email protected] games. These, plus the Halo Infinite Multiplayer Beta, honestly make me feel like I need to take another look at my November gaming schedule and reprioritize. There’s a lot to cover, so let’s jump in!

Dead Space (Cloud) EA Play
When an immense mining ship, the USG Ishimura, encounters a mysterious alien artifact in a remote star system, its communications with Earth are mysteriously cut off. Engineer Isaac Clarke is sent to repair the communications array but arrives to find a living nightmare infected by an ancient alien scourge. Clarke’s mission becomes one of survival as he fights to save himself, and to return the artifact. Play Dead Space with Cloud Gaming via EA Play.

Dragon Age: Origins (Cloud) EA Play
The survival of humanity rests in the hands of those chosen by fate. You are a Grey Warden, one of the last of an ancient order of guardians who have defended the lands throughout the centuries. Betrayed by a trusted general in a critical battle, you must hunt down the traitor and bring him to justice in Dragon Age: Origins, now available with Cloud Gaming via EA Play.

Next Space Rebels (Cloud, Console, and PC) [email protected] – November 17
Available on day one with Xbox Game Pass: Order some parts online, get your camera, and grow your StarTube channel through rocket tinkering and often wacky challenges! With great fame comes great responsibility, and a sudden wrench in your path to greatness will take you on a journey towards space.

Exo One (Cloud, Console, and PC) [email protected] – November 18
Available on day one with Xbox Game Pass: A strange signal… an alien craft… Exo One is an interplanetary, gravity-defying journey through space and time. Master a truly alien traversal system and move through enigmatic and desolate landscapes in ways you’ve never experienced. Use gravity and momentum to reach colossal speeds and exhilarating heights.

Fae Tactics (Cloud, Console, and PC) [email protected] – November 18
In Fae Tactics, follow a young magic user named Peony on her journey across a vibrant world full of mystery and danger. Summon allies, cast spells, and befriend a motley crew of characters as you dive into the growing conflicts between man and magical beings known as fae.

My Friend Pedro (Cloud, Console, and PC) [email protected] – November 18
Returning to the Xbox Game Pass library, My Friend Pedro is a violent ballet about friendship, imagination, and one man’s struggle to obliterate anyone in his path at the behest of a sentient banana. The strategic use of split aiming, slow motion, and window breach create one sensational action sequence after another in an explosive battle through the violent underworld.

Undungeon (Cloud, Console, and PC) [email protected] – November 18
Available on day one with Xbox Game Pass: Travel between dimensions and change the world around you to reconstruct the existing reality. Undungeon is a gorgeous pixel art action/RPG that blends science fiction storytelling with high-paced real time combat. Build your hero as you see fit by implanting organs in their body. Choices you make will affect the fate of the Multiverse which is on the verge of destruction.

Mortal Shell (Cloud, Console, and PC) [email protected] – November 23
Mortal Shell is a deep action RPG that tests your sanity and resilience in a shattered world. Your adversaries spare no mercy, with survival demanding superior awareness, precision, and instincts. Possess lost warriors, track down hidden sanctums of the devout, and face formidable foes.

Deeeer Simulator (Cloud, Console, and PC) [email protected] – November 24
Available day one with Xbox Game Pass: Put simply, Deeeer Simulator is a “Slow-Life Town Destruction Game.” You can spend your days enjoying a nice, relaxed frolic here and there  with the other animals around town, or you can choose to relieve some stress and absolutely destroy the town and everything in it.

Evil Genius 2 (Cloud, Console, and PC) [email protected] – November 30
A satirical spy-fi Lair builder where you are the criminal mastermind! Construct your evil Lair, train your minions, defend your operations from the Forces of Justice, and achieve global domination!

What’s New in the Xbox App for PC

A lot of great new features are coming to the Xbox app for Windows PCs that are now available to test for Xbox Insiders, including enabling mods for many games and the ability to select your game install location. Join Community Lead for Xbox Game Pass Megan Spurr, and Partner Director of Experiences with Xbox Jason Beaumont, as they discuss some of the updates available to test in the Xbox app and what you can expect in the future. If you’re not already part of our Xbox Insider program, visit our Xbox Insider hub to learn more and join.

Dicey Dungeons (Cloud, Console, and PC) [email protected] – Available now
Become a giant walking dice and battle to the end of an ever-changing dungeon! In Dicey Dungeons, pick one of six different characters, each with its own distinctive playstyles and abilities. Fight monsters, find better loot, and level up your hero in this lighthearted deck-building roguelike from the creator of VVVVVV and Super Hexagon.

One Step from Eden (Cloud) [email protected] – Available now
One Step from Eden combines deck-building and real-time action with rogue-like elements, giving you the chance to carve a path of mercy or destruction. Fight alone or with a friend in co-op as you cast powerful spells on the fly, battle evolving enemies, and collect game-changing artifacts. Can you make it to Eden?

We have a huge batch of Perks for you this week…seriously. Read on for more details, and don’t forget to claim your Perks via the Perks gallery on your Xbox console, Xbox app for Windows PCs, or Xbox Game Pass mobile app.

Marvel’s Avengers – Disney+ Day Perks Pack – Available now
Grab this pack to celebrate Disney+ Day and save the world in style! Get a new outfit every hero with a Perks bundle that includes the Aerospace Outfit Set, the Black Panther Strategist outfit, plus an emote for Kate Bishop.

Ultimate members, we’ve added Xbox Touch Controls to 17 more games ready to play from the cloud today! Play over 100 touch-enabled games with cloud gaming on the Xbox app for Windows PCs, Xbox Game Pass mobile app on Android devices, or xbox.com/play on your Windows PCs and Apple phones & tablets, no controller needed. Check out the list of new games with touch controls below:

The following games are leaving soon, which means it’s time to jump back in to show some love before they go! Remember you can use your membership discount to save up to 20% on your purchase to keep them in your library.

We’re wrapping up November with a wonderful slate of games coming to the library! Reminder if your friends play on PC, they can get their first 3 months of Game Pass for PC for $1 so you’ve got a player 2! Make sure you stay plugged into @XboxGamePassPC and @XboxGamePass on Twitter for updates when these games are available to play. See you in December!