Picture this: you’ve just claimed victory in the most elite arena in all of Villedor. Hundreds of fans are roaring your name. You could be the champion. Bloody Ties—Dying Light 2 Stay Human’s first paid DLC—will give you a shot at glory. If you’re willing to take up the gauntlet, that is.

Bloody Ties will take you on an exciting journey to the heart of Villedor’s extravaganza – Carnage Hall – where you’ll fight to secure your spot in the pantheon of gladiators. But Carnage Hall is no regular arena. Only the best, strongest fighters are allowed in, so prepare for a challenge. You’ll face enemies like nothing you’ve seen before and make quite unexpected allies who might help you on your way to glory. Don’t let it consume you too much, though, because like most things in The City, this one too has its secrets. Will you uncover the darkness behind the spotlights?

To get into Carnage Hall, you’ll have to prove your skills first. Think you’re ready? Look for special tryouts around Villedor. Should they go well, you’ll gain access to the new location and epicenter for Bloody Ties. This once grand opera theater has been repurposed to suit quite a bloodier performance now, where the fiercest fighters in The City duke it out to call themselves champion. Join the Spectacles and seek out glory as you climb your way to the top.

Try Out A New Weapon

Rediscover creative combat with the Shield Glove. This brand new weapon type offers its wielder both speed and agility while maintaining deadly poise. In the arena fights, you’ll have to keep your wits about you, but having an edge over your opponent could turn the tide in your favor. Winning fights and climbing the ranking will reward you with new gear, perfectly suited for taking on your new opponents.

In Carnage Hall, you’ll have the chance to partake in the latest challenges. Looking for a complex, multi-objective arena with unique stories? Make sure to check out Spectacles. Or maybe you’d want to investigate the newest mutations in the Infected? Take them on in our Freak Shows – careful, though, they’re no joke! If you’re feeling particularly brutal, you can try the Carnage challenges, where you’ll be pitted against hordes of murderous atrocities. And for the parkour enthusiasts – this time, you’ll put on a real show.

Bloody Ties is coming to Dying Light 2 Stay Human on October 13th, 2022. Make sure to book your copy now to start off with this exclusive pre-order bonus: the Aristocrat pack, containing the Aristocrat Guard outfit and the Aristocrat itself, the fanciest weapon in Carnage Hall (according to some). 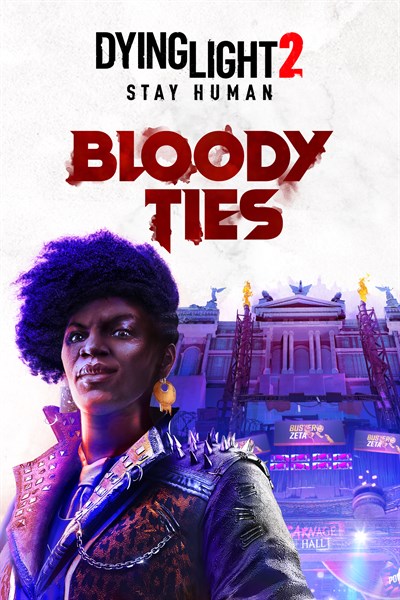 ☆☆☆☆☆ 10
★★★★★
$9.99
Pre-order
Deluxe and Ultimate Edition owners of Dying Light 2 Stay Human automatically receive Bloody Ties DLC and The Aristocrat Pack pre-order bonus. Separate purchase is not required. Pre-order now to get access to The Aristocrat pack. The Aristocrat pack contains: – Outfit: Aristocrat Guard — The most exquisite of the guard outfits. – Weapon: Aristocrat — It's a wonder the blood from its cuts is not blue. Bloody Ties is the first official story DLC for Dying Light 2 Stay Human – a thrilling first-person action survival game set in a post-apocalyptic open world. Who doesn’t want hundreds of fans chanting their name in perfect unison? Or feel like they are loved and admired while obtaining unimaginable riches at the same time? But what if to have it all, one must first pay the highest of prices? As Aiden, you are encouraged by a promise of wealth, fame, and access to the best gear to enter a tournament where people sacrifice everything just for status. Hone your skills to defeat your enemies and make allies to obtain glory. You will quickly realize that the quest for fame is just the beginning and you will find yourself involved in a plot for power and revenge. Features: NEW STORY Embark on a new adventure. Secure yourself a spot in the Pantheon of the best fighters, help your new friend Ciro in his quest to avenge his brother’s death and discover the true nature of the tournament. NEW LOCATION Enter Carnage Hall – a place filled with wealth and splendor, where every fight is a narrative spectacle and the strongest seek fortune and fame. NEW WEAPON: SHIELD GLOVE Discover a new way to play with the Shield Glove, and make creative combat even more creative. NEW GEAR Obtain new gear in the tournament where strength matters the most and weapons are a symbol of status. SPECTACLES & SHOWS Play the role of your life in Spectacles – multi-objective arena shows with unique stories narrated by Astrid herself, each resembling traditional tales and fables with a wicked twist. Test your skill in arena challenges – special trials where you’ll that fight new mutated enemies, face murderous hordes and get to perform daredevil action.

☆☆☆☆☆ 857
★★★★★
$59.99
Get it now
Upgrade your experience with Smart Delivery. Buy the game once to both play it on Xbox One and get its optimized version for Xbox Series X | S Over twenty years ago in Harran, we fought the virus—and lost. Now, we’re losing again. The City, one of the last large human settlements, is torn by conflict. Civilization has fallen back into the Dark Ages. And yet, we still have hope. You are a wanderer with the power to change the fate of The City. But your exceptional abilities come at a price. Haunted by memories you cannot decipher, you set out to learn the truth… and find yourself in a combat zone. Hone your skills, as to defeat your enemies and make allies, you’ll need both fists and wits. Unravel the dark secrets behind the wielders of power, choose sides and decide your destiny. But wherever your actions take you, there's one thing you can never forget—stay human. VAST OPEN WORLD Participate in the life of a city engulfed in a new dark era. Discover different paths and hidden passages, as you explore its multiple levels and locations. CREATIVE & BRUTAL COMBAT Take advantage of your parkour skills to tip the scales of even the most brutal encounter. Clever thinking, traps and creative weapons will be your best friends. DAY AND NIGHT CYCLE Wait for night to venture into dark hideouts of the Infected. Sunlight keeps them at bay, but once it’s gone, monsters begin the hunt, leaving their lairs free to explore. CHOICES & CONSEQUENCES Shape the future of The City with your actions and watch how it changes. Determine the balance of power by making choices in a growing conflict and forge your own experience. 2-4 PLAYER CO-OP GAMEPLAY Play in up to four-player co-op. Host your own games or join others and see how their choices have played out differently than yours.