Earlier this year, gamers got a taste of multiple Pac classics with Pac-Man Museum+. With that, fans made it clear that there was one particular Pac-Man classic they wanted to see next – Pac-Man World Re-Pac. Well, we’ve delivered and it’s available now!

Originally released in 1999, Pac-Man World: 20th Anniversary was Pac-Man’s first 3D platforming adventure, using a variety of unique abilities on a quest to rescue his kidnapped family from the dastardly Pac-imposter, Toc-Man, and the Ghosts! Pac-Man World Re-Pac brings a fresh coat of current-gen paint to Pac-Man’s athletic quest that we think existing and new fans alike will enjoy!

I spoke with the game’s producer to understand a bit more about what it took to bring Pac-Man World Re-Pac to Xbox.

Please introduce yourself and let us know a little bit about your role on the game team.

My name is Yuji Yoshii from Bandai Namco Entertainment. I am the producer of Pac-Man World Re-Pac and I am in charge of the entire production process, from planning to completion. I have been involved in the production of the Pac-Man series since Pac-Man Museum+.

Pac-Man fans have been requesting the return of Pac-Man World for quite some time, so congratulations on bringing back such a beloved game!

We are honored to have so many fans celebrate the return of Pac-Man World.

Pac-Man World Re-Pac celebrates Pac-Man’s legacy by remaking a long-requested fan favorite game. What elements from the original Pac-Man World inspired the game team when first approaching their work on the Re-Pac?

Pac-Man World was released to celebrate the 20th anniversary of Pac-Man and is the first 3D action platformer in the series. In the original (2D maze)  Pac-Man, his goal was to run away from ghosts and eat dots, but in the 3D setting of Pac-Man World,  Pac-Man is free to run around in 3D space, with techniques at his disposal like Jumping, the Butt Bounce, and the Rev Roll. We set out to revive this  Pac-Man action with modern graphics and technology.

Production started some time before the game was announced; how long was the overall production timeline and how did it feel when the title was finally revealed to the world?

We started development of this title in 2020 and the game has been in production for about two years. Our team repeatedly discussed the finished image of the remake during the planning stage, so development proceeded relatively smoothly. It has been 23 years since the release of the original version, but we have been very aware of the requests from fans for the return of Pac-Man World for so many years, so we are incredibly pleased that we are finally able to answer them.

For many fans who are not familiar with the game development process, what are the first steps when it comes to remastering a fan-favorite and what were you most excited to work on?

We believe that remakes and remasters are made possible by the passionate requests from the fans, so we carefully consider whether we can provide an original game experience that will not betray their expectations. We carefully consider this question at the beginning of the process. On the other hand, the gameplay that players demand is changing with the times. We need to consider not only whether we can recreate the original, but also whether we can update the game in a way that is in line with the times.

In Re-Pac, Pac-Man and the Ghosts are more vibrant than ever. What inspired their current look and the overall graphical style of the game as you brought it to current generation hardware?

Graphical updates were one of the major themes of Re-Pac. We made adjustments to create a more modern Pac-Man design while maintaining the comic book style that the Pac-Man universe has. Also, by carefully depicting the natural objects and buildings in each stage with the new look, we were also able to bring Ghost Island vividly back to life.

The “loop” of the original Pac-Man World featuring action-platforming mechanics with a mix of puzzle solving to reach the goal of each stage is still fun today. What makes this style of gameplay intriguing when it comes to Pac-Man?

I think the “loop” in Pac-Man World works very well with Pac-Man. It is great fun to see Pac-Man, with his round yellow body, using very fun, Pac-Man-like actions such as Butt Bounce, Rev Roll, Pac-Dot Attack, etc., and solving puzzles.

In Pac-Man World Re-Pac, when compared to the original, the enemies move a little bit differently, there are enhancements to the UI, and the levels can be approached by the player in a new way due to the widened field of view. How did you approach making these and other enhancements for Pac-Man World Re-Pac while making sure you stayed true to the feel of the original?

The original Pac-Man World gave us the butt-bounce, rev-roll, and Pac-Dot Attack abilities. Re-Pac includes these abilities and adds a new hover-jump to Pac-Man’s move set as well as the ability to become Mega Pac-Man. Can you tell us a little bit about what inspired this and your experience giving Pac-Man these new abilities?

In Re-Pac, we have added these two new elements to evolve the game into a more playable and entertaining modern action game. Hover Jump is useful for long distance jumps and adjusting your fall; eating Power Pellets will turn you into a Mega Pac-Man to attack the ghosts.

Are there any specific graphical updates that you’d like to point out?

In the factory area, burning pipes that glow red block Pac-Man’s path. We would love for you to check out how we show steam blowing out of these pipes and see the difference from the original version in the comparison trailer.

The original Pac-Man World series is known for its catchy soundtrack. Can you tell us about the process of remaking the game’s iconic musical themes? And are there any specific songs that the game team is particularly fond of?

We knew that many fans also have strong feelings about the soundtrack of Pac-Man World, so we used the original music for most of the stages and title screens. We hope that people will feel the nostalgia from both the music and the visuals. We all like the title screen music. It is a wonderful jazz-style song that is perfect for the start of the adventure that is about to begin.

Are there any fun, hidden “easter eggs” or other easy-to-miss things in the game that gamers should watch out for as they play through Ghost Island?

All stages (except “Buccaneer Beach” and each area’s boss battle stage) have the six letters “P,” “A,” “C,” “M”, “A”, and “N” that are hidden throughout them. If you collect them all, you can challenge a special bonus stage, so please try to find them!

Pac-Man has been a global icon for over 40 years. Why do you think Pac-Man resonates with so many people?

Pac-Man debuted as an arcade game in 1980 and has been enjoyed around the world for more than 40 years. I think this is because Pac-Man is a simple game that anyone can play, and the adorable shape and movements of the yellow, round-bodied Pac-Man eagerly gobbling everything up have won the hearts of many people. I think this “Pac-Man-ness” is very important for the franchise.

Pac-Man’s historical impact and continued staying power in the world of video games is undeniable. It’s great to add such a fun filled game to the pantheon of Pac-Man. Thank you for taking the time to answer our questions today!

Thank you very much! 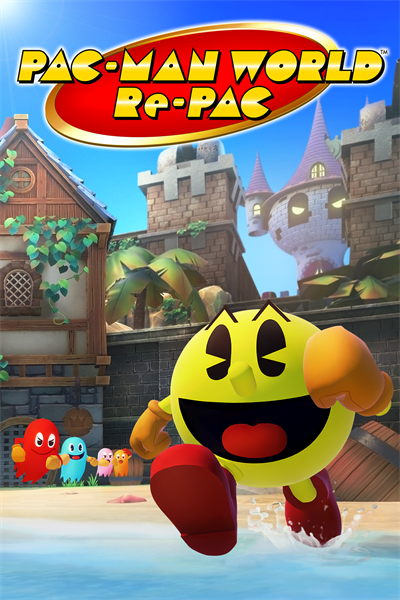 ☆☆☆☆☆ 90
★★★★★
$29.99
Get it now
PAC-MAN arrives home on his birthday to find the Ghosts have kidnapped PAC-MAN’s family and ruined his party! Off to the rescue, PAC-MAN sets out to Ghost Island! • With improved UI, fine-tuned mechanics and updated visuals, PAC-MAN WORLD Re-PAC is a modernized classic! • Dodge Ghosts, solve environmental puzzles, rescue the PAC-FAM, and more in this platforming adventure! • Butt-bounce, rev-roll, PAC-DOT attack, and hover-jump to the final face-off against TOC-MAN! • Play a collection of 3D mazes in MAZE MODE! Clear QUEST MODE to unlock the original PAC-MAN game in ORIGINAL MODE!