The first time I landed a boardslide on my skateboard was one of the most rewarding moments of my entire (yet short-lived) sporting career. I was 11, still learning how to launch myself into the air, and didn’t quite know how to even approach a rail that was about half my height. Skateboarding, in general, has a steep learning curve. But getting comfortable enough to finally ollie up onto a rail, catch it just right, slide all the way across, and then roll away is euphoric.

Playing Session: Skate Sim brought me all the way back to that first moment of stepping on a board; the controls are unlike any skateboard game I’d played before and the act of moving around required my brain to rewire itself and learn something completely new. And just like real skateboarding, it took practice but became more natural over time. I learned to push and ollie; learned the basics like shove-its and kickflips (something I was never able to do in real life); figured out how to manipulate the board to do what I wanted.

Eventually, what seemed impossible at the start – completing a full session as if I was filming an actual skate video part – became one of the most rewarding moments of my video game career. The controls became natural, and I could big spin down a staircase or switch 5-0 a hubba with relative ease.

Over the past few years, I’ve put roughly 100 hours into the game as an early access title and have picked up some tips and tricks to help anyone new feel comfortable on their board. With Session: Skate Sim officially launching today on PC, Xbox One, and Xbox Series X|S, I can’t wait to jump back in, set up a new board, and explore everything the game has to offer.

Take Your Time to Learn

As noted above, the controls aren’t like anything you’ve experienced before. Things may feel daunting at the start, but soon you’ll realize how much control you have. The game claims to be a simulator, and controlling each foot with respective joysticks sure makes it one. Find a staircase or ledge, set your marker so you can keep respawning, and put the practice in – soon the controls will come easy.

Despite the hours I’ve put in, I’m still learning every time I play. With the game offering all-new controls for transition skating and lip tricks, I see myself learning something I could never do on a real board.

Like most pro riders, it helps to figure out what tricks you like the most and master them; it will build confidence and also give you a quick out if you freeze up in the middle of a line. If there’s a trick you want to land but can’t quite figure out how to pull it off, Session: Skate Sim offers a great Trick Guide that shows you how to complete almost anything you’d want to learn.

Session: Skate Sim has built a truly immersive world with real-life spots from major cities that have been featured in skate videos spanning generations. You can skate the Pyramid Ledges in New York, FDR park in Philadelphia, or the newly-added Pier 7 at the Embarcadero in San Francisco, plus a ton more. Going beyond the spots you may recognize, the virtual world is all skateable, creating nearly unlimited possibilities to film if you’re creative enough. Speaking of…

Landing big tricks or completing runs can feel incredibly rewarding, so use the replay editor to capture the moment. With different filters and camera lens options, you can make a video part straight out of the ‘90s or use your videographer skills to create something unique – tag @actionofcreate on Twitter and you may get your clip broadcast far and wide.

Inspired by the golden age of street skating – the 1990s – Session: Skate Sim lets you experience true skateboarding and its culture. It officially launches out of Game Preview today and is available on PC, Xbox One, and Xbox Series X|S.

The standard edition of Session: Skate Sim is available on Xbox One and Xbox Series X|S here or grab the Deluxe Edition below: 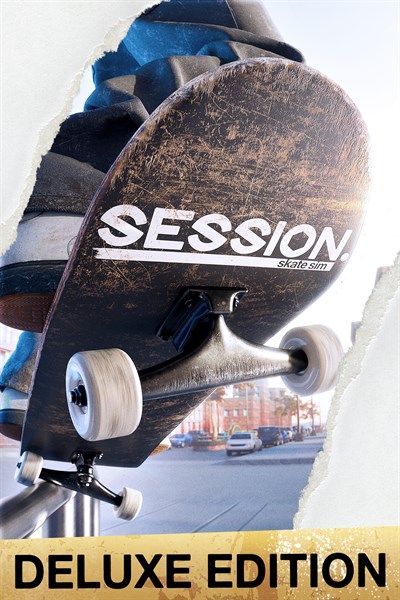 ☆☆☆☆☆ 100
★★★★★
$59.99
Get it now
The DELUXE EDITION contains: – The game SESSION: SKATE SIM – Péitruss skatepark in Luxembourg – A new training area: the Hangar – An exclusive prisoner outfit – 2 exclusive grip tapes AUTHENTIC GAMEPLAY With the dual stick controls, each stick represents one of your feet. You will need to learn how to control them and transfer weight, just like on a real skateboard. The physics have been developed with a focus on realism, smoothness and immersion. Just like in real life for a new skateboarder, the first hours can seem challenging, but once you have mastered the technique, you will feel the unrivalled thrill of pulling off your very first kickflip! Session: Skate Sim also includes full options customisation, so you can enjoy the perfect experience tailored to you. A full tutorial provides all the help you need to get started, and you can choose from four difficulty levels! THE 1990S AND SKATE CULTURE Inspired by the golden age of street skating – the 1990s – Session: Skate Sim lets you experience true skateboarding and its culture: no scoring system; just you, your spot and your imagination! There's no need for judges to tell you that your noseslide or varial heelflip are perfect for this spot. And because certain locations are iconic, the developers have added several of them to the game for you to skate in and express your creativity, including Black Hubbas (New York City), Brooklyn banks (New York City), FDR Park (Philadelphia) and many other spots. "IF IT WASN'T CAUGHT ON VIDEO, IT DIDN'T HAPPEN" Skating and pulling off the best lines in the best spots is one thing, but if no one is there to film it, it didn't really happen… In Session: Skate Sim, you can film with a 1990s filter or fisheye lens, and you can use the video editor to create your clips and share them. You can play with multiple options, including changing the field of view, time of day, filters, and different camera views (tripod, orbit, etc.). Session: Skate Sim also offers the chance to go from skater to filmmaker: pull off your moves then go into film mode to experience the action from the point of view of your camera operator and create the best clip. CUSTOMISATION Show off your style with an extensive customisation system for your skater and skateboard. By completing challenges, you earn money to spend in skate shops. You can find nearly 200 items (hoodies, shoes, caps, T-shirts, trousers, etc.) from top brands, such as Fallen, Zero, GrindKing, Thankyou, HIJINX Net, Antilanta, Roger Skate CO, No-Comply, iDabble and others. You can also customise your skateboard with over 250 parts, such as wheels, trucks and many other components from famous brands like, No-Comply, Grind King, Thankyou and many others. In addition to the design aspect, the components (trucks, riser pads, wheels…) impact the way you skate. Find the right ones for your style and shred the most iconic spots!