We hope you’re in the Ridden-slaying spirit, because Back 4 Blood’s newest expansion, River of Blood, has arrived just in time for the holiday season. The third major expansion from Turtle Rock Studios features the addition of Act 6 to the campaign story, the arrival of a new Cleaner (along with an unlikely ally), new Ridden threats and much more.

The new story mission included in the River of Blood expansion appropriately puts the Cleaners in the precarious position of traveling upriver, stopping at different points along the way to collect supplies and face new enemies. The dangerous terrain will be spread across five different maps and players can expect surprises around each turn. Those bold enough to crank up the difficulty for a challenge can certainly do so, but just don’t cry me a river if it’s too hard.

With each new Back 4 Blood expansion comes new playable Cleaner(s), and River of Blood adds Tala, a former Cultist–now outcast, with a unique perk that will surprise even the most battle-tested players. Tala is a bow-wielding ass-kicker who has escaped control imposed by the Children of the Worm and seeks to return for her brother Derek, who was introduced in the last expansion. She also has a trick up her sleeve, a friendly Tallboy companion whose name is Jeff. Jeff can be summoned by using the whistle that can be found in-game as long as Tala is on the team. Anyone can pick it up and call for him to cause ultimate mayhem. It’s always a delight to experiment with how new characters complement each other and River of Blood gives players more customization options than ever. Also included in the expansion are eight exclusive character skins, 12 exclusive weapon skins, new weapons, accessories and cards.

Lastly, I’d be remiss to not mention today’s update also includes Trial of the Worm, a new cooperative PvE mode that is free for all Back 4 Blood owners. In this new mode, players go down a four-map path while earning Supply Points and can increase the earnable amount by adding Corruption Modifiers or choosing the more vigorous paths. Ramping up the difficulty levels also boosts scores for completed runs, and there is an online leaderboard where high scores will be tracked and top players will secure all the Back 4 Blood bragging rights.

The River of Blood content is accessible for all players as long as one player in the party has purchased the expansion. River of Blood follows the events of the Children of the Worm and Tunnels of Terror expansions, which are both included in the Back 4 Blood Annual Pass, Back 4 Blood: Deluxe Edition and Back 4 Blood: Ultimate Edition.

Back 4 Blood – Expansion 3: River of Blood is available now for Xbox Series X|S and Xbox One consoles.

We hope you have fun in Fort Hope! 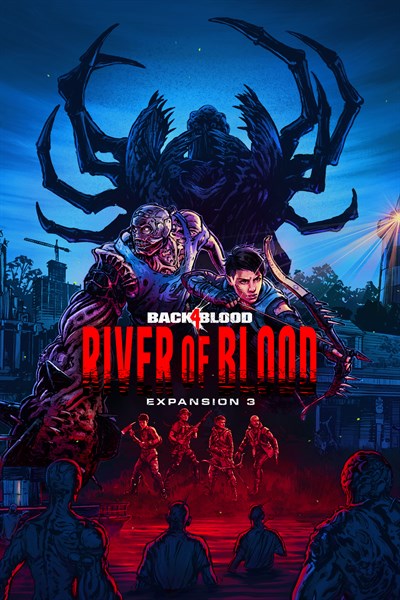 Back 4 Blood – Expansion 3: River of Blood

☆☆☆☆☆ 31
★★★★★
$14.99 $13.49
Get it now
River of Blood features a brand-new Act 6 story campaign. This enthralling five map mission has players traveling upriver, stopping at different points along the way to collect supplies and defeat new enemies. The expansion introduces “Tala,” a former Cultist Outcast now turned Cleaner. Accompanying her is her companion “Jeff,” a friendly Tallboy who is summoned when using the whistle which will spawn somewhere in the map when Tala is on the team and whistled for by Tala or other Cleaners. Jeff causes ultimate mayhem when called. River of Blood also includes eight exclusive character skins and 12 exclusive weapon skins, along with new weapons, accessories, and cards. Additionally, a brand-new Trial of the Worm mode has been added to River of Blood. Trial of the Worm is a new co-operative PvE mode free to all players, where players choose their path down a four map chain while earning points along the way. Players can add Corruption Modifiers and vote for their next map to boost points at the cost of increasing difficulty. Players have the challenge of completing all four maps to earn spots on leaderboards for glory.

☆☆☆☆☆ 662
★★★★★
$59.99 $47.99
Get it now
Xbox One X Enhanced
PC Game Pass
Xbox Game Pass
Back 4 Blood is a thrilling cooperative first-person shooter from the creators of the critically acclaimed Left 4 Dead franchise. You are at the center of a war against the Ridden. These once-human hosts of a deadly parasite have turned into terrifying creatures bent on devouring what remains of civilization. With humanity's extinction on the line, it's up to you and your friends to take the fight to the enemy, eradicate the Ridden, and reclaim the world. Cooperative Campaign Fight your way through a dynamic, perilous world in a 4-player co-op story campaign where you must work together to survive increasingly challenging missions. Play with up to 3 of your friends online or go solo and lead your team in battle. Choose from 8 customizable Cleaners, one of the immune survivors, and a range of lethal weapons and items. Strategize against an ever-evolving enemy bent on your total destruction. Competitive Multiplayer Play with or against friends in PVP. Switch between playing as a Cleaner with special perks and the horrific Ridden. Both sides come with unique weapons, abilities, and specialties. Extreme Replayability A new "rogue-lite" Card System creates different experiences each and every time, putting you in control to craft custom decks, roll different builds and undertake more demanding fights. The Game Director is constantly adjusting to player actions, ensuring exciting fights, extreme gameplay diversity, and tougher legions of Ridden – including mutated boss types up to 20 feet tall.