Dani Rojas is diving into a surreal new adventure in Lost Between Worlds, a new expansion for Far Cry 6 that arrives today on Xbox Series X|S and Xbox One. Transported to an otherworldly dimension after an ill-fated run-in with an extraterrestrial artificial intelligence, you must fight your way through a series of connected rifts, each a twisted slice of Yara. In one rift, giant concrete walls slide in and out of place as you navigate a massive labyrinth, while in another, you must traverse an eerie marshland while sneaking or shooting your way past the invisible crystalline enemies that stalk you. Active volcanoes, submerged cities, and more diverse and unexpected challenges await amidst the rifts, and all the while Dani Rojas will have to contend with the sardonic A.I. that helped get them into the mess (and is your only hope to get out).

As you make your way through the rifts, you must choose your path in order to unlock the five shards standing between you and escape. Each run is different, not just because you are choosing different paths, but because you can unlock new gadgets that allow you to seek out shortcuts and upgrades. If you manage to triumph and return to Yara, you’ll bring powerful gear to aid you in your fight against Antón Castillo (or perhaps in your New Game+ playthrough, a mode recently added in a free update).

Grab the Lost Between Worlds expansion now from the Microsoft Store (full Far Cry 6 game required to play) or pick up the Upgrade Pass, which includes the Lost Between Worlds expansion and the Season Pass (with three play-as-villain DLCs, Far Cry 3 Blood Dragon Classic Edition, and three gear packs). Or take advantage of holiday season sales and get a discount on the complete package, the Far Cry 6 Game of the Year Edition, which includes the full game, the expansion, and the Upgrade Pass.

If you’ve never played Far Cry 6 and want to experience the life of a guerrilla fighter on the beautiful tropical island of Yara, there is a free trial available now in the Microsoft Store (and your progress will carry over if you decide to purchase the game).

Take on an outlandish and astonishing new challenge in the Lost Between Worlds expansion today, and see what surprises await! 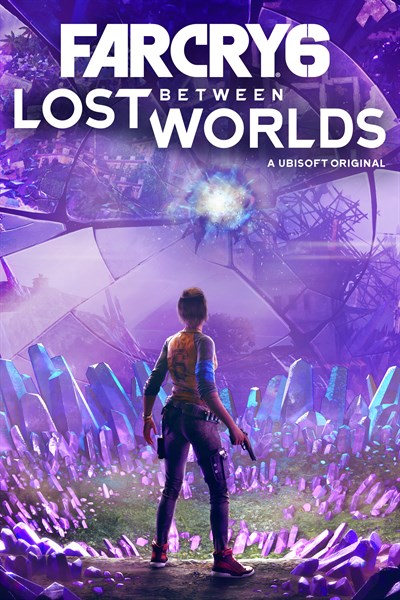 ☆☆☆☆☆ 49
★★★★★
$19.99 $9.99
Get it now
Lost Between Worlds Expansion is single player only After exploring a strange meteorite impact site, legendary guerrilla Dani Rojas is ripped from Earth and trapped in a supernatural prison – a distorted version of Yara. To escape, Dani must make their way through a gauntlet of fractured trials to collect the five broken shards needed to repair the vessel. Storm a fractured fortress floating in the sky, swim through an underwater Esperanza filled with deadly traps, scramble down an active volcano, fend off the darkness in a blackout cave, and much more. With some calling for stealth and navigation while others require speed and force, no two Rifts are alike. Forge an unlikely friendship with Fai, your condescending but strangely endearing guide, as you take on enemies including Shardfaces, the color-coded crystalline guardians of the Rifts. To defeat them, you’ll use Chromatic Combat, switching between red and blue ammo on the fly. With every shard you collect, you get powerful gear, weapon upgrades, and tools to help you forge custom shortcuts throughout the map. Upon completion of the expansion, you’ll return to Yara with the most powerful gear in Far Cry® 6 – Fai gear. This game leverages Smart Delivery allowing access to both the Xbox One title and the Xbox Series X|S title.

☆☆☆☆☆ 597
★★★★★
$59.99
Get it now
Free Trial
Welcome to Yara, a tropical paradise frozen in time. As the dictator of Yara, Antón Castillo is intent on restoring his nation to its former glory by any means necessary, with his son, Diego, following in his bloody footsteps. Their oppressive rule has ignited a revolution. – Play as Dani Rojas, a local Yaran, as you fight alongside a modern-day guerrilla revolution to liberate Yara. Play the full game solo or with a friend in co-op. – Explore jungles, beaches, and cities on foot, horseback, or in a wide variety of vehicles including boats and Jet Skis as you fight against Castillo’s regime in the most expansive Far Cry to date. – Feel the thrill of combat with an arsenal of hundreds of weapons alongside helpful amigos like Chorizo the dog and Guapo the gator. – Enjoy all-new content and features added since launch, including four new special operations, free blockbuster crossover missions, and fan-requested updates such as New Game Plus, Completionist Aid, an extra-hard difficulty mode, and four new loadout slots. There has never been a better time to join millions of players in Yara! This game leverages Smart Delivery allowing access to both the Xbox One title and the Xbox Series X|S title.