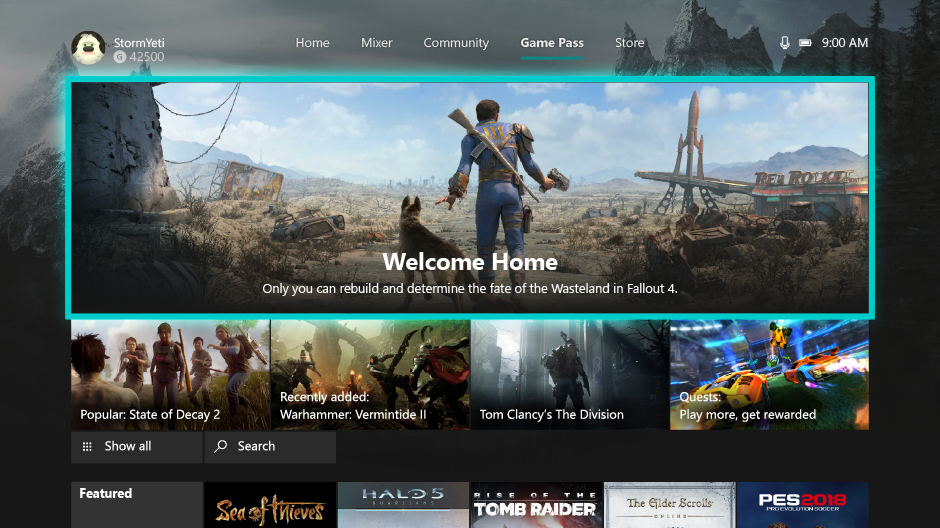 Just over a year ago, we launched Xbox Game Pass, a new membership that gives gamers the ultimate value and freedom to play over 100 great games for one low monthly price. Over the last year, we’ve achieved several important milestones based on feedback from our fans. We expanded the service to support 40 markets across the globe. We also announced in January that going forward, we plan to release all new Xbox games from Microsoft Studios into Xbox Game Pass the same day as their global launch. We followed that up by releasing Sea of Thieves and State of Decay 2 into Xbox Game Pass on the same day of their global release, and announced at E3 that upcoming new titles from Microsoft Studios such as Forza Horizon 4, Gears of War 5, and Crackdown 3 will follow suit. We added more AAA blockbuster titles such as Fallout 4, Tom Clancy’s The Division, The Elder Scrolls Online: Tamriel Unlimited, Rocket League, as well as new games from independent developers to Xbox Game Pass.

As a result of this progress, our top feedback from fans is that now they want a faster way to get to Xbox Game Pass and easier ways to discover games available in the catalog. Based on this, we started testing a new Xbox Game Pass tab on the Xbox One Home with a subset of Xbox Insiders in June. Due to overwhelmingly positive feedback from our Insider community, we are excited to announce that we are releasing the all-new Game Pass tab worldwide to the entire Xbox community today. This new tab makes Xbox Game Pass even more discoverable to new members and will help our current members check out what’s new every time they turn on their console. It also up-levels popular titles in the catalog, highlights newly-added games, spotlights the latest deals on games and DLC for members, and recommends games based on your interests so that you can easily find your next favorite game.

With this update, you may also notice the Entertainment tab has been removed from the Xbox One dashboard. While proving the best in entertainment remains important to Xbox, you will be able to find entertainment content in the Store tab and further in the Microsoft Movies & TV and Apps Category tabs. These will continue to showcase the latest and greatest in trending and popular movies, TV and music across our Microsoft service, as well as our many 3P Partners. Additionally, we will continue to evaluate ways to make it easy for you to access your favorite movies, TV shows, music and apps going forward.

We’re excited to make Xbox Game Pass even easier to access on Xbox One based on your feedback. Discover the world of Xbox Game Pass, now just a tab away!