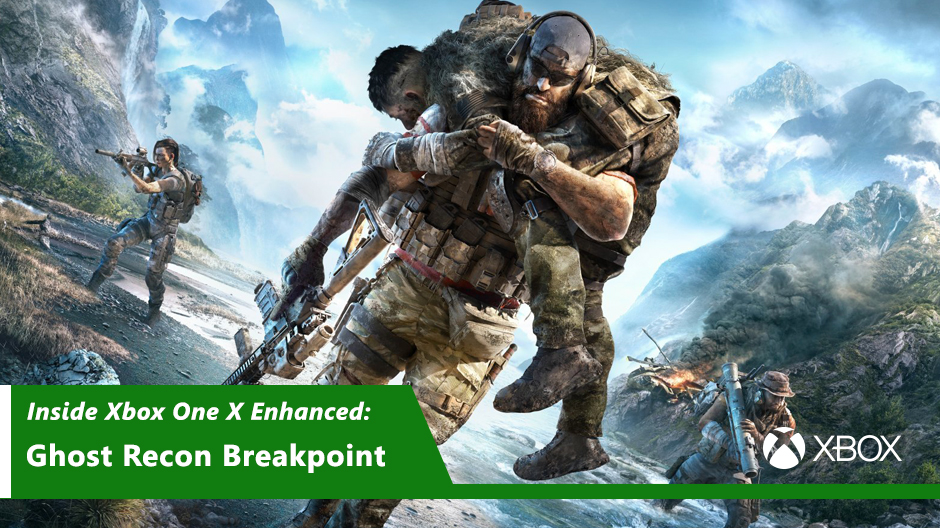 Ghost Recon Breakpoint’s open world of Auroa is huge, diverse, and bursting with rich natural detail. Whether they opt to see Auroa in 4K or 1080p, higher resolution or increased graphical fidelity, Xbox One X ensures that console players get the best experience possible as they evade deadly drones and hunt rogue operators across muddy jungles and snowy peaks. In our Inside Xbox One X Enhanced series, creators share the behind-the-scenes accounts of the work involved in enhancing these epic games for Xbox One X, how they’ve helped chart the course of the world’s most powerful console, and what that means for the future of gaming. Today, we’ll be chatting with Ghost Recon Breakpoint Lead 3E Programmer François Queinnec about how the game is enhanced for Xbox One X.

What specifically has your development team done to enhance Ghost Recon Breakpoint for Xbox One X?

On Xbox One X, we offer two separate graphics modes to the players. The first mode lets them favor resolution over graphics fidelity, achieving the highest resolution rendering for the crispest image. The second mode favors graphical fidelity, with the game rendered in a lower resolution, but with higher quality settings, including more grass and foliage and better lighting. The image is then upscaled to get a very sharp result.

Ghost Recon Breakpoint is all about giving players the freedom of choice to experience the game the way they want. Giving players on Xbox One X the option to choose how the game looks is definitely part of this, and we hope players will appreciate it!

The Xbox One X allowed us to push the quality close to what only high-end PC players usually see. It also allows us to develop features such as enhanced foliage or lighting. For example, players on Xbox One X will be able to be immersed in high-quality foliage such as deep, thick jungles, tall grass, and flowery fields, all reacting in real time to the wind and the weather.

How do you expect fans of Ghost Recon Breakpoint will respond to seeing/playing it on Xbox One X with these enhancements?

We expect that Xbox One X players, whether they’re playing on a Full HD or 4K screen, will enjoy the extremely detailed graphics and the smooth framerate this console offers, and really have the ultimate Ghost Recon Breakpoint experience.

We went beyond what our previous game offered on the Xbox One X, and really used this console as the quality benchmark for all our tech. We specially designed two different modes to allow people to benefit from either higher-resolution displays, or choose to enhance all graphical features. Many effects that are usually only able to be maxed out on powerful PCs could be set at maximum settings in this mode, offering what we believe the best possible console experience.

What enhancement were you most excited about to explore leveraging for Ghost Recon Breakpoint on Xbox One X?

The Xbox One X allowed us to push our new GPU Grass System and our new Interactive Global Illumination to reach some amazing results. Improved lighting also means enhanced godrays piercing through volumetric clouds and fog, giving the most realistic feeling we could to the game.

What do 4K and HDR mean for your game?

We always strive to provide the best experience possible to our players, and offering different graphics modes and HDR are the main ways we wanted to do that on Xbox One X. We’re really excited to see the reaction of the players!