Our newest We Were Here game is coming to Xbox One on June 5! To everyone who isn’t familiar with our games, last year we released both We Were Here and We Were Here Too. They’re cooperative first-person puzzle adventures where your primary tools are two walkie-talkies. You and your partner will be challenged to work together on the same wavelength in order to escape the sinister Castle Rock. We Were Here Together brings more co-op puzzle solving, and there’s more! If you haven’t had a chance to play our earlier games, don’t worry – We Were Here Together is a complete experience in itself. Think of it like a TV series where the episodes are individual stories, but also tie together in the longer term.

The first two games saw players split up inside Castle Rock – a mysterious medieval castle in the wastes of Antarctica. You might occasionally see the other player from a balcony or on the other side of bars, but often your only direct interaction would be speaking via walkie-talkie. For We Were Here Together we figured that it was time to change things up, and so you start out playing alongside your partner in the same areas. This means you can explore side by side if you like. We’ll give you a hint though… you’ll definitely need to split up in order to solve the puzzles! Still, it’s a more cozy introduction than you got in previous We Were Here games – and you know something else which is more cozy? The base camp where you start your adventure!

The expedition base camp is a huge contrast to the sinister castle beginning of the earlier We Were Here games. In We Were Here Together we really wanted to expand the world, and let players explore beyond the halls of Castle Rock. It’s this warm, well lit space which opens out to a pretty Antarctic scene with a seafront view. We hope to give players the sense of going on a journey as the atmosphere changes the closer they get to Castle Rock – there’s still beauty in the icy, snowy outdoor scenes, but things get darker and more threatening as the explorers progress. For the people who will be making their third visit to Castle Rock, don’t be complacent – expect the unexpected…

We introduced new areas into Castle Rock itself as well. For instance, the new monastery greenhouses have a very different aesthetic to the castle areas players have visited in previous games. The plants and large windows make the spaces feel more alive and less constricting, but this probably doesn’t prevent some underlying sense of dread. Castle Rock is not a welcoming place, after all… and the other people you might meet inside don’t want to be there any more than you do. You’ll discover their reasons via another new We Were Here Together feature: cutscenes!

We introduced cutscenes into the game to give us another way of sharing even more story with players. The addition of cutscenes doesn’t mean that We Were Here Together is abandoning the environmental storytelling and atmosphere of earlier games! While the cutscenes help establish motivations for characters and focus the plot, perceptive players will learn a lot about the world of We Were Here as they look around.

We can’t wait to see what you think of We Were Here Together! As a thank you in advance for all the support we have been given with our earlier games, we have made sure to set up a pre-order including a 10% discount! 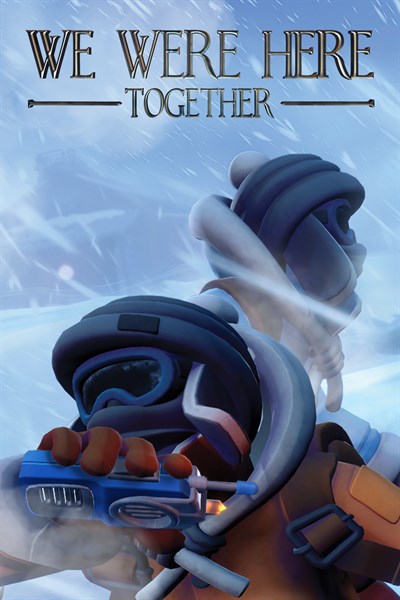 We Were Here Together

☆☆☆☆☆ 52
★★★★★
$12.99 $6.49
Get it now
Embark on a puzzle solving adventure in which you and a partner must prove you can communicate and work together to escape the haunted Castle Rock. It all begins with an emergency flare lighting up the sky and a distress call waking you from uneasy dreams. Your fellow Antarctic explorers are in trouble, and the two of you left at base camp must work together to launch a rescue mission. If only you knew what you were getting into… From the research base camp you’ll need to figure out a way to get to the source of the distress flare. Once you’re through the frozen Antarctic wastes, you'll find yourselves separated inside a medieval castle, facing puzzles, secrets, and dangers! You and your partner start out with nothing but your wits and a walkie-talkie each. Observation, smart communication and teamwork will be the only way to escape from the sinister Castle Rock. Your voice will have to lead the way. You and your expedition partner must traverse the Antarctic wasteland and infiltrate a sinister medieval castle. All you start with is a pair of walkie-talkies – will you be able to work together on the same wavelength? Two minds will have to think alike. Immerse yourself in an intriguing cooperative experience as you and your partner puzzle your way through a series of thrilling situations. Discover brand new environments and mysteries, together. We were not alone… Darkness has engulfed the once magnificent Castle Rock and its surroundings. Can you discover the truth behind the grim fate of the fallen citadel and make it out alive… or will the original inhabitants catch you on your way out? PLAY MORE WE WERE HERE GAMES! If you enjoy We Were Here Together, don’t forget to check out the earlier entries: We Were Here and We Were Here Too.