Look, we get it. You’re a pro hospital administrator. You can whip a healthcare institution into shape at a moment’s notice. Queues of people line up in an orderly fashion to be seen by your top docs, who successfully diagnose them in mere seconds before sending them for successful cures.

You, my friend, are a tippity-top, total heathcare hero. You’re a champ. You’re the best in the biz. You’re certainly better than the administrator described in our last Xbox Wire article.

But have you considered aliens?

You know, aliens. The grey things? The ones with the eyes? The ones that are pouring through your hospital doors as we speak? Oh, my sweet summer child. If you haven’t dealt with aliens, you haven’t seen the half of it.

And what about your hospitals out in the sticks? Do you have an ecological vibe on the go? Are you planting carrots, for goodness sake? Are you successfully monitoring power use? Are you dealing with the political ambitions of an ecological megalomaniac? Or are you just consuming power & chucking out CO2 to your heart’s content? And I thought you were a doctor. A champ.

Well, OK then. As you wish.

First up, let’s delve into the world of Close Encounters. Harrison Wolf, Two Point County’s intrepid local DJ, has thoughts. Thoughts of a conspiracy that is wrapping itself around the town of Goldpan. This town has recently seen a fireball streaking above its sandy climes, and not everyone thinks it’s a natural phenomenon. No, you see, Harrison thinks it’s aliens.

But it goes deeper. So much deeper. What if the town of Goldpan was just a façade? What if, deeper behind the scenes, somewhere behind a murky curtain, there was a military base, teeming with aliens? What if they are already here, walking among us? What if you, for some reason, have to build a hospital here?

My goodness. What if?

Slip across the map of Two Point County, though, and you’ll find yourself somewhere different entirely. The sand dunes part and are replaced by a lush and verdant landscape of trees, and oxygen and, blimey, hope! This is the setting of the Off the Grid expansion.

Hope, you see, because the local politician, Tabitha Windsock, has a dream. A dream that’s green. A green dream. She’s building an eco-city with her name on it, and she needs your help to cure the people in her constituency so that they can remain healthy, keep voting for her, and, of course, keep paying taxes.

You’ll encounter wild ailments like Hare Brained, Root Snoot and Bodily Druids, as well as the troubling-sounding Flappy Hamper, in your quest to cure the county.

But it doesn’t end there, because the Jumbo Edition also includes earlier DLCs like Bigfoot (help an eccentric billionaire who just so happens to be a Yeti manage his snowy healthcare resort / castle), and Pebberley Island (help explorer Wiggy Silverbottom blaze a sterilized trail through the tropics in a quest for the fountain of eternal life).

Not only that, but if you’re like me, someone who likes to place lamps and rugs down at arbitrary angles for hours on end to please your patients, you’ll get a real kick out of the two included item packs – the Retro Items Pack and the Exhibition Items Pack.

Retro brings to the fore some mighty props of yesteryear, like pinball machines, ducks to hang on your wall, old televisions, gramophones and more. I love placing them all down in my staff rooms! Not only that, but you’ll get an interactive photo booth, an emu ride and more.

The Exhibition Items Pack is an exploration of the nuance of sculptural art. Take in such seminal works as “keys on a podium,” and a large pig. Place an orrery down in your lobby and become transfixed by the motion of the celestial bodies. You know what? Just stick a whole flippin’ dinosaur skeleton in your lobby while you’re at it.

We know you’re going to have a blast with this stuff and can’t wait for you to get stuck in! Please check out the Two Point Hospital: Jumbo Edition today on the Xbox Store and tell all your friends. Or else we’ll send the aliens after you. 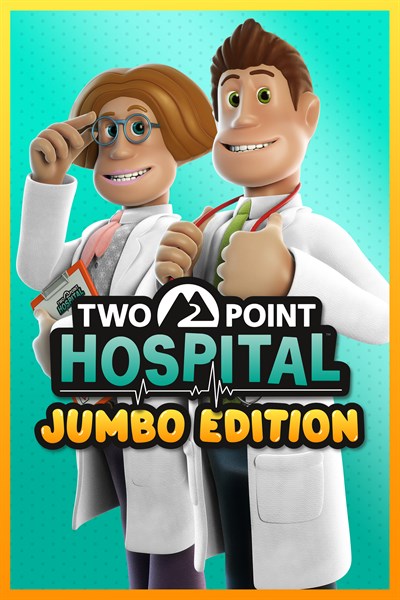 ☆☆☆☆☆ 2
★★★★★
$39.99 $31.99
Get it now
With over 3 million happy players, find out why Two Point Hospital is a healthcare phenomenon! Take your hospital-building business experience to the next level, with four huge expansions and two additional DLCs, all bundled into an extraordinary Jumbo Edition that's bursting at the seams with LOADS OF STUFF! The best-value bundle yet! Jam-packed with new content that new and old players alike will love! Includes the base game + four premium expansions + two item packs. Traverse the vast reaches of Two Point County, with 27 hospitals in a variety of areas – from the snowy lands of the Bigfoot DLC, to the tropical climes of Pebberley Island. Includes over 189 bizarre illnesses, a huge array of cure machines bursting with personality, and loads and loads of items to place in your hospitals! Includes: Bigfoot, Pebberley Island, Close Encounters and Off the Grid full expansions, plus the Retro Items Pack and Exhibition Items Pack. About Two Point Hospital Build, cure and improve! Design and build your own hospital! Build up a hospital from nothing to a masterpiece as you design the most beautiful – or functional – healthcare operation in the whole of Two Point County. Optimise your hospital design to increase patient (and cash) flow, arranging corridors, rooms and waiting areas to your exact specifications. Expand your hospital to multiple buildings as you look to get as many patients through the door as possible. Place decorative and functional items around your hospital to improve its prestige, lower patient boredom, increase happiness and keep those end of year awards flowing in. Cure unusual illnesses! Don’t expect Two Point County to be populated with your usual types of patients. In this world, you’ll experience all kinds of unusual illnesses; from Light-headedness to Cubism – each requiring their very own special type of treatment machine. Diagnose illnesses, build the right rooms to handle them, hire the right staff, and then get ready, because curing just one of these illnesses is just the beginning. Once you’ve conquered an illness, research improved cures and machines and turn your hospital into an unstoppable healthcare juggernaut. Your first hospital is where it begins, but what next? 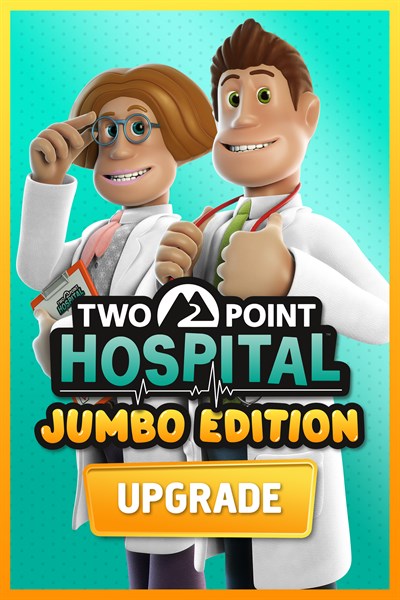 ☆☆☆☆☆ 1
★★★★★
$19.99 $15.99
Get it now
Upgrade your version of Two Point Hospital to the JUMBO Edition and bag yourself loads of new Two Point Hospital goodness! For the first time on console, wade into a huge selection of fan-favourite Two Point Hospital content in the JUMBO Edition Upgrade and extend your experience to new areas of Two Point County. As well as new hospitals, you’ll face whole new illnesses (each more ridiculous than the last!), and of course, the unusual cure machines to match – as well as a selection of new gameplay challenges along the way. Included in the JUMBO Edition Upgrade: – Two Point Hospital: Close Encounters DLC Take on the mysteries of the towns surrounding Chasm 24, a secret military base that some suspect may be more than meets the eye! Includes 3 new hospitals, 11 new visual illnesses (34 new illnesses in total), new gameplay, new music, new DJ/tannoy lines and a whole bunch of new placeable items. – Two Point Hospital: Off the Grid DLC Go into the wild! Tabitha Windsock, Two Point County’s ever-present mayor, has put rivers and forests back on the map. She’s got morals, integrity and, above all else, a cloying desperation to stay in office. Adds another 3 hospitals, 35 new illnesses, and bags of new items as well as new music, DJ lines and tannoy announcer lines. – The Retro Items Pack Turn back the clock with this delightful collection of 26 new retro and vintage items to place in your hospitals (the more flamboyant sitters will find themselves at home with the Peacock Chair!) – The Exhibition Items Pack 30 new items to place in your hospital ranging from the sublime to the ridiculous. Or, actually, on closer inspection, the ridiculous to the ridiculous. From placeable wall art to entire fossilised dinosaurs, there’s sure to be something for everyone. Two Point Hospital: JUMBO Edition Upgrade – More hospitals, more cures, more fun!