Get ready to put on your hard hats, grab your tools, and to start construction. You’ll be able to embark on an epic journey and become the Master Builder, as Dragon Quest Builders 2 is coming to Xbox One, Xbox Series X|S (via backward compatibility), and Windows 10 PC and Xbox Game Pass (Console, Cloud, and PC) on May 4!

At the start, you’ll take on the role of a young apprentice builder who washes up on the Isle of Awakening. There you encounter the spirited Malroth, a mysterious youth with no memory of his past, who joins you as friend and bodyguard.

Together, you’ll explore vast islands full of resources to gather and monsters to battle. You’ll help townsfolk, develop your skills to become a Master Builder, and take on the Children of Hargon – a dangerous cult that celebrates destruction.

You’ll take on the role of a builder, one of those rare individuals who have the power to create and construct. You’ll explore multiple islands, build a community, take on requests from townsfolk, construct buildings and farms, and battle Dragon Quest series monsters.

…or you could ignore all that responsibility and make yourself a small city or something else instead. It’s entirely up to you!

Don’t let the name fool you, despite the 2, the game has a new story that’s a great entry point for newcomers to the series. That said, if you’re a Dragon Quest veteran, you may notice more than a few connections to other games in the series.

There’s also the ability to design and build with friends online! Up to four players can team-up online to build anything you can imagine on the sandbox Isle of Awakening. And yes, this version will include the Hotto Stuff Pack, Modernist Pack, Aquarium Pack, Designer’s Sunglasses, Historic Headwear, Dragonlord’s Throne, and more!

Also, as an Xbox Play Anywhere title, you can play Dragon Quest Builders 2 on Xbox and PC with shared saved progress and achievements.

We’re thrilled to welcome you to the Isle of Awakening and excited to see you all on May 4! 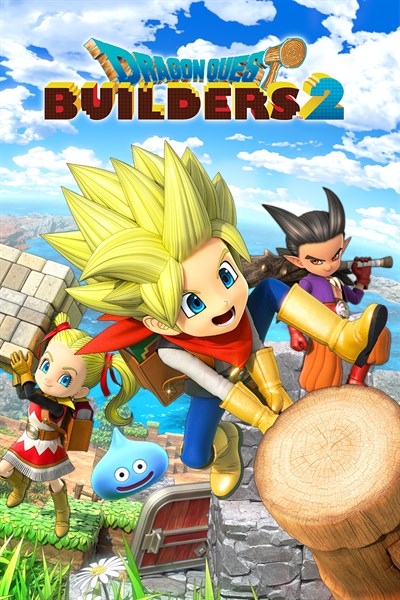 ☆☆☆☆☆ 184
★★★★★
$49.99 $39.99
Get it now
PC Game Pass
Xbox Game Pass
DRAGON QUEST BUILDERS™ 2 is the critically acclaimed block-building RPG from DRAGON QUEST series creators Yuji Horii, character designer Akira Toriyama and composer Koichi Sugiyama. Embark on an epic journey and become the master Builder! Customize your character and set off to revive a forsaken world alongside a mysterious companion named Malroth. Then, take your builder online and join your friends to collaborate and create something truly magnificent. Don’t let the name fool you, despite the 2, this is a completely standalone experience featuring new characters, an expansive world, unlimited building combinations, and a storyline that’s sure to satisfy long-time fans and newcomers alike! This version includes: Hotto Stuff Pack, Modernist Pack, Aquarium Pack, Designer’s Sunglasses, Historic Headwear, Dragonlord’s Throne, and more! STORY The evil Children of Hargon are determined to eradicate all creators and have outlawed the building, cooking, and creation of all things. To spread their destructive dogma, the calamitous cult captures the builders of the world. All hope seems to be lost until you, a young apprentice builder, manage to escape from the clutches of evil. After washing up on the shores of the deserted Isle of Awakening, you encounter the spirited Malroth, a mysterious youth with no memory of his past. With the help of your fearless new friend, you embark on a grand adventure to gather the skills required to become a full-fledged builder, but the road you build is paved with peril. Only you can defeat the Children of Hargon, uncover the secrets of Malroth’s past, and unravel the riddles of this mysterious land.