Hello everybody, Daniel Moregård here from Paradox Interactive to offer some tips for navigating the latest update for Stellaris: Console Edition – 2.2 “Le Guin”. Stellaris: Console Edition is the first grand strategy game on consoles and it’s free to play this weekend! As such, you might be thinking, what’s a grand strategy game? What is Stellaris? What is the meaning of life?? Who am I?!?

It’s okay – you’re reading a blog post and it’s here to help with at least some of those questions.

“Grand strategy” is a genre of games where players control a nation/government/empire over hundreds of in-game years and influence its success (or failure) through military, economic, political, and diplomatic means. Stellaris is a grand strategy game set in a massive space sandbox. Sure, starting your own space empire can seem like a daunting task, so we’ve pulled together some quick tips and tricks to help you get started. Soon you’ll be up and running faster than light.

Try out your first playthrough as the United Nations of Earth, which represents all humans on Earth and offers a slightly more diplomacy-oriented playstyle. Space is huge, and it’s dangerous to go alone, so make sure to build alliances! You’re always stronger with fellow empires to back you up.

Sleep with one eye open

While having alliances has all sorts of benefits, the galaxy is vast and full of wonders… but some of those wonders will try to kill you. Make sure your empire is not stretched so thin that you can’t defend it when the time comes.

Look before you leap

When exploring the galaxy, it’s important to know what exists outside your own system. Science ships will allow you to explore new systems before you expand there. We recommend building two so you can explore faster. Once you decide to expand, you’ll need Construction ships to build outposts. Should there be habitable planets, Colony ships can begin populating them with your citizens. Congratulations, you’re a space colonist now.

You build and expand your empire with base resources produced on your planetary districts such as Energy, Minerals, and Food. Ensure you’re utilizing them effectively. However, for advanced resources such as Alloys, Consumer Goods, Research, and Amenities, you’ll need to construct buildings to produce them.

All your starbases are belong to you

Your empire travels by ship, so in order to extend your reach, you’ll need to construct shipyards that produce ships. As you grow, you can build more shipyards by upgrading your starbases. Building starbases and shipyards creates other advantages: starbase buildings and modules can also provide bonuses to your empire, so select what to build carefully.

The game shows you your empire’s capacity for Starbases, Navy, and Administration but these are not hard limits. If you deem it necessary, you are free to go over them. That said, going over your capacity will result in penalties to upkeep and income.

Keep an eye on your resources! Running out of resources will decrease your income by  -25%. If you need to cover yourself while you’re using a lot of resources, you can buy more on the market to get rid of negative modifiers.

Space is full of key travel lanes that allow ships to travel between systems, so position your outposts carefully. Place defensive starbases on choke points to maintain more territory with less firepower.

Size up your opponent

Before you open fire on another empire, it’s important to check your enemy’s fleet strength! The diplomacy screen is a good place to check – it shows your relative combat strength. Avoid engaging empires that are too powerful! 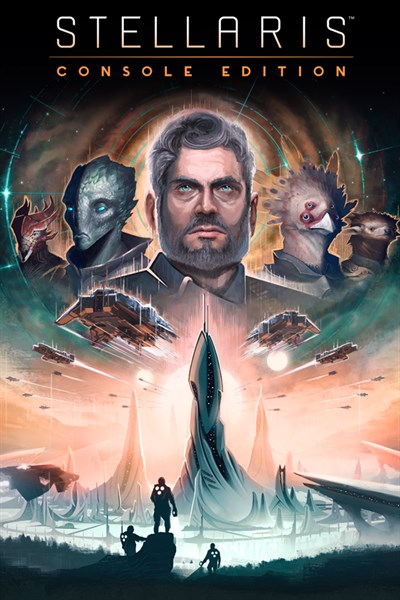 ☆☆☆☆☆ 360
★★★★★
$39.99 $31.99
Get it now
Xbox Game Pass
The universe is getting bigger every day! Paradox Development Studio is bringing the grand strategy genre to consoles for the first time ever with Stellaris: Console Edition. Featuring the same deep strategic gameplay, rich and diverse alien races and emergent storytelling, Stellaris: Console Edition puts the complexity of the galaxy at your thumbsticks. Whether you’re exploring the unknown, discovering the mysteries of the universe, or conquering it for the glory of your empire, console players have more inter-galactic strategy awaiting them than ever before. The universe has arrived at your consoles, it’s up to you what to do with it. MAIN FEATURES – Behold the enormity of space with procedurally generated galaxies with an untold number of planets to explore. – Encounter a myriad of wild, wacky, and dangerous alien races who may prove to be crucial trade partners or conquering forces hellbent on enslaving your civilization. – Take on strategic space warfare and resource management to ensure the survival and advancement of your empire. – Explore scientific anomalies and uncover technological wonders throughout the galaxy to mercilessly utilize them toward your own gains. – Govern your own fledgling population and secure your power and agenda through manipulating internal policies, factions, traditions and more.