We’ve all been there before: sitting on the couch with family or with friends watching “Jeopardy!,” responding (or excitedly yelling) out to Alex Trebek as he reads the episode categories and clues aloud. And If you’re anything like me, you’re secretly keeping score against everyone in the room. And in that moment, it feels like you’re on the actual gameshow set with Alex, competing with the other contestants.

Jeopardy! PlayShow is just that. Actual “Jeopardy!” episodes stream onto your console or PC and provide the gameplay. Your mobile device acts as your buzzer, and after buzzing in, you simply speak, and speech recognition takes care of the rest. If you’re correct, your score increases. It’s like you’re right behind the podium. I believe it’s the most immersive way to test your reaction speed and Jeopardy! skills against friends, family, and our top contestants like Ken Jennings.

During our development phase, we wanted to represent Jeopardy! as accurately as we could and pay homage to everything the show has provided to millions of fans worldwide. And to get everything just right, this meant multiple visits to the Jeopardy! TV set where they shoot, recording sessions with The Clue Crew, and Alex himself, as well as learning the quiz show’s official rules inside and out.

On top of making sure we perfected more than just the spirit of the TV quiz show, we wanted our game to feel brand new and fresh. We spent quite some time shaping the concept and the tech behind the game. It’s a unique mix of streaming video, voice recognition, and the seamless connection between a mobile device to your console.

We wanted anyone to be able to join in, so it was important for us to make our game as accessible as possible without needing extra controllers. Up to three players can join in by syncing their smartphone or tablet, giving each player their own personal voice-activated buzzer and their own opportunity to speak their response. Not only that, but this gives all players the chance to place wagers and complete Daily Doubles and Final Jeopardy in full immersion.

To tie it all together, we’ve carefully curated over 35 years of episodes spanning different eras and tournaments of “Jeopardy!” history — such as Teen Tournament and Tournament of Champions — putting endless hours of quick-speed trivia at your fingertips.

So, contestants, are you ready? Jeopardy! PlayShow is out now on Xbox One and Windows 10 PC as an Xbox Play Anywhere title. If you want to know more, please visit our site here: www.playshowtv.com 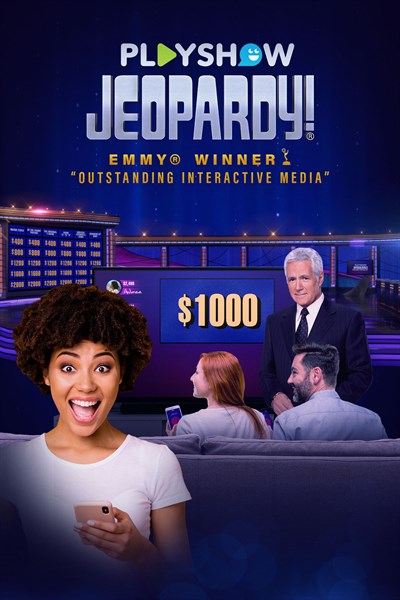 ☆☆☆☆☆ 31
★★★★★
$24.99
Get it now
Become a Jeopardy! Champion Now entering the studio is YOU. Compete against your friends —and past contestants— to test your knowledge using actual TV episodes hosted by Alex Trebek. Jeopardy! PlayShow combines your Xbox (or PC), your mobile device, and your very own voice for the most realistic gameshow experience you'll ever have. Win in Prime Time Simply buzz in and say your answer from your couch to be a part of the game like never before. And with Party Mode, you can host head-to-head, multiplayer competitions in your living room. It's everything you love about the show: Categories, Clues, Wagers, Daily Doubles and even signing your name to the podium. Play From Over 35 years of Historical Episodes Want more? With over 35 years of downloadable Jeopardy! content, play episodes thematically by season, tournament type, and even against famous champions. If Teen Tournament is your speed, we've got it. Want to travel back in time and match wits with legendary contestants? No problem! The true Jeopardy! gameshow has never been easier to experience. Features • Go head-to-head with memorable Jeopardy! contestants. • Choose from a variety of episodes and themes from over three decades of Jeopardy! • Your living room is the iconic game show set. Challenge friends and family to see who's the ultimate Jeopardy! fan. • Use innovative speech recognition! Buzz in and speak your answer. • Full immersive gameshow experience like never before!