Today, we’re honored to be checking another massive box off our horror bucket list as the Resident Evil Chapter finally makes its long-awaited debut in the Dead by Daylight.

Creative Director Dave Richard shares some insights on what Resident Evil’s inclusion means to the team, what fans can expect when they fire up the game, and how we pay tribute to the classic franchise with Killer and Survivor features never before seen in Dead by Daylight.

Associate Brand Manager Thomas Carpentier: How motivated were you to get Resident Evil into Dead by Daylight, and what did this mean to the team?

Creative Director Dave Richard: Dead by Daylight was built over the years to become a horror hall of fame where many of your favorite iconic horror characters and worlds can share a space and interact with each other. As the original survival horror experience, Resident Evil had a big impact on many of us. It holds a unique place in our hearts, and so we also wanted it to hold a unique place within our game.

It was a blast to work with these characters that we know and love, and to collaborate with developers that contributed to such mythical titles. I played these games in my teens and they hit my imagination in all the right ways. I still have my copies of the original Resident Evil games that I boot up once in a while for the memories. We’re thrilled to welcome this legendary franchise into the Dead by Daylight universe on our fifth anniversary, which coincides with the humbling 25th anniversary of Resident Evil.

TC: There are a lot of Resident Evil villains to choose from. Why Nemesis, and what makes him unique in Dead by Daylight?

DR: In Dead by Daylight, we love to feature classic characters that have a legacy whenever possible. Nemesis was a clear choice for us as it’s the most famous monster in the series. His appearance and power fit into our game perfectly.

Nemesis has a unique power for players to master – or adapt to if they are Survivors. Nemesis’ tentacle is a mid-range special attack that infects Survivors with the T-Virus, making them vulnerable and easier to attack unless they cure themselves with special vaccines found around the map. Nemesis is also our first-ever AI-assisted Killer! When facing him, a number of AI-controlled zombies will be roaming the map searching for victims so Survivors will need to watch out for them too!

TC: Same question for your Survivors. What drew you to Jill and Leon and how did they translate into Dead by Daylight?

DR: Jill and Leon are also some of the most notable characters in the Resident Evil franchise. Furthermore, they gave us the chance to feature both a male and female Survivor while making sure characters from both remakes (Resident Evil 2 & 3) were featured.

Both Jill and Leon feature three unique “support” and “offensive” Perks. Offensive Perks aren’t usually a common thing for Survivors, but they fit these characters perfectly. Jill’s “Blast Mine” allows her to set traps on generators that blind the Killer if he ever attempts to destroy them. Leon features a totally new type of Perk that we’ve never done in Dead by Daylight. It’s called “Flash-Bang” and it enables him to craft a flash grenade from scratch during a match, under specific conditions, which he can use to blind the Killer later.

TC: Final note on what Resident Evil fans can expect from this new Chapter?

DR: They can expect a new map of the Raccoon City police station – the biggest one we’ve ever created for Dead by Daylight, and of course a Killer and Survivors that come with lots of fantastic lore and nods to the original games. The team put great effort into recreating details the fans will recognize and included as many links and winks to the source material as possible… with a Dead by Daylight twist, of course. Plus, with the Legendary Sets available in our in-game store, players will even be able to play as Chris and Claire Redfield, creating the possibility of an all Resident Evil trial in the game!

That’s it for today, folks! A lot of love went into bringing the world of Resident Evil into Dead by Daylight and we can’t wait to see you guys wreak havoc with the Nemesis, lead your team with Jill and Leon, and explore every corner of our new map. See you in the Fog! 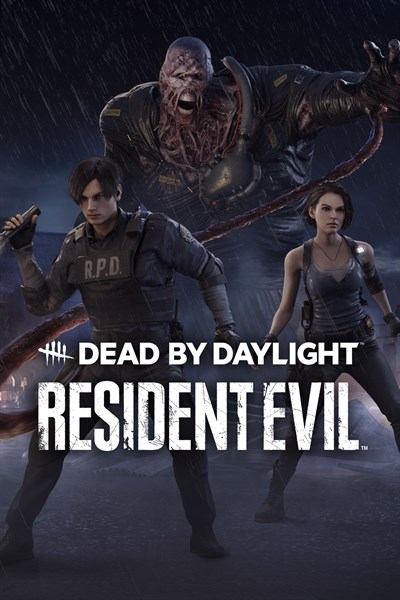 ☆☆☆☆☆ 143
★★★★★
$11.99 $10.79
Get it now
Resident Evil is a new Chapter for Dead by Daylight. It includes a Killer, Nemesis; two Survivors, Leon S. Kennedy and Jill Valentine; and a new map. Purchasing the add-on unlocks the new Killer, both Survivors, and an exclusive universal Charm: Umbrella Corporation. The Resident Evil Chapter includes a new map: The Raccoon City Police Station. Once home to the RPD’s elite S.T.A.R.S. unit, the labyrinthine hallways of this converted art museum are now overrun by the undead and host to a relentless evil. The new Killer is Nemesis. Take control of Umbrella’s bloodthirsty bio-organic weapon and hunt your targets without mercy. The new Survivors are Leon S. Kennedy and Jill Valentine. Unflinching in his mission to expose Umbrella, Leon has proven himself a true survivor since his first day with the RPD. Jill is a brilliant S.T.A.R.S. agent, one of the only surviving members of her unit, and a hard target for even the most unrelenting adversary.

☆☆☆☆☆ 1143
★★★★★
$29.99 $14.99
Get it now
Xbox Game Pass
Ever wished to play as one of the characters from your favorite horror movies? Dead by Daylight is a 1v4 multiplayer game that draws from all corners of the horror world from a powerful slasher to a terrifying paranormal entity. Choose between playing an unstoppable Killer and one of 4 Survivors trying to evade a gruesome death. Each character has their own deep progression system and plenty of unlockables that can be customized to fit your personal strategy. Work together to escape, or stalk and sacrifice every Survivor. This Edition of Dead by Daylight gives you access to a roster of 7 Killers (The Trapper, The Hillbilly, The Wraith, The Nurse, The Hag, The Huntress and The Doctor) and 9 Survivors (Meg Thomas, Claudette Morel, Jake Park, Dwight Fairfield, Ace Visconti, Nea Karlsson, Bill Overbeck, Feng Min and David King). It also includes two cosmetic add-ons packed with outfits for various characters.