I’m writing this moments after we found out that The Big Con has passed certification to be on Xbox One and Xbox Series X|S (where you can pre-order it right now!). It’s got me feeling a little nostalgic for the past three-and-a-half years of working on the game, so join me on this journey about how we got here, won’t you? (Insert “Wayne’s World” doodledy-doo screen effect here). Excellent.

All that we knew when we started was that The Big Con was going to be a game about a con artist. Hustling people, talking to people, and ultimately building on the gameplay of the adventure games from my youth — Day of the Tentacle, Zac McCraken, and of course, Monkey Island. Games that were about puzzles, and conversation, and most importantly, games that made me laugh. Even if it’s fun to be a grifter hustling people, I hoped that the game would make people feel like they’re clever con artists, and that they would get a few chuckles out along the way.

A lot of games about criminals are set in the ’80s, or the ’60s, or Los Santos (ahem), but we knew early on that The Big Con belonged in the early-mid-1990s. It’s a strange, liminal time for the world: the Internet hadn’t fully taken hold and almost no one had a cellphone (and those that did were real weirdos).

Picture it. If, hypothetically, a teenage con artist approached you and said she wanted to sell you a rare Burblo, you wouldn’t be able to text a friend or quickly Google to see if it was on the level. You just had to give the kid your money and hope she would get enough to save her video store, right? Wait. I’m getting ahead of myself.

We knew the game belonged in the ’90s. We’d get to bring in bright beautiful colors, vibrant backgrounds, and thick lines, and pay homage to cartoons and comics we grew up with, like “Doug,” or “Ghost World.” We could use words like rad.

But we wondered, who is this mysterious con artist?

In the 1990s the fastest growing cultural phenomenon was video rental stores. There were some mom-and-pop-shops, but big chains were rapidly becoming the only VHS rental game in town. It seemed like a great premise: A world-ending event for a small town teenage girl.

So Ali was born, a wisecracking, backwards-hat wearing young woman who is capable of solving any problem with quick wit (or a sneaky hand). With Ali came her mom Linda, a pushy-but-loving small town video store owner who just wants her daughter to be a famous trombonist one day. Then came the gangsters that are threatening to take it all away, and then the enigmatic grifter Ted that shows her how to steal the money she needs…

And who knew, Ali was pretty funny.

That kind of acerbic-not-rude sarcasm was a perfect fit for Ali, and bringing in Erika Ishii to voice her seemed like a perfect fit too; someone who has a positive attitude running under everything she does and can really bring the heat when she needs to.

And then there’s Rad Ghost. Oh, sorry, have I not mentioned there’s a character named Rad Ghost?

Ali’s imaginary friend / voice in her head / ghost of a former MTV-VJ is with her throughout her journey as someone to give her hints, support her, and remind her that the power is inside her (because, again, he is totally a rad hallucination). When I was describing this, were you picturing the voice of Dave Fennoy? Because we’ve been building this game for three years and let me tell you, I was thinking of Dave Fennoy the whole time. So hey, we brought him on board. (I’m trying to sound cool but am fully freaking out). No big.

So we had some of the best voice actors in the business, an art style that makes people smile, and a country-spanning journey to save a small-town video store. We got to watch as people played the game and beat levels in different ways, choosing who and how they wanted to con, and laughing their way through it. We got to make some amazing music, and that was before we hired Rockapella to make a music video… and then we got the news that we made it through cert, and that the game is coming out for Xbox One and Xbox Series X|S this month.

You should be all caught up now. I know, it’s a lot. It’s a lot of feelings when you look at them all in one big burst like this. Three years working on a comedy adventure game set in the 1990s has taught me there’s only one word for this feeling.

The word is rad, folks. 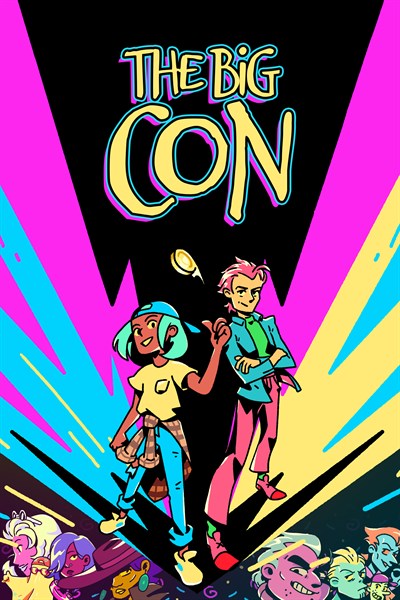 ☆☆☆☆☆ 20
★★★★★
$14.99
Get it now
Hustle and grift your way across America in the ‘90s as a teenage con artist on a crime-filled road trip adventure. Play as Ali, a curious and sarcastic high schooler who ditches band camp to go on a cross-country road trip. But this isn’t a joyride! Ali is on an all-important mission to save her family video store from the nasty loan sharks trying to shut their shop down. Swindle strangers, pickpocket people, and con commoners across a wacky America of the ‘90s. And – it should go without saying – lie to your mom about all of it. Choose who deserves to be conned and who might need a helping hand. The world is your oyster (and hey, pearls are worth a lot!). One Con Doesn’t Fool All Con people your way! Wear disguises, sneak around, eavesdrop on conversations, and learn how to approach each mark. Maybe you think you can make enough cheddar just by pickpocketing. Or seek out more complex grifts that involve breaking and entering, smooth talking, and more. It’s up to you to outsmart everyone and lockpick everything that stands between you and saving your mom's video store. A Coming-of-Age Comedy If there’s one surefire way to discover yourself, it’s by setting out on an adventure. Luckily for you, you’ve got the aid of an expert grifter to coach you in the elusive art of charm. But a life of crime is no laughing matter! Not unless you turn on the laugh track and make it a criminally funny sitcom. Get ready to talk your way into deals, hearts, and trouble. And don’t forget to call home every once in a while to check in with your mom. Sure, you might argue with her sometimes (most of the time?), but you’re a teenager – that’s kind of your job! The Weird and Wack 1990s the Way You Remember Them Whether you were a ‘90s kid or not, this game is brimming with nostalgia. It offers you the perfect opportunity to relive your own awkward high school years, or if you sadly missed out on the ‘90s, finally experience all of the classic teen movies that feel so old and outdated. Plaid, payphones, VHS tapes, and malls – THE BIG CON has got all of the outrageous fads you remember (and some you want to forget) from the 1990s. But most importantly – you can ride the Hormipillar as much as you want!